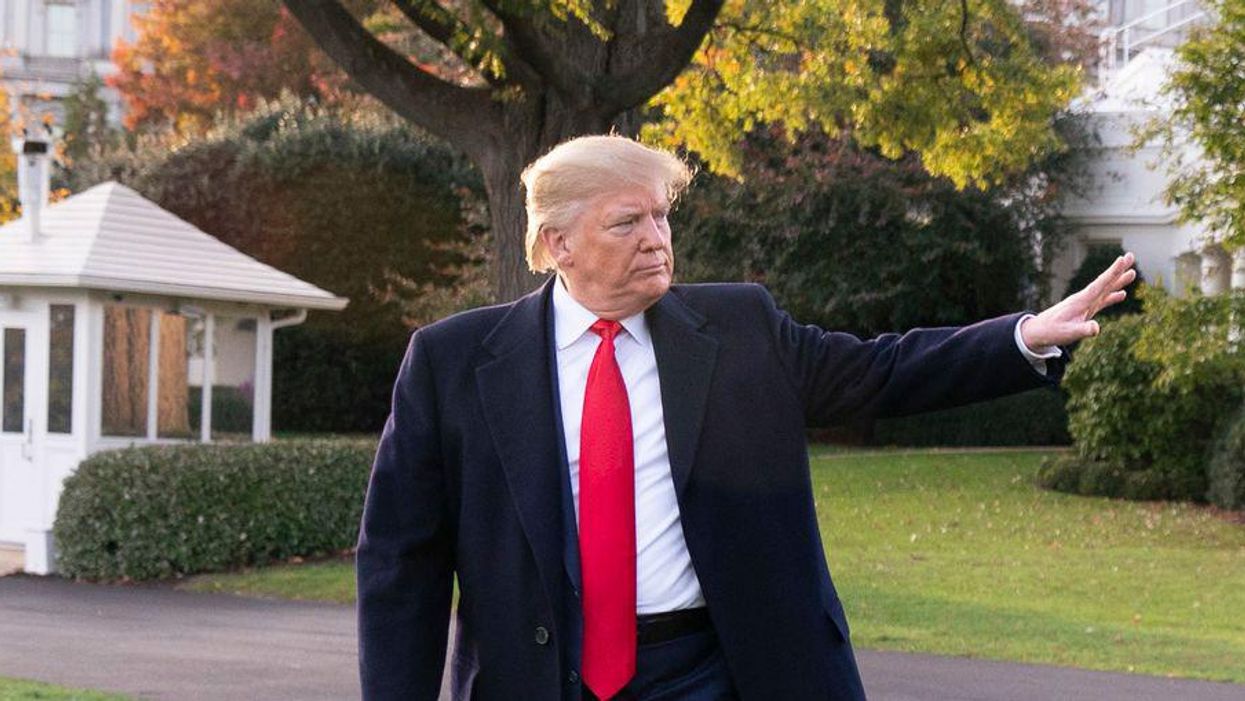 President Donald J. Trump waves after talking with reporters on the South Lawn of the White House Monday, Nov. 4, 2019, and walks to board Marine One to begin his trip to Kentucky. (Official White House Photo by Joyce N. Boghosian)
Kerry Eleveld
and
Daily Kos
August 06, 2021

The letter is simply damning. On Dec. 28, the Trump-era chief of the Justice Department's civil division emailed his colleagues with a plan to empower Georgia lawmakers to overturn the certified results of the state's elections.

Jeffrey Clark's appeal to both acting Attorney General Jeffrey Rosen and acting Deputy Attorney General Richard Donoghue was urgent and emphatic: He wanted them to sign on to a draft letter that suggested the department had found "significant" irregularities in Georgia's elections that "may have impacted the outcome," even though the claim was entirely untrue.

The letter endorsed calling a special session to address the matter and advised that if Gov. Brian Kemp declined to do so, "we share with you our view that the Georgia General Assembly has implied authority under the Constitution of the United States to call itself into special session for [t]he limited purpose of considering issues pertaining to the appointment of Presidential Electors."

In other words, Clark was asking the acting attorney general of the United States to put the full weight of the Department of Justice behind an illegitimate effort to nullify the will of the people. (Clark had also drafted similar letters to a handful of other swing states where Biden narrowly prevailed, according to Rep. Raja Krishnamoorthi of Illinois.)

"Personally, I see no valid downsides to sending out the letter," Clark wrote to Rosen and Donoghue, adding, "I don't think we should let unnecessary moss grow on this."

"No chance," Donoghue responded. Rosen agreed, and the letter never saw the light of day at the time. But that was only because Trump's intention to fire Rosen was disrupted by leaked audio of the bombshell call in which Trump personally urged the Georgia secretary of state to "find 11,780 votes."

Before news of that Jan. 2 call surfaced a day later, Trump had planned on firing Rosen and installing Clark to replace him as acting attorney general. Clark's intention was to stoke enough doubt about the integrity of the results in a half dozen states that he could prevent Congress from certifying Biden's victory. Earlier this year, the New York Times reported on a critical 3-hour meeting at the White House on Jan. 3 that included Trump, Rosen, Donoghue, Clark, then-White House counsel Pat Cipollone, his deputy Patrick Philbin, and several other lawyers. Trump was ultimately persuaded that firing Rosen would backfire, triggering a mass exodus at the Justice Department and sucking energy away from his ultimate goal of overturning the election.

Though we still lack many of the details surrounding the time period and Trump's communications with GOP lawmakers and others, what we do know is horrifyingly enough to draw some basic conclusions. It's now crystal clear that Trump and his allies were orchestrating a coup, even though we don't know exactly how widespread the effort was within the administration and among a wider array of Republican lawmakers. But a central hub linking many of the efforts was White House chief of staff Mark Meadows. According to fresh reporting from Just Security's Ryan Goodman, Meadows introduced Trump to Clark and also arranged Trump's find-the-votes call to Georgia election officials, among other things.

On Dec. 27—the day before Clark emailed Rosen and Donoghue—the two men sat on a call in which Trump pressured them to publicly suggest the election was marred by fraud.

"Just say the election was corrupt + leave the rest to me and the R. Congressmen," Trump urged, according to notes of the call taken by Donoghue. Both men also denied Trump's personal entreaties that day, but the Washington Post reports that Trump was contacting the two men on a near-daily basis.

On Dec. 28, Clark sent his email and draft letter to Rosen and Donoghue.

On Dec. 31, the White House switchboard called Republican Maricopa County Board chair Clint Hickman, but he didn't pick up.

On Jan. 3, the White House switchboard again phoned Maricopa board chair Hickman, but he again ignored the call.

On Jan. 3, Clark also informed Rosen of his intention to replace him as acting attorney general, precipitating the 3-hour White House meeting in which Trump ultimately backed off the plan.

Then came the pro-Trump rallies of Jan. 5 and 6, which cascaded into the Capitol insurrection.

Trump's personal coup attempt may have fallen just short of keeping him in office, but he and his allies proved shockingly successful in snowing a substantial majority of GOP voters about his defeat while unearthing absolutely zero evidence to back their claims of a stolen election.

Republican lawmakers across the country and a cartel of right-wing dark money groups like the Heritage Foundation and Federalist Society have since capitalized on the GOP's deeply misinformed electorate to codify into law both voter suppression and election subversion measures. The law Republicans enacted in Georgia, for instance, solidifies authoritarian rule loosely cloaked in democracy.

Left unchallenged, those laws will finish the job that Trump and his cronies started—a system where Republicans exclusively control both the administration and outcomes of U.S. elections, at least until some 60% to 65% of the electorate decides they have had enough.