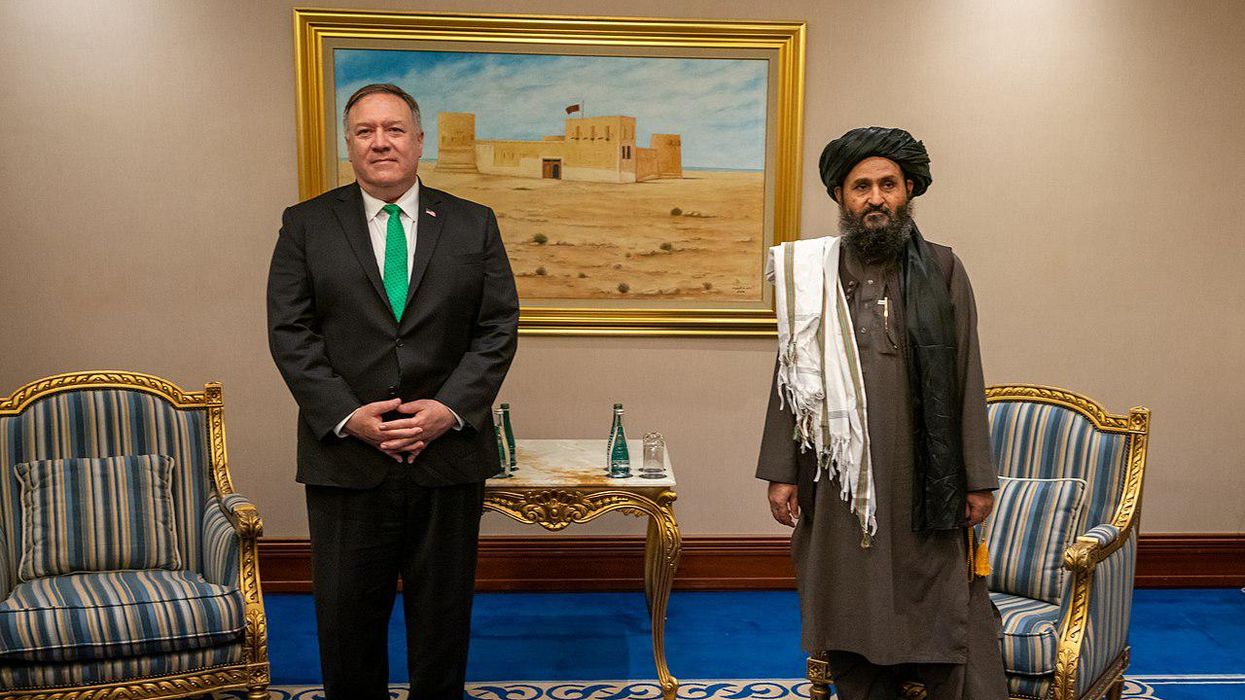 With the Taliban now in control of Afghanistan, former Secretary of State Mike Pompeo has been insisting that he had a perfectly solid plan for withdrawing U.S. troops from that country — and that President Joe Biden dropped the ball. But some Republicans, journalist Meridith McGraw reports in an article for Politico this week, aren't buying that and are saying that the Pompeo/Donald Trump plan for troops withdrawal was fundamentally flawed from the beginning.

Rep. Liz Cheney of Wyoming and Rep. Adam Kinzinger of Illinois are two right-wing Republicans who have been vehemently critical of both Biden and Trump over Afghanistan, arguing that the Trump/Pompeo plan for withdrawal was defective and that Biden was wrong to go along with it. And those House Republicans are not the only ones in the GOP who have been calling Pompeo out.

"While the chaotic drawdown of the war in Afghanistan has taken a toll on President Joe Biden's standing back home, it's also complicated political matters for one prominent Republican with eyes seemingly on the White House," McGraw explains. "Few GOP officials have been more intimately involved with U.S.-Afghan relations than Mike Pompeo, who as secretary of state, helped lead negotiations with the Taliban to lead to an end of the 20-year-old war. With that ending now mired in chaos, Pompeo has rushed to the airwaves to defend his work and differentiate it from the job that the Biden team is doing."

One of Pompeo's critics on the right, according to McGraw, is former National Security Adviser John Bolton.

The neocon war hawk told Politico, "Trying to extricate yourself from this withdrawal is, I think, difficult if not impossible to do, especially to rewrite history about what actually happened. I think that's a prescription for Democratic attack ads that would be fatal to someone's credibility."

Another former national security adviser for the Trump Administration, H.R. McMaster, is equally critical of Pompeo's negotiations with the Taliban.

During a recent appearance on the "Honestly" podcast, McMaster told host Bari Weiss, "Our secretary of state signed a surrender agreement with the Taliban. This collapse goes back to the capitulation agreement of 2020. The Taliban didn't defeat us. We defeated ourselves."

One of the places where Pompeo has been making nonsense claims about Afghanistan is Fox News. Pompeo told the right-wing cable news outlet, "We always knew that conditions had to be right. This administration just willy-nilly whipped the military out of there, leaving civilians, equipment, all of those things behind."

In fact, Biden didn't withdraw U.S. troops from Afghanistan as quickly as what Trump and Pompeo had in mind. Trump wanted to remove the troops during the spring if he won a second term; Biden wanted them out before the 20th anniversary of the September 11, 2001 terrorist attacks.

Bolton doesn't believe that things would be any better in Afghanistan if Trump were still in the White House. The former national security adviser told Politico, "The argument is Trump would have retaliated massively. Yeah, well, maybe — maybe not. Trump would have done what he thought would be politically beneficial. And what he thought was politically beneficial was getting out."