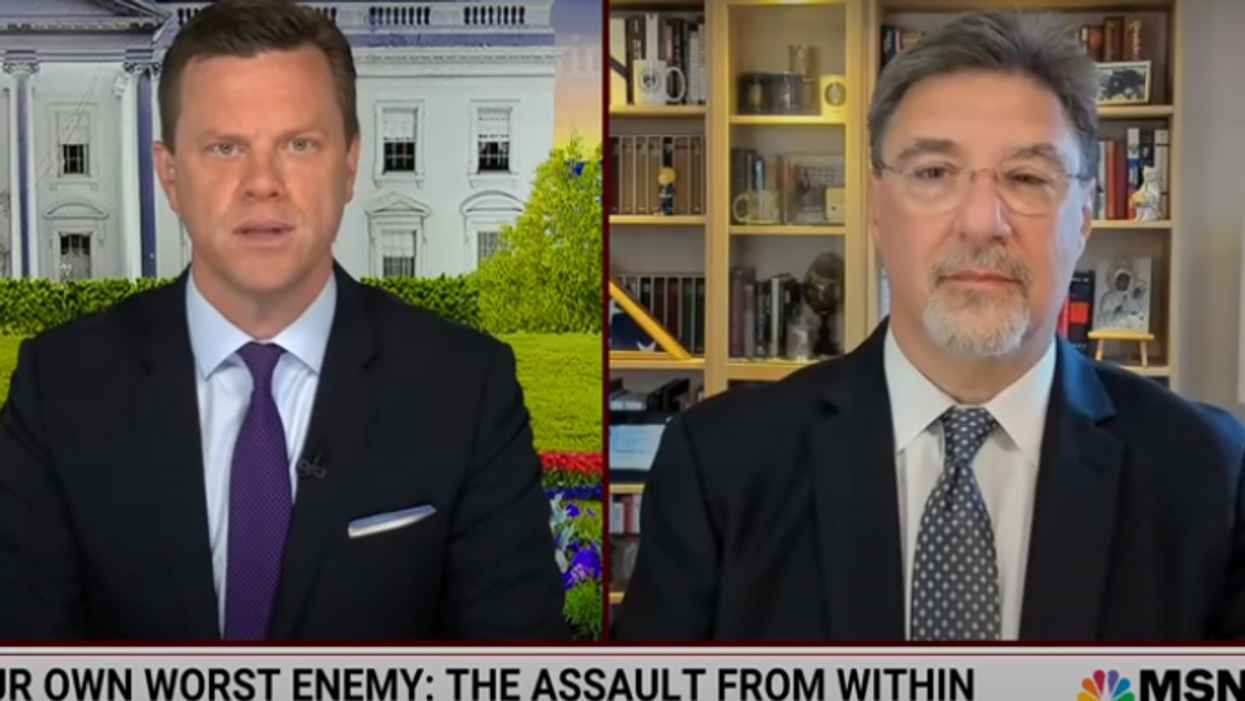 During an appearance on MSNBC's "Morning Joe," conservative commentator and U.S. Naval War College professor Tom Nichols went into an extended explanation about the rising tide of angry middle-aged white men that helped fuel the rise of Donald Trump and why their reasoning is dead wrong.

Promoting his book, "Our Own Worst Enemy: The Assault from Within of our Modern Democracy," Nichols explained that they are wallowing in "poisonous nostalgia" because they believe the world is coming apart before their eyes.

"We want to believe things are not our fault and things are so terrible and we would do better and wouldn't have to be so angry if things weren't so awful all the time," he told host Joe Scarborough. "Every age has its advantages and disadvantages. but the notion that somehow in 2021 -- when we're living longer, healthier, the world is mostly at peace, whether people want to believe that or not, it's true -- people want to believe this is the worst time ever, and it's a poisonous nostalgia that looks back and there's no way a democratic government can keep up with that unless they can invent a time machine."

With co-host Willie Geist asking about former president Donald Trump running on lost jobs as part of his "Make America Great Again" campaign, Nichols explained that the decline of industrial jobs is not a recent phenomenon.

"I do not come from a privileged family, my parents were Depression-era high school dropouts. I grew up among factories that by the time I was a child were empty and rotting, " he recalled. "I played in abandoned -- with abandoned equipment and empty factories and coal yards and railroad trestles. I write about that this morning in USA Today, there are two things about that. A lot of that happened before people were willing to admit that happened. I talked to a friend in a book and said I remember when all those factories were full. I said that was impossible we broke the windows in that factory when we were 11, like 50 years ago. People have convinced themselves there was once this golden age they remember that was only taken away in the last few years."

MSNBC contributor Katty Kay asked, "As we know the country is becoming less white, probably faster than we realized. To what extent is that feeding this sense of nostalgia amongst certain groups of the population? Particularly amongst white men who benefitted when it was white men who were running the show unquestionably? Is it overly simplistic to say that's driving some of the people out there saying things aren't as good for me as they used to be?"

"No," Nichols replied, "I think that's directly a cause of a lot of this. And, you know, again, there are some of these stories from my own hometown where people that I grew up with who are now prosperous. I had a friend who, you know, working-class guy I went to school with since we were small children, spends his weekends on his boat, and he says everything is changed, it's awful."

"What he means is the street we grew up on, we had a neighborhood barber, candy store and diner, and one of them is an antique shop now, another is a Spanish storefront church, and the library is closed," he elaborated. "He just wants it to be -- it's like a mid-life crisis for a lot of white males for whom they want it to be 1969 again. I think that the problem of becoming a minority is really anxiety-producing for a lot of them. But again, the answer to that is more democracy, not some kind of illiberal backlash and trying to turn the clock back by force. But they've been told by politicians and political entrepreneurs that with just enough willpower and rage and anger and resentment they can turn the hands of time back and, you know, make it 1965 again."

"I think anyone who is nostalgic for the 1970s - I talk about this in the book -- people see the 70s as a benchmark," he added. "I was a teenager in the 70s and I can I not imagine a decade I would rather not go back to in my hometown and the way I grew up. But people have, you know, sanitized these memories and turned them into sepia-toned photographs if their minds that aren't true."