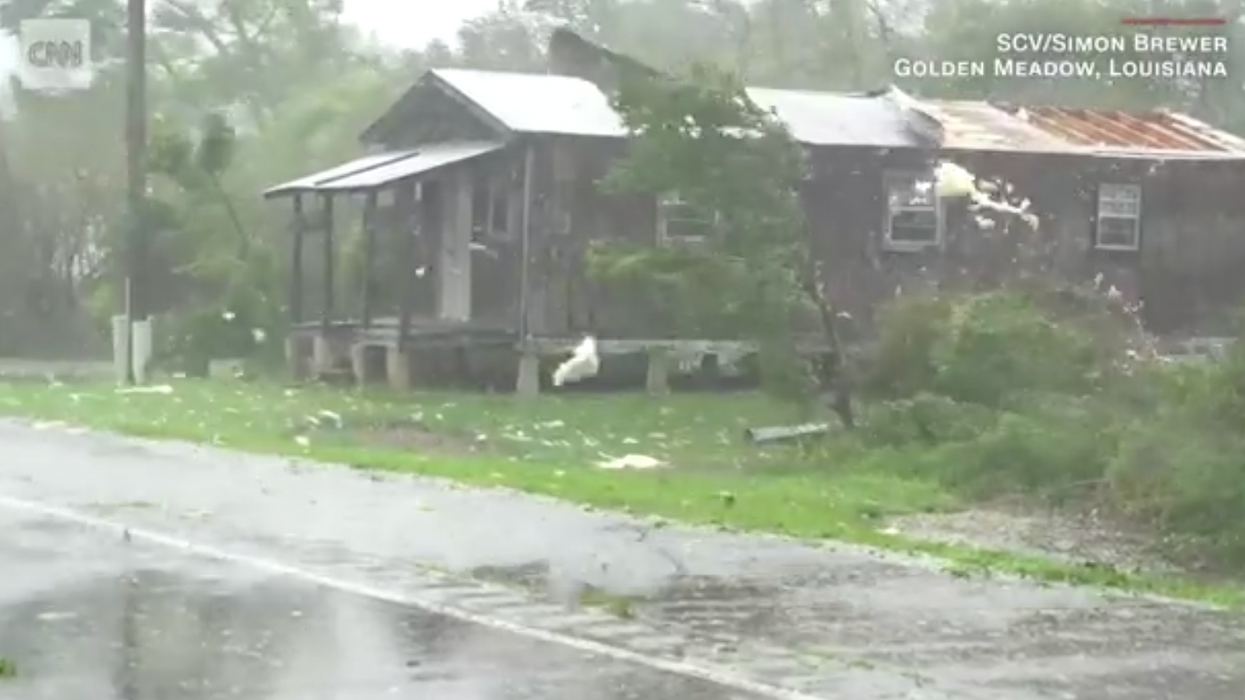 More than a million Louisiana residents were without power Monday morning and at least one person was reportedly killed as Hurricane Ida pummeled the Gulf Coast of the United States, causing life-threatening flooding, lashing homes and buildings with powerful wind, and slamming the industry that some experts blamed for the catastrophic storm.

CNN reported late Sunday that "more than 95% of the Gulf of Mexico's oil production facilities have been shut down" due to Hurricane Ida, which "could impact the major pipelines that carry fuel from the Gulf Coast to the East Coast markets."

According to the local Times-Picayune, "About two-thirds of Louisiana industrial sites with toxic chemicals lie in the path of Hurricane Ida."

When it made landfall in Louisiana on Sunday—the 16th anniversary of Hurricane Katrina—Ida was a Category 4 storm with peak winds as high as 150 mph, according to the National Hurricane Center (NHC). As Ida barreled toward the state, Gov. John Bel Edwards warned that it "will be one of the strongest hurricanes to hit anywhere in Louisiana since at least the 1850s."

By late Sunday, President Joe Biden had approved Edwards' request for a federal major disaster declaration and rescue teams from more than a dozen states prepared to mobilize to help Louisianans trapped on their rooftops or otherwise stranded. Local officials warned that residents could be without power for days, and possibly longer.

"Tonight, we have confirmed at least one death and sadly, we know there will be others," Edwards said in a statement Sunday. "Thousands of our people are without power and there is untold damage to property across the impacted parishes."

While Ida has since been downgraded to a tropical storm as it hits southwestern Mississippi, NHC warned early Monday that "dangerous storm surge, damaging winds, and flash flooding continue over portions of southeastern Louisiana."

Writing for the Washington Post Sunday evening, climate reporter Sarah Kaplan argued that "from its birth, the storm was destined to become a monster."

"It formed from air that was hot, moist and thick with clouds. It incubated in the sultry Gulf of Mexico, drawing power from water that was unusually warm," Kaplan observed. "By the time Hurricane Ida made landfall in Port Fourchon, Louisiana on Sunday, it was the poster child for a climate change-driven disaster."

Others echoed Kaplan's assessment, attributing the severity of the storm to climate conditions fostered by human activity—principally, the burning of fossil fuels.

"As you watch from afar in horror, remember: it's fossil fuels. It's been fossil fuels for a very long time," said climate writer Emily Atkin, pointing to the Intergovernmental Panel on Climate Change's recent conclusion that "fossil fuel combustion is responsible for 64% of the increase in human-caused carbon dioxide emissions since 1750, and responsible for 86% of emission growth over the last 10 years."

"The dystopian horrors we're all witnessing are only going to get worse if we keep extracting and burning fossil fuels," Atkin continued. "Climate scientists have been extremely clear about this for many, many years."

Meteorologist Eric Holthaus wrote Sunday that the "full might" of the U.S. "needs to be focused on a Green New Deal—a new relationship with the planet and with each other that can bring a better world for everyone."

"That starts by ending the fossil fuel industry," Holthaus argued. "As New Orleans fills with water once again from another once-a-century storm, remember that fossil fuel executives knew about climate change decades ago and decided they'd rather be rich than have a habitable planet."