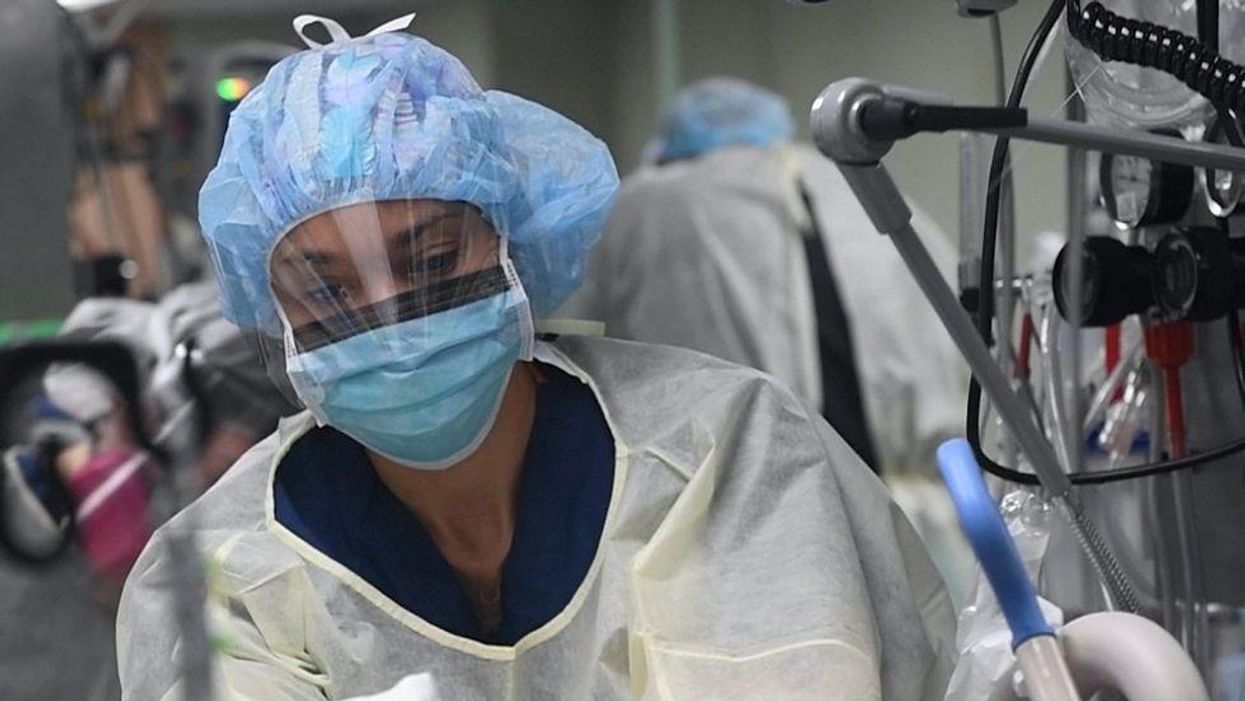 A handout photo made available by the US Navy shows Lt. j.g. Natasha McClinton, an operating room (OR) nurse, preparing a patient for a procedure in the intensive care unit (ICU) aboard the US hospital ship USNS Comfort (T-AH 20) in New York, New York, USA, 23 April 2020 (issued 26 April 2020), during the coronavirus disease (COVID-19) pandemic. Comfort, which cares for critical and non critical patients without regard to their COVID-19 status, is working with Javits New York Medical Station as an integrated system to relieve the New York City medical system. EPA/US NAVY/MC2 SARA ESHLEMAN HANDOUT HANDOUT EDITORIAL USE ONLY/NO SALES Dostawca: PAP/EPA.
John Stoehr
August 25, 2021

The Centers for Disease Control and Prevention released a new report showing the dominant delta variant of the coronavirus is now making vaccines against catching it less effective. Before delta, they were 91 percent effective. After delta, they are 66 percent effective. The United Kingdom and Israel have reported similar findings. Vaccines are still preventative, the CDC said, and booster shots were already in the works. The Food and Drug Administration is preparing to sign off on a booster campaign set to begin Sept. 20, according to Bloomberg.

The spread of the delta variant is why the nation's top infectious disease expert, Anthony Fauci, went on CNN to say getting the covid pandemic under control might not happen until spring of next year. "As we get into the spring, we could start getting back to a degree of normality, namely resuming the things that we were hoping we could do — restaurants, theaters, that kind of thing," he said. This news, according to CNN's Stephen Collinson, came as a "severe jolt to a weary nation" that elected Joe Biden to take care of this problem.

Collinson's argument is that the delta variant poses a great danger to the president's domestic agenda, but especially his party's majorities in the United States Congress. "The pandemic that he was elected to end could drag on deep into a midterm election year, with all the political and economic destruction that could bring." Collinson added that Fauci's statement "meant that Biden's best-laid plans of triumphing over the pandemic and riding an economic wave into the campaign for congressional election results in November next year now look at risk."

I'll get back to Collinson's piece and the delta variant in a moment. But first I want to bring in a theme I've been writing about this week: bad faith. In a nutshell, the Washington press corps is not biased in the ways that the Republicans Party says it is. It is not liberal. It does not have an agenda (other than the normal ones, like informing the citizenry or turning a profit). But the Republicans are right in one very important way. It is biased to the extent that it tolerates endless bad faith. Moreover, it tolerates bullshit knowing it's bullshit. On the infrequent occasion when reporters do demonstrate "liberal bias," it's when they demonstrate unwillingness to tolerate Republican bad faith.

What does this have to do with the delta variant? First, it's the reason the pandemic isn't over yet. And the reason for delta's dominance is pretty clear. As Collinson himself says: "The latest surge of the virus, powered by the more infectious Delta variant, was able to take hold because Americans in more conservative, southern states — deeply skeptical of government advice and science — declined in larger numbers than their more liberal compatriots to get vaccinated. If such skepticism, fanned by conservative political leaders and conspiracy fueled right-wing media, were to ultimately boost Republicans in next year's congressional polls it would be a bitter irony for the President."

So when it comes to the question of why the president hasn't done what he said he was going to do, we have to take into account, if we're being honest with ourselves and others, that Biden isn't alone here. There are 50 states in the union, each with their own leaders who make choices they think are best for their constituents. Moreover, you could say, again in all honesty, that the president's plan to get the country back on its feet depended on "more conservative, southern states" doing their part in what is and must be a united effort to overcome a disease that will kill a million Americans before it's over.

Again, honestly, they failed to do their part. Those of us who did are going to suffer. Delta's spread means vaccines are now less effective. As I said last week, this minority is stealing the majority's freedom.

Even this might not be so bad if not for the suggestion, illustrated by Collinson's piece, that voters might punish Biden for failing to control the pandemic while at the same time saying in plain English that the reason it's not under control is because "conservative, southern states — deeply skeptical of government advice and science" have put that objective even farther out of reach. A moral press would make it clear to the citizenry who's to blame. An anti-moral press, one that's hostile toward the obligations of the truth, will make-believe it's hard to say.

I said the press corps often tolerates bullshit knowing it's bullshit, but it often does not. Collinson isn't alone in this. He said southern states are "deeply skeptical of government advice and science." Another variation of this that's echoed by the press corps is that residents of southern states fear losing their freedoms. Residents fear it so much they're willing to put their lives on the line. They'll refuse to get vaccinated. They'll refuse to wear masks. They'll defy "government tyranny." This is the conclusion drawn by the Times' Alexander Stockton and Lucy King in a searing new video op-ed. They went to the Ozarks to better understand anti-vaxers. Over and over, they were told they don't want to be told what to do. Living in America means living free! What Stockton and King don't know is it's all bad faith.

The people Stockton and King interview, including the white men literally dying in hospital beds, do not fear losing their freedoms. That it is a put-on. They're hiding what they truly fear, which is humiliation. Authoritarian-minded people — which is to say, those who determine politics in southern states — live in daily fear of being humiliated. By what? You name it. Living in a diverse, democratic and capitalist republic offers opportunities aplenty to be humiliated for those who identify strongly with top-down social control. Anything threatening that threatens them. Since the pandemic started as "a hoax," it is a hoax. Buh Gawd, they'll die before being wrong. And they do.

Stockton and King don't have the insight necessary for seeing what they truly fear, but they do something I haven't seen from other members of the pundit corps. They take "fearing the loss of their freedoms" and superimpose the claims over images of imminent death, as if to suggest that freedom to die from the covid is no freedom at all. At one point the narrator says: "This is what freedom looks like in America today." I have never seen a simpler and more powerful way of rejecting GOP bad faith. It's something we all of us need to see more.