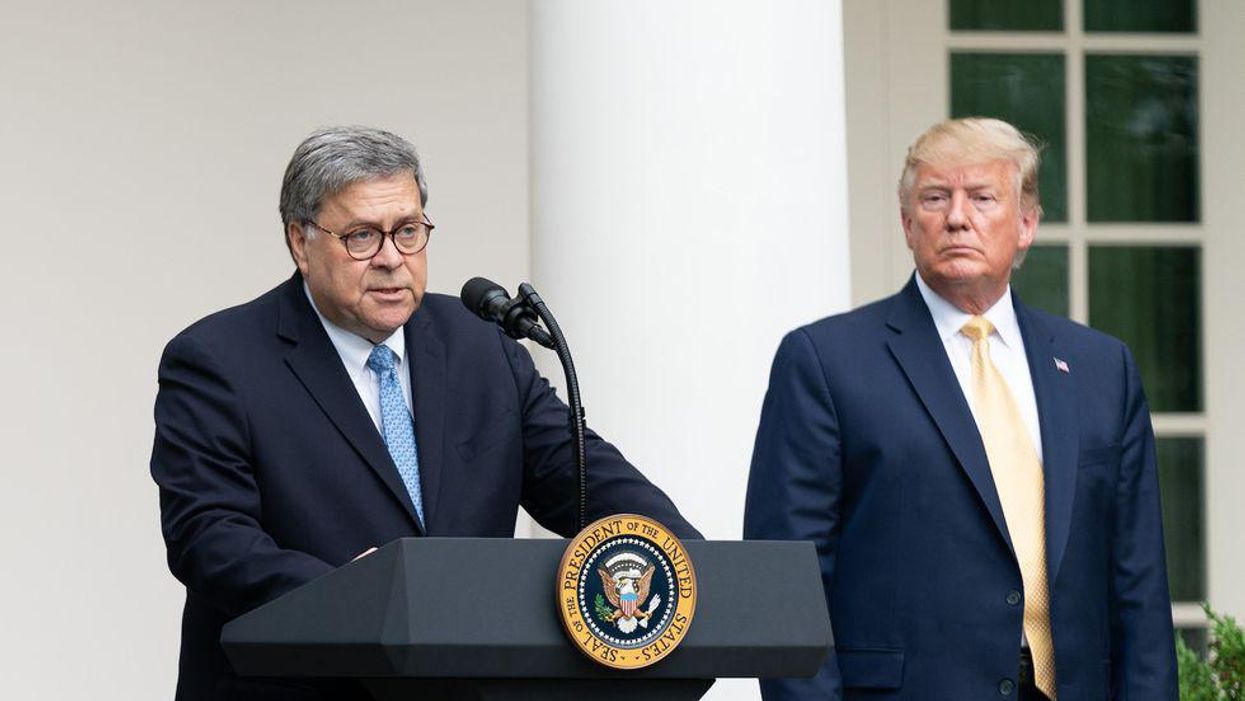 President Donald J. Trump, joined by Secretary of Commerce Wilbur Ross, listens as U.S. Attorney General William Barr delivers remarks Thursday, July 11, 2019, in the Rose Garden of the White House to expand on President Trump’s Executive Order requiring every department and agency in the federal government to provide the Department of Commerce with all requested records regarding the number of citizens and non-citizens in the United States. (Official White House Photo by Shealah Craighead)
Igor Derysh
and
Salon
August 20, 2021

The Justice Department "deliberately targeted" supporters of the Black Lives Matter movement with harsh prosecutions at the "express direction" of former President Donald Trump and former Attorney General Bill Barr, according to a new report from the advocacy group Movement for Black Lives.

The report detailed 326 criminal cases brought by federal prosecutors related to last year's protests following the police killings of George Floyd in Minneapolis and Breonna Taylor in Louisville. Federal prosecutors aggressively sought jurisdiction over the cases even though in more than 92% of the cases there were equivalent state-level charges that could have been brought instead, according to a data analysis by the Creating Law Enforcement Accountability & Responsibility (CLEAR) clinic at the City University of New York School of Law. Federal prosecutions result in conviction at much higher rates than state charges and nearly 90% of federal charges filed against protesters carried stiffer penalties than equivalent state charges.

Federal prosecutors "exploited the expansive federal criminal code" to assert jurisdiction over cases that "bore no federal interest," the report said. Prosecutors often cited federal jurisdiction in alleged offenses that happened near federal property, affected property that receives federal funding, or had some tenuous connection to interstate commerce. "The government greatly exaggerated the threat of violence" from protesters, the report said, noting that the "vast majority" of charges were for nonviolent offenses or restricted to property destruction.

Prosecutors in more than 25% of cases also "stacked" charges against defendants with multiple redundant charges stemming from the same act to increase potential sentences or coerce guilty pleas, the report said. The only two violent charges related to murder were brought against counter-protesters who were reportedly members of the far-right Boogaloo Bois.

"The empirical data and findings in this report largely corroborate what Black organizers have long known intellectually, intuitively, and from lived experience about the federal government's disparate policing and prosecution of racial justice protests and related activity," the report said, drawing comparisons between last year's federal crackdown to how the federal government historically used Counterintelligence Program techniques to "disrupt the work of the Black Panther Party and other organizations fighting for Black liberation."

"We want to really show how the U.S. government has continued to persecute the Black movement by surveillance, by criminalizing protests, and by using the criminal legal system to prevent people from protesting and punishing them for being engaged in protests by attempting to curtail their First Amendment rights," Amara Enyia, the policy research coordinator for The Movement for Black Lives, told the Associated Press, which first reported the findings. "It is undeniable that racism plays a role. It is structurally built into the fabric of this country and its institutions, which is why it's been so difficult to eradicate. It's based on institutions that were designed around racism and around the devaluing of Black people and the devaluing of Black lives."

The federal push came after directives from Trump and Barr to target protesters, which the report argued was intended to "disrupt the movement." The largest number of federal prosecutions took place in Portland, where the Trump administration deployed a heavy-handed federal force that snatched up protesters who were in the vicinity of federal buildings, followed by Chicago, Las Vegas, Washington D.C., and Minneapolis. More than 80% of federal charges were brought in states led by Democrats and were disproportionately brought in that Trump designated "anarchist cities," including Portland, New York, and D.C.

Barr in May of last year claimed that "anarchistic and far-left extremists" and "outside radicals and agitators" were hijacking the protests and vowed to enforce laws against crossing states lines using interstate facilities to "incite or participate in violent rioting." He directed the FBI's Joint Terrorism Task Force to go after what he described as "domestic terrorism."

Trump in June of 2020 said he was "mobilizing all available federal resources -- civilian and military -- to stop the rioting and looting." He vowed to intervene "if a city or a state refuses to take actions that are necessary to defend the life and property of their residents." Shortly after, he signed an executive order urging the Justice Department to crack down on protests in Democratic-led cities and states.

Barr in a leaked memo in September 2020 urged prosecutors to aggressively target protesters that "cause violence," even suggesting sedition charges.

Research has found that 93% of protests last summer did not see any violence or property destruction but prosecutors "weaponized" their discretion to go after protesters in Democratic-led cities, the report said, and the vast majority of charges were not related to violence against people. And despite the administration's cries about "anarchists," only one criminal defendant was a self-identified member of the anti-fascist collective antifa. The most common charge was arson, which accounted for 32% of the arrests analyzed, because prosecutors used the expansive law to also charge people accused of "conspiring" to commit arson and other acts "not limited to the setting of a fire." More than 22% of charges involved mandatory minimums and more than 20% of cases involved "inchoate offenses, "where a defendant is accused of having attempted, conspired, or aided a crime without actually having committed that crime.

"We saw U.S. Attorney General Bill Barr overnight go from expressing some level of sympathy for racial justice protesters to labeling them as radical and violent agitators with absolutely no basis for that sort of characterization," Ramzi Kassem, the founding director of CLEAR and a law professor at CUNY, told the AP. "All of this was very transparently aimed at disrupting a Black-led movement for social justice that was happening both spontaneously and in an organized fashion nationwide."

The report also drew a contrast between Trump's rhetoric related to the Black Lives Matter protests, where a disproportionate number of arrests were Black men, and his statements about protests against Covid restrictions going on around the same time.

"These are very good people, but they are angry," Trump tweeted last summer. "They want their lives back again, safely! See them, talk to them, make a deal."

The Movement for Black Lives in the report called for amnesty for all protesters involved in the demonstrations and ending the use of the Joint Terrorism Task Force in local communities. The group also called for the passage of the BREATHE ACT, which would shift funding from policing to community-based public safety programs, and reparations from the government that includes "acknowledgment of and an apology for the long history of targeting movements in support of Black life and Black liberation."

"Regardless of how we are often painted, activists are people who have the audacity to believe that we can live in a better world, where people are safe, where people are not afraid of being murdered by the police," Green said. "There are attempts to stifle our movement but it is truly a reflection to our supporters, to our allies, and to the folks who showed up in the streets last year, of how beautiful and powerful this movement is."