Democrats' may have a glimmer of optimism ahead of midterm elections: Trump's dark cloud 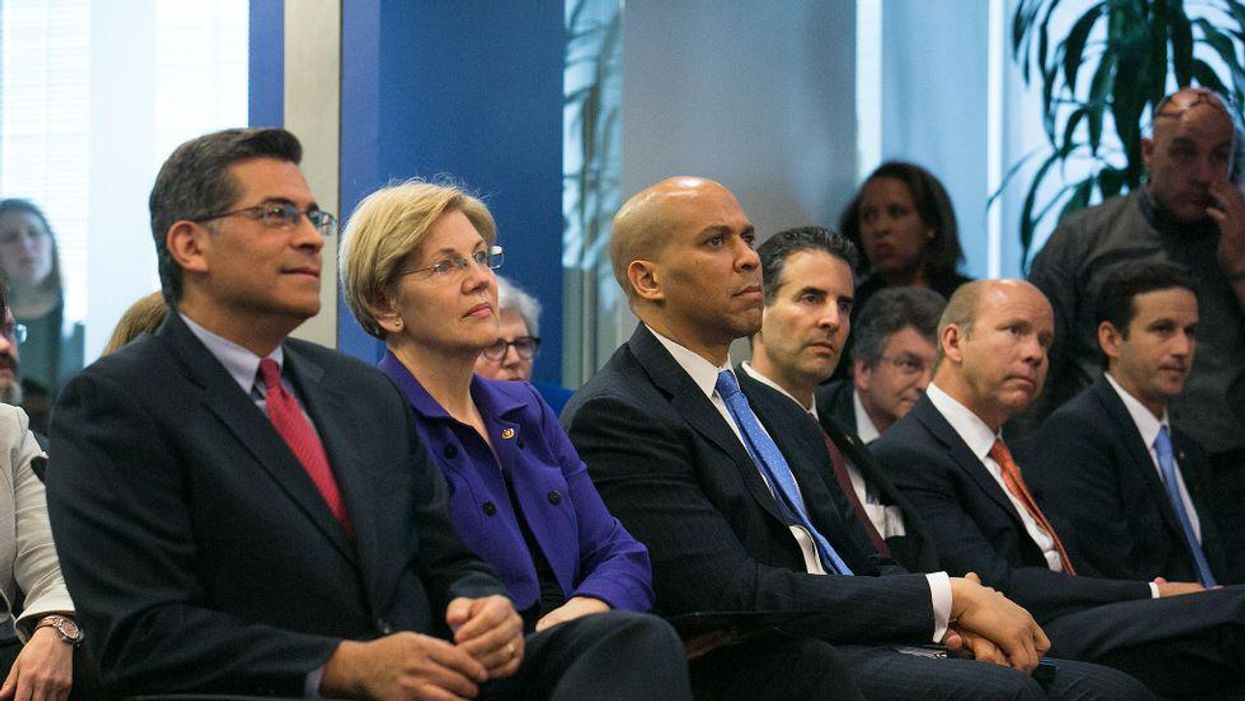 6 April 2016 - Washington, D.C. - Secretary of Labor Thomas E. Perez discusses the Conflict of Interest Rule at the Center for American Progress with (from left to right) Congressman Xavier Becerra; Senator Elizabeth Warren; Senator Cory Booker; Congressman John Sarbanes.Congressman John Delaney (Panelist); ..***Official Department of Labor Photograph***.Photographs taken by the federal government are generally part of the public domain and may be used, copied and distributed without permission. Unless otherwise noted, photos posted here may be used without the prior permission of the U.S. Department of Labor. Such materials, however, may not be used in a manner that imply any official affiliation with or endorsement of your company, website or publication..Photo Credit: Department of Labor - Alyson Fligg
Meaghan Ellis
July 17, 2021

The preliminary Senate maps appear to suggest Democratic senators may have a slight glimmer of optimism ahead of the 2022 midterm elections. Although the Georgia Senate runoff is now in the past, some remnants of the issues Republicans faced then are still issues now. The New York Times laid out a number of Republican weaknesses Democrats can seize on.

With four Senate Democratic incumbents facing re-election in swing states — New Hampshire, Nevada, Arizona, and Georgia — in the 2022 primary, Republican candidates are hoping to take advantage of the moment. However, they face a number of hurdles in doing so.

According to the publication, former President Donald Trump's influence is still casting a dark shadow over the Republican Party. In fact, his influence is still so dominant that many political candidates are facing difficulty in determining how closely they should align with the former president's rhetoric and belief systems. Even though Trump no longer has a social media presence, he has still managed to have a solid influence on the political party often interacting with his loyal base by way of rallies

Democratic senators in some red states also appear to be ahead financially as well.

"Swing-state Democratic incumbents, like Senators Raphael Warnock of Georgia and Mark Kelly of Arizona, restocked their war chests with multimillion-dollar sums ($7.2 million and $6 million, respectively), according to new financial filings this week. That gives them an early financial head start in two key states where Republicans' disagreements over former President Donald J. Trump's refusal to accept his loss in 2020 are threatening to distract and fracture the party."

Another area of concern for Republican lawmakers is having viable candidates. Out of all four swing states up for grabs in 2020, Republicans do not have one dominant candidate in any of them. So can Republicans pull off a win in the upcoming primary? According to Republican strategist Alex Conant, there are a few reasons why Republicans may face hurdles on the campaign trail.

The answer to Conant's question has yet to be determined.