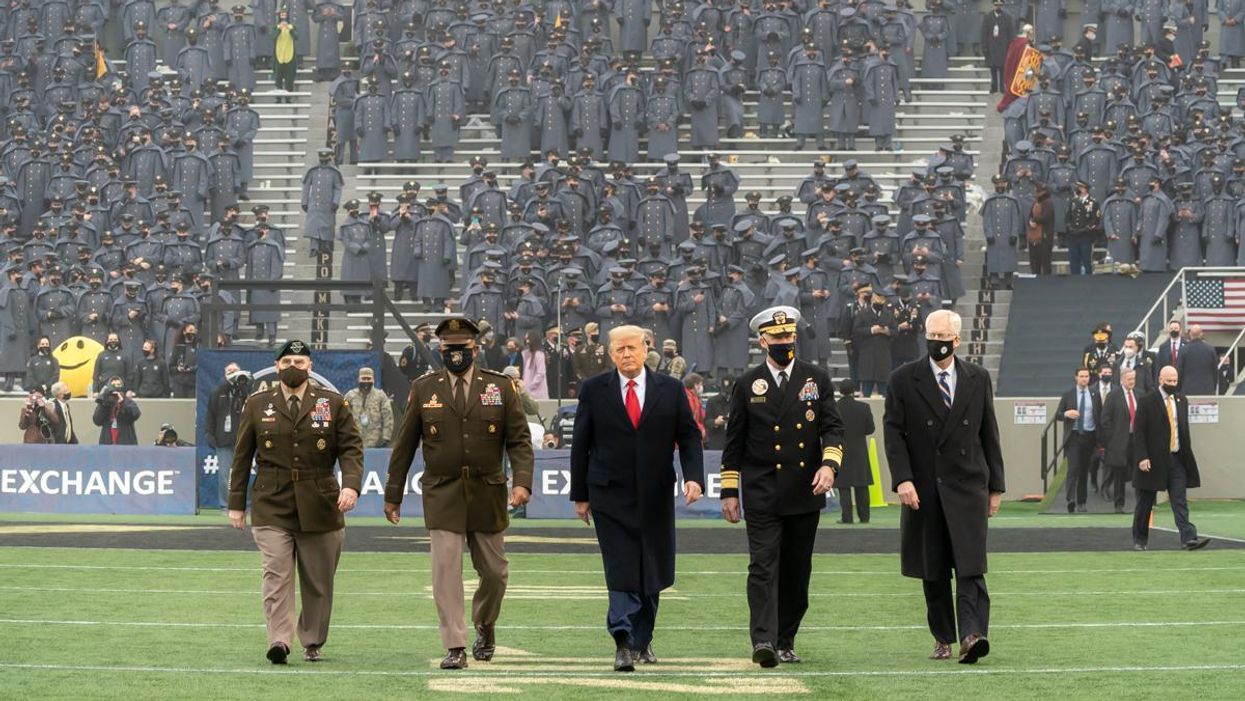 President Donald J. Trump, joined by acting Secretary of Defense Christopher C. Miller and the Chairman of the Joint Chiefs of Staff Gen. Mark A. Milley, walks out on to the football field Saturday, Dec. 12, 2020, to participate in the coin toss prior to the start of the 121st Army-Navy football game at Michie Stadium at the U.S. Military Academy at West Point, N.Y.

In the days leading up to Jan. 6, General Mark Milley, the chairman of the Joint Chiefs of Staff, had deep concerns about former President Donald Trump and the level of desperation he might resort to in order to stay in power, according to new reporting. In the book "I Alone Can Fix It: Donald J. Trump's Catastrophic Final Year," Washington Post writers Carol Leonnig and Philip Rucker detailed Milley's concerns prior to the insurrection.

While Milley was confident that Trump would fail at attempts to remain in power, the book did note how worried he was about the possibility of an attempted coup.

According to The Washington Post, Leonnig and Rucker explained how Milley "compared it to a "Reichstag moment" — i.e. the rhetoric Adolf Hitler used after an arson attack on Germany's government to gain absolute political power."

An excerpt from the book reads:

"As Trump ceaselessly pushed false claims about the 2020 presidential election, Gen. Mark A. Milley, chairman of the Joint Chiefs of Staff, grew more and more nervous, telling aides he feared that the president and his acolytes might attempt to use the military to stay in office, Carol Leonnig and Philip Rucker report in "I Alone Can Fix It: Donald J. Trump's Catastrophic Final Year."

Milley described "a stomach-churning" feeling as he listened to Trump's untrue complaints of election fraud, drawing a comparison to the 1933 attack on Germany's parliament building that Hitler used as a pretext to establish a Nazi dictatorship."

If someone wanted to seize control, Milley thought, they would need to gain sway over the FBI, the CIA, and the Defense Department, where Trump had already installed staunch allies. "They may try, but they're not going to f---ing succeed," he told some of his closest deputies, the book says.

In the weeks that followed, Milley played reassuring soothsayer to a string of concerned members of Congress and administration officials who shared his worries about Trump attempting to use the military to stay in office. "Everything's going to be okay," he told them, according to the book. "We're going to have a peaceful transfer of power. We're going to land this plane safely. This is America. It's strong. The institutions are bending, but it won't break."

When the top-ranking military official conveyed his statement, he intensified his stance insisting the commentary is "irresponsible."

"I want to remind you and the American public that during that time there was irresponsible commentary by the media about a possible military coup or that advisers to the president were advocating the declaration of martial law," Milley said.

Milley wasn't the only military official with these concerns. Christopher Miller, who served as acting Defense secretary in the last days of the Trump administration, told Vanity Fair that he had three goals during that period: "No military coup, no major war, and no troops in the street."