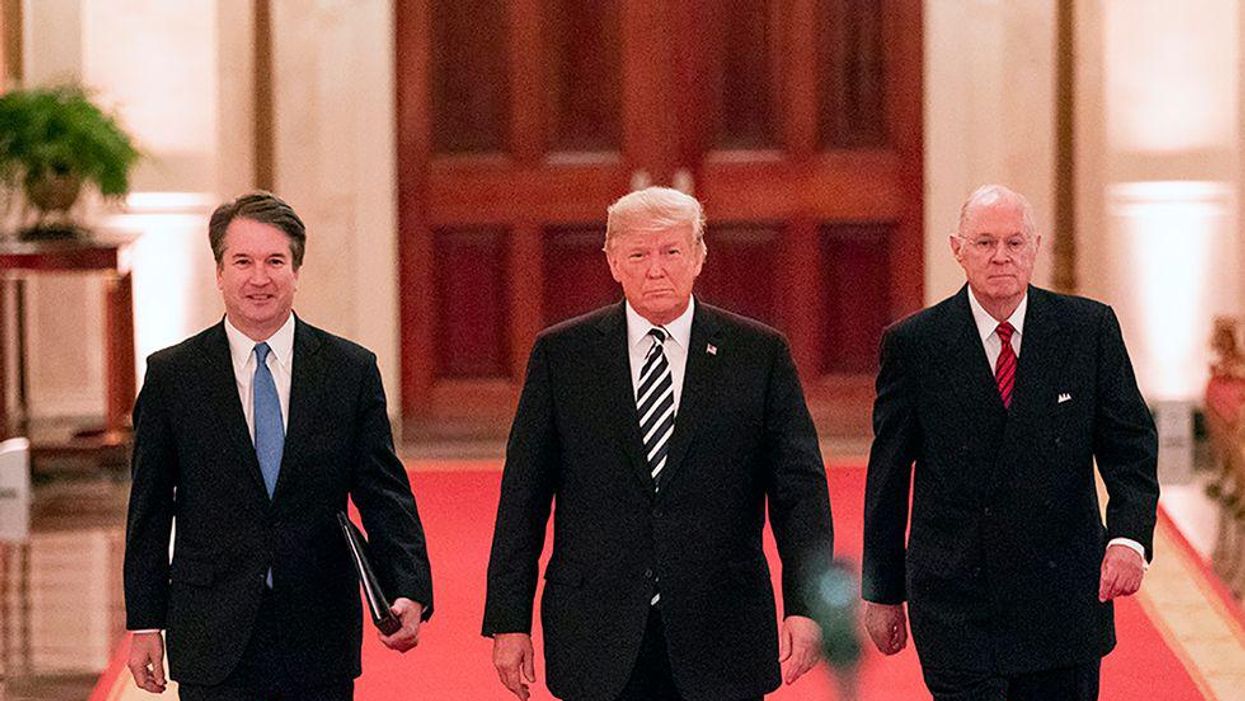 It may be hard to remember after the roller coaster of a news cycle we've all been riding for the past few years, but during the 2018 confirmation hearings for Donald Trump's Supreme Court appointee Brett Kavanaugh, Republicans actually bothered trying to create the appearance that they took allegations of sexual assault seriously. Republicans on the Senate Judiciary Committee were clearly concerned about looking like they were being dismissive or rude to the woman who stepped forward to accuse Kavanaugh of attempted rape in high school, Christine Blasey Ford. They were so worried, in fact, that the male-only Republican side of the panel hid behind a female interlocutor, Rachel Mitchell, who was hired to question Blasey Ford for them.

The whole thing was just an act, of course. That was obvious at the time, because the Republican-controlled Judiciary Committee, while allowing Blasey Ford to testify, refused to call other potential corroborating witnesses, including a woman who claimed to have had a similar encounter with Kavanaugh in college. But a new report this week underscores the phoniness of Republican claims to take allegations of sexual assault seriously.

The supposed FBI investigation of Kavanaugh that the Trump White House and Senate Republicans ordered — and then used to claim Kavanaugh was exonerated — is looking more sham-like. The newest revelation is that, while the FBI got over 4,500 calls on their tipline about Kavanaugh, the ones deemed relevant were merely passed onto Trump's White House, who almost certainly tossed them in File #13.

"If the FBI was not authorized to or did not follow up on any of the tips that it received from the tip line, it is difficult to understand the point of having a tip line at all," a group of Democratic senators, led by Sen. Sheldon Whitehouse of Rhode Island, wrote in a letter to FBI Director Christopher Wray. Whitehouse followed up with a Twitter thread, making clear how much he believes this "investigation" was a hatchet job:

I charged that the “tip line” was really a tip dump, with all the tips going straight into the dumpster without inv… https://t.co/sUiHuWnW9A
— Sheldon Whitehouse (@Sheldon Whitehouse) 1626969981.0

In the months and years after the Kavanaugh hearing, it's become common wisdom on the right that Kavanaugh was done dirty and that the whole situation was proof that the #MeToo movement had gone "too far". But, critically, not because conservative America believed Blasey Ford was lying. It was much more that they didn't care if she was telling the truth. That's why they didn't bother to find out, either way. The grim reality is that, as a general rule, Republicans simply don't think it matters in many cases if a man has a history of sexual abuse. This wasn't a "we don't believe he did it" situation. This was a "who cares if he did it?" situation.

The Potemkin investigation of Kavanaugh's background illustrates this ugly reality. Republicans believed it was politically important to look like they care about sexual assault, so they made a big show of "investigating" it. But they do not actually care about sexual assault and have nothing but contempt for people who do care about the issue. And so it was about propping up an illusion of concern, while not actually doing anything substantive at all.

No surprise, of course. These are the same folks who backed Trump — and not just in 2016 and 2020, either. They are gearing up to put him on the ballot again in 2024. As a reminder, this is a man has not only been accused of sexual assault and abuse by 26 women, but two — his first wife Ivana Trump and journalist E. Jean Carroll — of them told harrowing stories of rape. (Ivana Trump later recanted the word "rape" during the nasty, lawyer-heavy divorce.)

Even for those who refuse to believe women, no matter how many steps forward, the case against Trump is about as ironclad as it gets, due to the completely voluntary taped confession he made to Billy Bush on the set of "Access Hollywood" in 2005. You know the one, of course, where he brags about how he likes to "grab 'em by the pussy" and that, "When you're a star, they let you do it."

The fact of Trump's history of sexual assault isn't really up for debate, but his support has only grown among Republicans in the five years since the "Access Hollywood" tape came out. Most of them don't even pretend to believe it's all a frame job, because again, taped confession/bragging session. They simply don't care. Being a sexual predator does not disqualify men from having positions of incredible political power, in Republican eyes. And the fact that Trump bragged about it is a reminder that some men even see assaulting women as something to be proud of.

The idea that Kavanaugh is the victim of overzealous feminists and opportunist Democrats has less to do with a belief that he's innocent and more about a belief that it shouldn't matter if men do things like this. It's all tied up with the ongoing outrage on the right about "cancel culture" and "wokeness." The anger flows from a conservative sense of entitlement to do and say awful things without having to face any consequences for it. You see a similar dynamic in the fights over what the right falsely describes as "critical race theory." Few deny that the U.S. has a history of slavery, segregation, or lynching. Conservatives just want liberals to quit talking about it, because, ultimately, they don't see why it should matter. And, in fact, they're annoyed that "woke" people keep insisting that these things do matter.

On a similar front, conservative commentator Bill O'Reilly is waging a war to silence Andrea Mackris, who accused him of sexual harassment when they were both working at Fox News and settled out of court in 2004. No one mistakes this as a situation of an innocent man trying to clear his name. This is just one of at least five sexual harassment lawsuits that Fox News settled on O'Reilly's behalf. And legal documents have lengthy transcripts from conversations Mackris apparently taped with O'Reilly.

This fight isn't about the facts. Letting women go on TV to tell their stories of being victimized is signaling that women matter and that sexual abuse is serious, and that, above all other things, is what people like O'Reilly cannot countenance.

It's good that Whitehouse and his fellow Democrats have stayed on this scandal, even as most D.C. power players have moved on. The #MeToo movement was, indeed, a seismic shift in how our country talks about sexual abuse, and a lot of people really did wake up to the fact that it's much more common than they thought. But it's important to remember that, for all that progress, we still have a sizeable number of Americans who flat out do not think most sexual abuse is a serious issue and resent people who say otherwise. Changing that attitude is going to require a lot more than education about the facts.