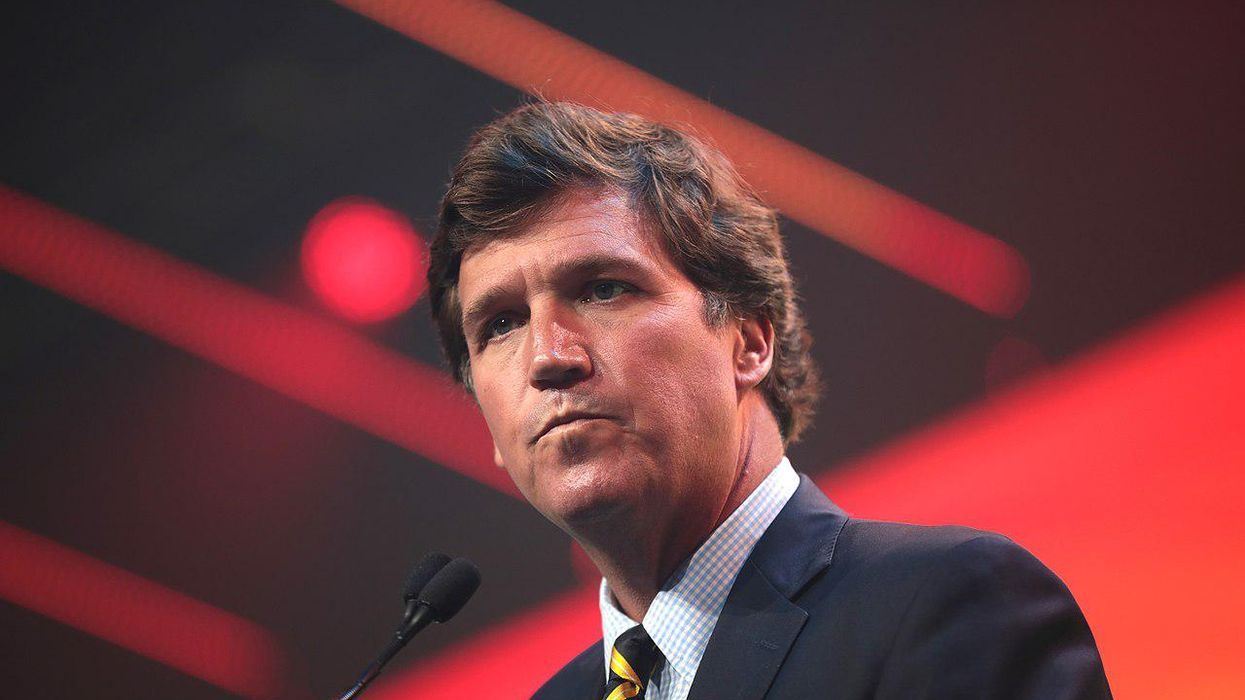 Fox News, especially Tucker Carlson and Laura Ingraham, has been full of bogus anti-vaxxer claims at a time when COVID-19's delta variant is infecting countless unvaccinated people in red states. Journalist Justin Baragona, this week in an article published by the Daily Beast, argues that vaccine makers themselves are helping to finance those anti-vaxxer claims by being major advertisers on Fox News.

Baragona explains, "With increasing regularity over the past few months, Fox News has peddled vaccine skepticism — and at times, outright resistance — to its millions of viewers, leading critics to accuse the network of 'killing people' as large swaths of conservatives refuse to get vaccinated. And it turns out that such dangerous rhetoric has, in effect, been sponsored by the pharmaceutical giants involved in developing, manufacturing and distributing the very vaccines that Fox News hosts and pundits have railed against on a near-daily basis."

Citing data from Media Matters, Baragona notes that "some of Fox's top advertisers include Johnson & Johnson, GlaxoSmithKline and Novartis AG."

"Other top vaccine manufacturers, like Pfizer and AstraZeneca, have run hundreds of commercials on the network since the start of the year and rank among the cable network's top 150 sponsors," Baragona observes. "Most of the commercials were not for the drugmakers' vaccines, but rather, direct-to-consumer advertisements for their prescription or over-the-counter medications. Johnson & Johnson, which has administered nearly 13 million doses of its one-shot COVID-19 vaccine in the United States, is currently one of Fox News' top advertisers, ranking in the top 15 to date."

Baragona adds that as of July 16, Johnson & Johnson had "run 1579 commercials during Fox News programming."

To be sure, pharmaceutical companies do a lot of advertising on cable news — and not only Fox News and Fox Business. CNN and liberal-leaning MSNBC are full of pharma ads.

It's no coincidence that pharma companies do so much advertising on Fox News, Fox Business, CNN (both English-language CNN and the Spanish-language CNN en Español) and MSNBC. The cable news audience, on the whole, leans older, and someone who is 50 or older is more likely to need a drug for high blood pressure or Type 2 diabetes. And pharma companies will gladly sell their products to liberals who watch Rachel Maddow and Joy Reid on MSNBC as well as Republicans who watch Sean Hannity and Laura Ingraham on Fox News.

In the U.S., three COVID-19 vaccines have been approved and distributed: Moderna, Pfizer and Johnson & Johnson. This journalist received both doses of the Moderna vaccine earlier this year and experienced no side effects.

On Fox News, Carlson has claimed that President Joe Biden and his allies want to punish Americans who don't get vaccinated for COVID-19 — which of course, is not something Biden has advocated. Biden has never said that anyone who doesn't get a COVID-19 vaccine deserves to be punished, although he has repeatedly stressed that the more Americans are vaccinated, the sooner the U.S. will be able to achieve some type of herd immunity and start to get back to normal.

"Two of the network's most influential and widely viewed stars, Tucker Carlson and Laura Ingraham, have been at the forefront of Fox News' anti-vaccine coverage for months," Baragona notes. "The pair and their guests have openly said that the vaccines are dangerous, questioned whether they work at all, and justified Americans' refusal to get their shots."

Baragona points out, however, that according to reporting on FiveThirty Eight, Fox News viewers are more likely to be vaccinated than viewers of One America News or Newsmax TV — both of which pride themselves on being to the right of Fox News and Fox Business. Nonetheless, Newsmax CEO Christopher Ruddy recently wrote an op-ed that surprisingly, praised Biden for his COVID-19 vaccination program and hailed the vaccines as saving lives.