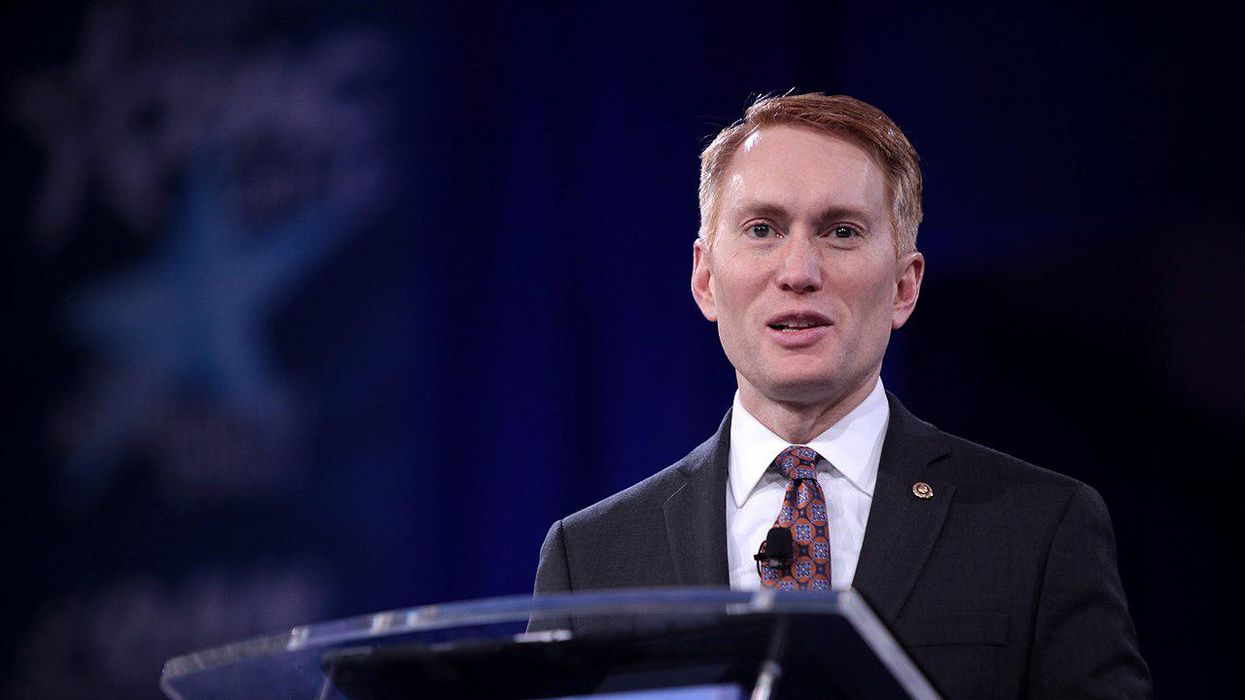 Anyone who doubts that the Republican Party has become a cult devoted to worshipping former President Donald Trump need only look at recent events surrounding ultra-conservative Sen. James Lankford. Although the right-wing Oklahoma Republican has a very pro-Trump history and has promoted the Big Lie, he is facing a very aggressive primary challenge from wingnut Trump worshipper Jackson Lahmeyer — who has been endorsed by John Bennett, the new chairman of the Oklahoma Republican Party. And as Lahmeyer and Bennett see it, Lankford's cardinal sin is not promoting the Big Lie enough.

The 53-year-old Lankford, reporter Sam Brodey explains in an article published by the Daily Beast on July 7, originally planned to vote against certifying now-President Joe Biden's Electoral College victory on January 6. Sen. Josh Hawley of Missouri and Sen. Ted Cruz of Texas were shamelessly promoting the Big Lie — the false and totally debunked claim that Trump was the victim of widespread voter fraud in the 2020 election — and Lankford, in sheep-like fashion, went along with it. But that was before a violent mob of insurrectionist Trump supporters stormed the U.S. Capitol Building. Lankford reversed his position, ultimately voting to certify Biden's Electoral College victory over Trump. And because of that vote, Lahmeyer argues, Lankford does not deserve to be reelected to the U.S. Senate.

Lankford has noted that Bennett's decision to endorse Lahmeyer is the type of thing that rarely occurs in U.S. politics — state party chairs seldom endorse 29-year-old primary challengers. The 29-year-old Lahmeyer (a pastor at the fundamentalist Sheridan Church in Tulsa) told the Beast, "It may be unheard of, but there's a reason the state of Oklahoma is adamantly against James Lankford…. He embarrassed our state. He caved like a coward."

Lankford, following January 6, voted "not guilty" in Trump's second impeachment trial — and he recently joined Senate Minority Leader Mitch McConnell in opposing a commission to investigate the January 6 insurrection. The Oklahoma senator has hardly been as outspoken against Trump as Sen. Mitt Romney of Utah or Rep. Liz Cheney of Wyoming. Regardless, Lahmeyer's message is clear: Lankford failed to adequately worship Dear Leader and must pay a price for it politically.

Lahmeyer is hardly a major name in politics, but as Brodey points out, the pastor from Tulsa "meets the most important qualification for political service in today's Republican Party: fealty to Donald Trump."

Brodey explains, "Lahmeyer also believes Trump should be reinstated as president, wants every state subjected to a full 2020 election audit, and thinks the FBI and 'Antifa' pushed into the U.S. Capitol on January 6. His primary campaign against Sen. James Lankford (R-OK) has been blessed by a pair of powerful figures from the MAGA fringe — former Trump advisor Michael Flynn and conspiracy-peddling lawyer Lin Wood —and, as of last weekend, the new chairman of the Oklahoma Republican Party, John Bennett, a former legislator who once notably called for Hillary Clinton's execution by firing squad."

But former Oklahoma Gov. Frank Keating, a Republican, doesn't believe that Lankford will lose to Lahmeyer in Oklahoma's 2022 U.S. Senate primary. Keating told the Beast, "James is admired and respected for his intellect and his character. Anytime you run for reelection, you have the opportunity to lose. But I don't see that at all happening to him."

If Lankford does prevail in the primary and makes it to the general election, he will most likely win another term — as Oklahoma is a deep red state. In 2020, Biden lost Texas to Trump by 6%; in Oklahoma, Biden lost by 33%.

"It may be a harbinger of what's to come," Turner argued. "Lankford isn't in trouble this cycle, but are these folks going to be an irritant? Absolutely."