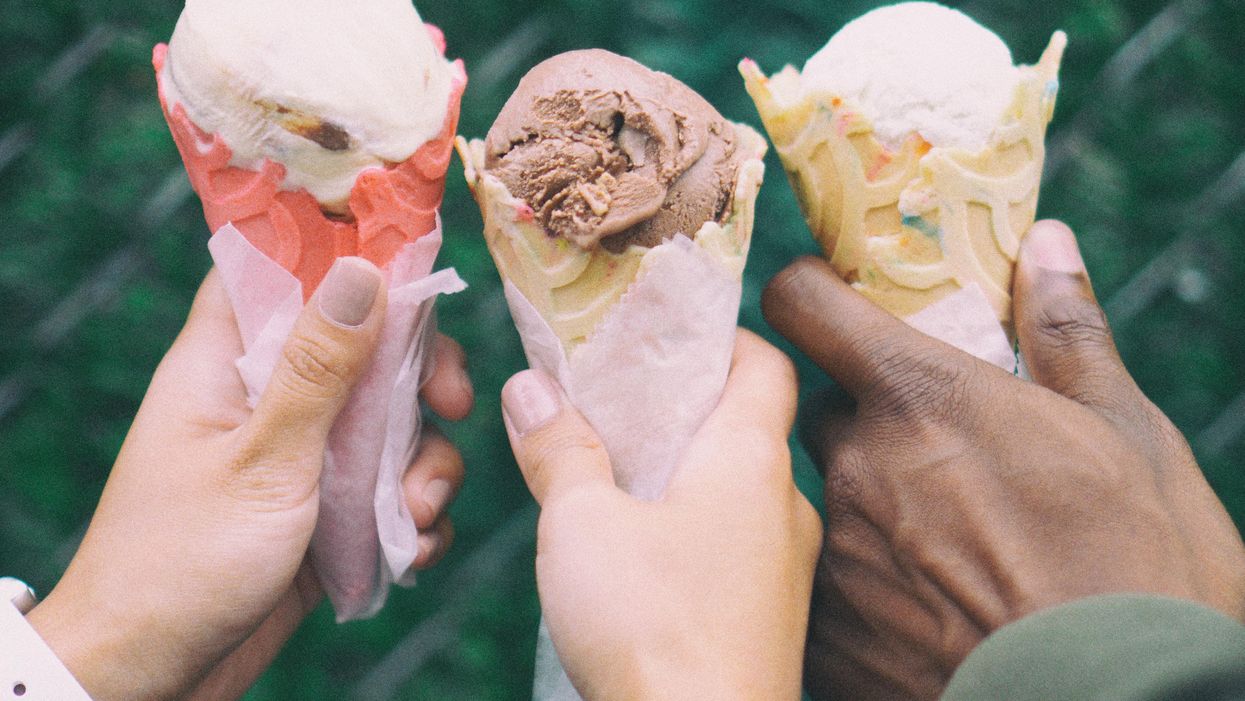 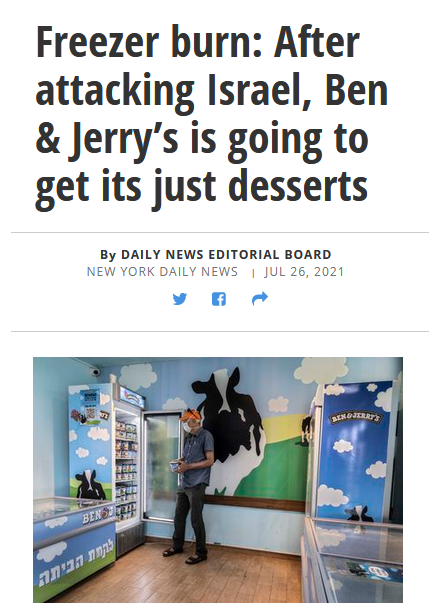 Daily News (7/26/21) on Ben & Jerry's withdrawal from the Occupied Territories: "Very pleased are the BDS crowd, Israel-haters and assorted antisemites, but it's an ice-cream headache for Unilever."

Ben & Jerry's decision to halt its operations in the Israeli-occupied West Bank and in Jerusalem has pro-Israel editors working overtime.

The New York Daily News (7/26/21) celebrated counter-boycotts of the ice cream brand, including the state's pension system considering cutting ties with the brand's parent company, Unilever, because of a 2016 executive order against the Boycott, Divestment and Sanctions movement. The tabloid's editorial board, sounding like a sidekick standing behind a gang enforcer, said, "No firm should want to be on that very naughty list."

The New York Post found a brand worker who quit over the West Bank pull out (7/22/21), and a grocery store that is taking the ice cream off its shelves (7/19/21). New York Gov. Andrew Cuomo made waves as the first US governor to take executive action against the BDS movement, but the Post (7/24/21) complained that he's not attacking Ben & Jerry's swiftly enough.

In the Wall Street Journal (7/21/21), Scalia Law School professor Eugene Kontorovich gloated that several state pension funds could retaliate against Unilever, because Israel considers parts of the areas Ben & Jerry's is boycotting to be its sovereign territory.

The Boston Herald (7/21/21) went a step further, denouncing Ben & Jerry's decision to boycott the occupation as a part of a longer list of unacceptably progressive causes adopted by the brand, like opposing the Trump administration and celebrating racial justice advocate Colin Kaepernick. "If Alexandria Ocasio-Cortez ran an ice cream company, this is what it would look like," the Herald fumed.

Who's got a double standard?

An op-ed in Newsweek (7/22/21), written by associates of the Foundation for Defense of Democracies, invoked a double standard in regards to human rights concerns, saying, "Unilever is reportedly a major purchaser of tomato paste from state-owned factories in China's Xinjiang region, where the US State Department says China is engaged in 'horrific abuses.'"

Newsweek's supposed "gotcha" provides insight into the imbalance we're seeing in the press. China, like Israel, retaliates against brands that participate in boycotts against it—H&M, Nike and other brands were targeted for declining to buy cotton from Xinjiang (BBC, 3/26/21)—but the response from the US press is very different. Fortune (7/26/21) runs advice on "How US CEOs Can Stand Up to China," not calls for states to join China in punishing those CEOs.

While Israel's retaliation against Ben & Jerry's is framed as defending its sovereignty, the China situation is framed in Cold War language: The "latest China-versus-the-West dispute is getting ugly," because the Chinese state was offering "threat[s] to the likes of Adidas and Nike" (Deutsche Welle, 4/9/21).

What's striking about the editorial reaction to the Ben & Jerry's news isn't that it supports Israel, but that it insinuates that the tactic of boycotting Israel is extreme and illegitimate when, in fact, boycotts have long been considered one of the most effective nonviolent ways people and groups can have political agency beyond the ballot box.

LGBTQ activists famously led a boycott of Russian products because of the Russian government's treatment of sexual minorities (Guardian, 7/26/13). Civil rights activists in the state of Georgia threatened boycotts of the state's biggest companies unless they opposed that state's voter suppression moves (CBS, 3/29/21). Cuomo even barred state workers from nonessential travel to states that passed anti-LGBTQ laws (Vanity Fair, 3/29/16). When Hugo Chávez was still alive and leading the socialist government of Venezuela, anti-socialists called for a boycott of the Venezuela-owned oil giant Citgo (Pittsburgh Post-Gazette, 10/21/06).

The idea that Israel is being "singled out," as opponents of BDS often say, just doesn't stand up to scrutiny. The Delano grape boycott and the Montgomery bus boycott are celebrated in American history as examples of how nonviolent action has been used to address injustice. And the press has repeatedly called for a "Palestinian Gandhi" to emerge who can bring the movement for Palestinian rights away from suicide bombs and rocket attacks (FAIR.org, 4/7/10, 4/1/11, 7/18/12; Bloomberg, 12/27/21).

The move by Ben & Jerry's is part of that movement to use nonviolent measures to pressure the Israeli government to recognize democratic rights. To dub boycotts of the occupation as antisemitic (as some Jewish organizations have) or, in the case of Ben & Jerry's, terroristic (according to the Israeli government—New York Post, 7/21/21) shows that calls for Palestinians to protest nonviolently (FAIR.org, 3/29/19) were never made in good faith. 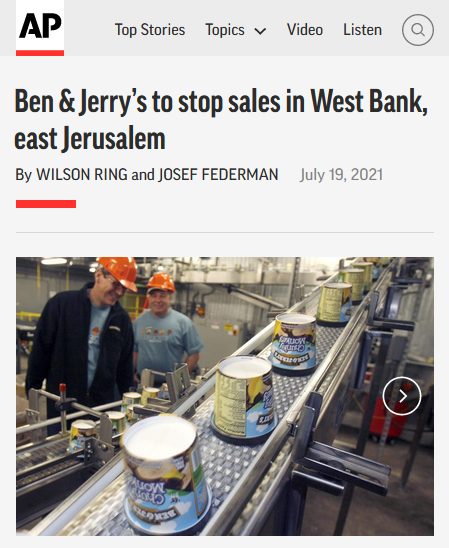 AP (7/19/21) was unusual in quoting a Palestinian perspective on Ben & Jerry's decision—that it was "an important step to help pressure the Israeli government to end the occupation."

Palestinian voices in mainstream US media reporting on Ben & Jerry's have been largely absent. Background on efforts from Vermont activists have received scant attention. There's been coverage of aggressive quotes from Israeli officials, particularly [Prime Minister Naftali] Bennett and [Foreign Minister Yair] Lapid, but very little on what BDS actually is…. Additionally, I would like to see more legal analysis with journalists reaching out to Palestine Legal to find out about the efforts to suppress First Amendment-protected speech on Palestinian rights.

As Brown pointed out, the initial coverage of the issue in the New York Times (7/19/21) didn't feature Palestinian voices or the greater perspective of BDS activists. Coverage at NPR (7/19/21), while featuring the company's reasoning for pulling out of the West Bank, similarly doesn't augment the news with voices from Palestinians or the BDS movement. AP (7/19/21), by contrast, offered a statement from an Arab Joint List lawmaker in Israel and from Palestine activists.

End of a taboo?

Israeli government supporters in the press fear that if Ben & Jerry's and its parent company don't suffer economically for their decision on the Occupied Territories, then support for this kind of political pressure will become less taboo, and other groups could follow suit. And those editorialists have reason to worry. Democratic voters are becoming more sympathetic to supporting Palestinians, an AP poll (6/23/21) suggests, while another poll indicates that a quarter of US Jews are willing to call Israel an "apartheid" state (Jewish Telegraphic Agency, 7/13/21).

Given that Ben & Jerry's choice could be a sign of a shifting narrative, perhaps it's not so surprising that editors are having a meltdown over ice cream.

FAIR's work is sustained by our generous contributors, who allow us to remain independent. Donate today to be a part of this important mission.