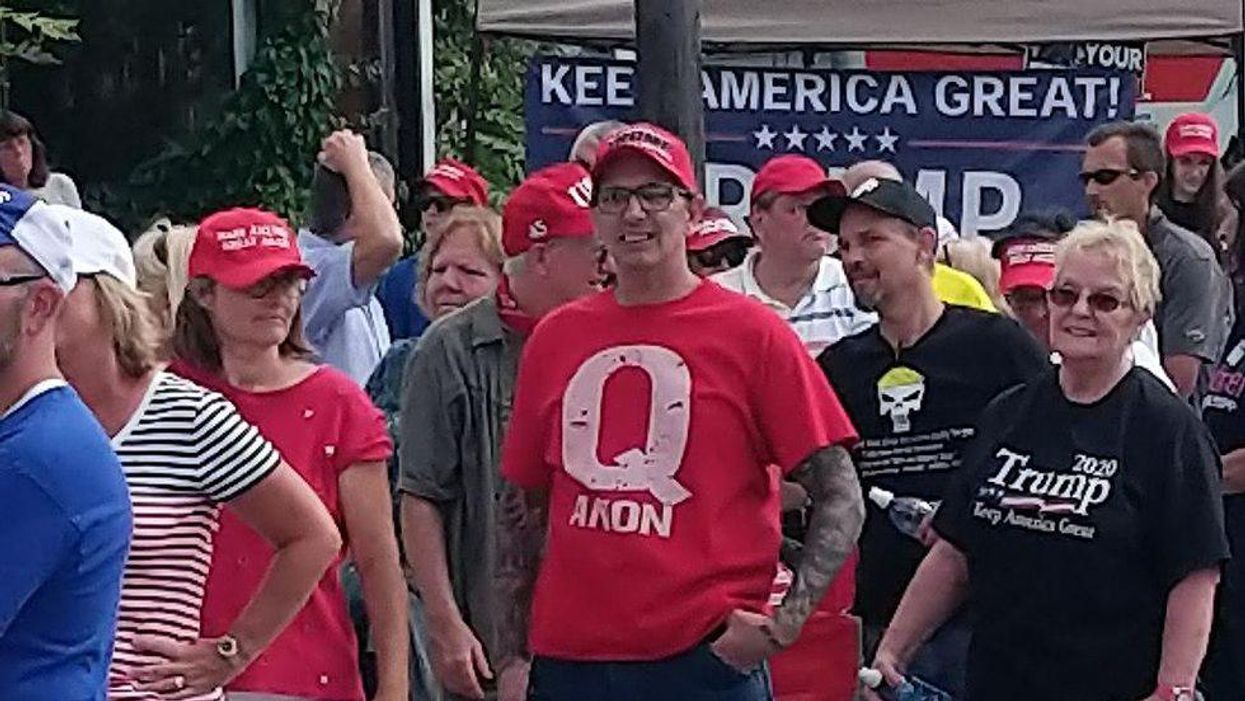 A QAnon supporter, wearing a red shirt, at a pro-Trump event in New Hampshire in August 2019, Marc Nozell
Aldous Pennyfarthing
and
DailyKos
June 21, 2021

Seeing QAnon adherents puzzle their way through reality is a bit like watching Donald Trump try to sound out a raw vegan menu. Eventually he orders the portobello mushroom steak—and then we sit back and wait to see his face contort into ever-lower depths of bafflement as he deluges his entree with enough ketchup to drown a baby rhino. And that's before the German carob cake shows up.

At some point, the Q folks all changed their internal default font to Zapf Dingbats, and now literally nothing they say makes any sense to anyone—except their fellow travelers.

The latest? They can't imagine why Donald Trump is promoting a December tour with Bill O'Reilly when he's supposed to be back in the White House in August and O'Reilly is presumably scheduled for a series of painful face-splotchectomies.

QAnon supporters have acted with dismay and confusion after Donald Trump announced the December dates of his upcoming speaking tour with Bill O'Reilly, which coincides with when he is meant to have already been reinstated as president.
…
The announcement was shared by a number of popular QAnon telegram accounts, one of which has nearly 75,000 subscribers on the encrypted messaging service app.
Supporters of the radical movement expressed concerns that Trump going on a speaking tour later this year surely means that he will not be returning as president—a false claim they have continued to believe since he lost the 2020 election more than seven months ago.

I really wonder what these people will do when Sept. 1 comes around and Trump is still ensconced, Taft-like, in his toilet. How many times can they move the goalposts before they—like the QAnon people themselves—are on another planet?

According to the announcement, Trump and O'Reilly have several December dates scheduled in Florida and Texas. But if Trump really thinks he'll be back by then—which has been widely reported to be the case—then why is he fixin' to go on tour with Pile O'Bile-y?

Of course, many QAnoners and other Trumpy dead-enders are hanging their hopes on either Pillow Man Mike Lindell's barmy assurances or the Arizona fraudit, which they believe will touch off a domino effect wherein one blue state after another falls back into Donald Trump's column. Because there's zero chance that the most vulgar, deceitful man on the planet—a man who never polled over 50% percent approval at any time during his presidency—could have possibly lost a national election.

Of course, some QAnoners appeared to be hedging their bets: "It's only a few dates close together...it could be done if it works out like it should...could cancel....but yup..kinda a gut punch statement," one wrote. "But we are in an information war, so who the hell knows."

Who the hell knows? Not you, that's for sure. But most of us do, oddly enough—because we're not getting our information from rando kookaburras on Telegram.

And, yes, it's possible that Trump will cancel his serial sexual harasser tour with O'Reilly, but not because he'll be president. It'll be because his muscles have taken on the texture of Gerber's mashed pears and he can't get through the auditorium doors without a crowbar and a can of Crisco.

Or maybe—just maybe—he'll be defending himself in court. A man can dream, right?