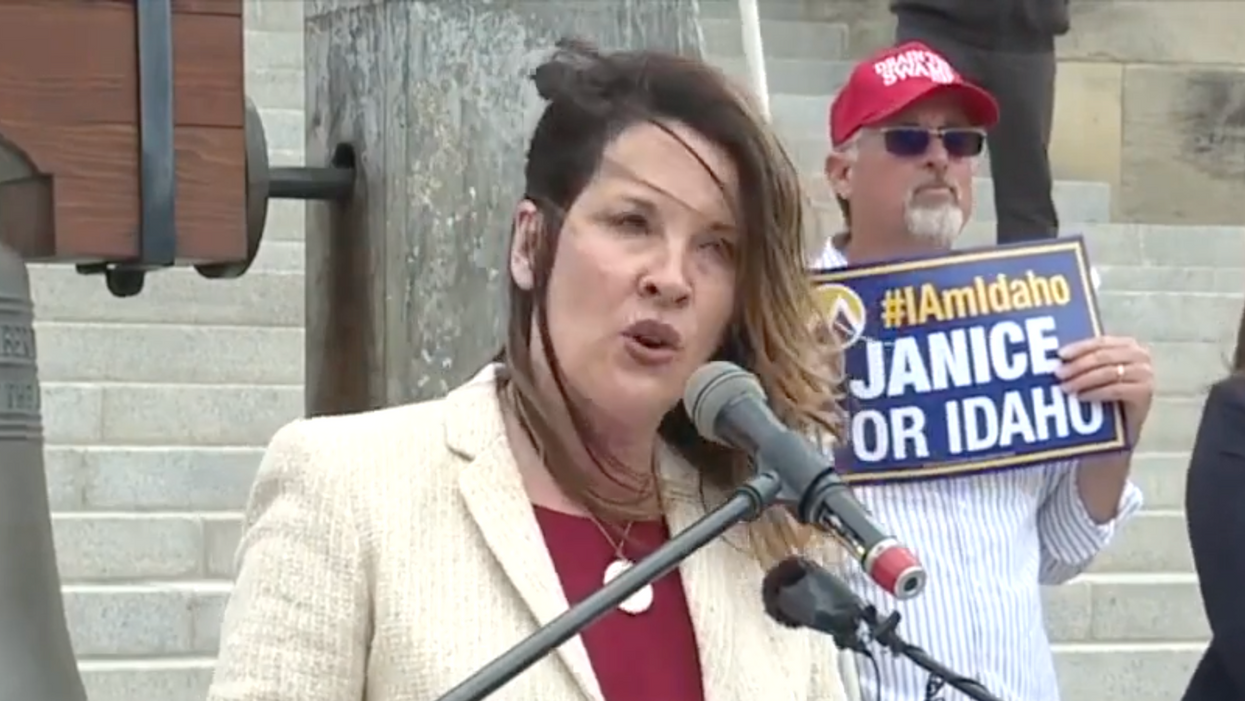 In Idaho, Republican Lt. Gov. Janice McGeachin — who is seeking the state's GOP gubernatorial nomination for 2022 — has generated considerable controversy because of her ties to extremist far-right militia members. The Guardian has obtained a copy of a video that, according to reporter Jason Wilson, shows militia extremist Eric Parker giving McGeachin's gubernatorial campaign an enthusiastic endorsement at a recent event.

In the video, Wilson reports, Parker can be seen "reminding" the 58-year-old McGeachin that she previously told him, "If I get in, you're going to have a friend in the governor's office." Parker is the leader of a militia known as the Real 3% of Idaho.

Parker became well-known in the militia movement in April 2014, when he was seen pointing a rifle at federal agents during the infamous standoff at the Bundy Ranch in Bunkerville, Nevada. Although he was facing federal criminal charges, Parker avoided the possibility of spending decades in federal prison by agreeing to plead guilty to a single misdemeanor charge. Parker came to be known as the "Bundy Ranch Sniper," which is considered a badge of honor in the far-right militia movement.

Wilson reports that in the video showing Parker endorsing McGeachin at an event in Idaho, Parker "tells the small audience that when he sought McGeachin's assistance in the case of Todd Engel — another Bundy Ranch attendee who was sentenced to 14 years in prison in 2019 — he showed her sealed evidence from the trial."

According to Wilson, the video shows Parker saying that McGeachin "started writing letters to the Department of Justice" on his behalf when he was incarcerated and was "rallying support" for him. And Parker says of McGeachin, "We need to do everything we can to get her where she can do the most good for us…. We got to get her in there for us."

Wilson explains, "Parker posted the speech video on his Telegram channel on 19 May, the same day that McGeachin publicly announced her candidacy for governor, where she may be up against the incumbent, fellow Republican Brad Little, who is yet to clarify his intentions."

Little was elected governor of Idaho in 2018, which was also the year in which McGeachin was elected lieutenant governor. Before her 2018 campaign, McGeachin had spent a decade serving in the Idaho House of Representatives.

Lindsay Schubiner, program director at the Western States Center, told The Guardian that it is "deeply disturbing" that a high-level figure in Idaho's state government has a "cozy relationship" with Parker. The Western States Center monitors extremist groups in the western United States, and Schubiner warned that McGeachin "has consistently sought the support and backing of extreme, anti-democratic movements in Idaho."

"No public official has any business advancing the agenda of an anti-democratic paramilitary group," Schubiner told The Guardian.