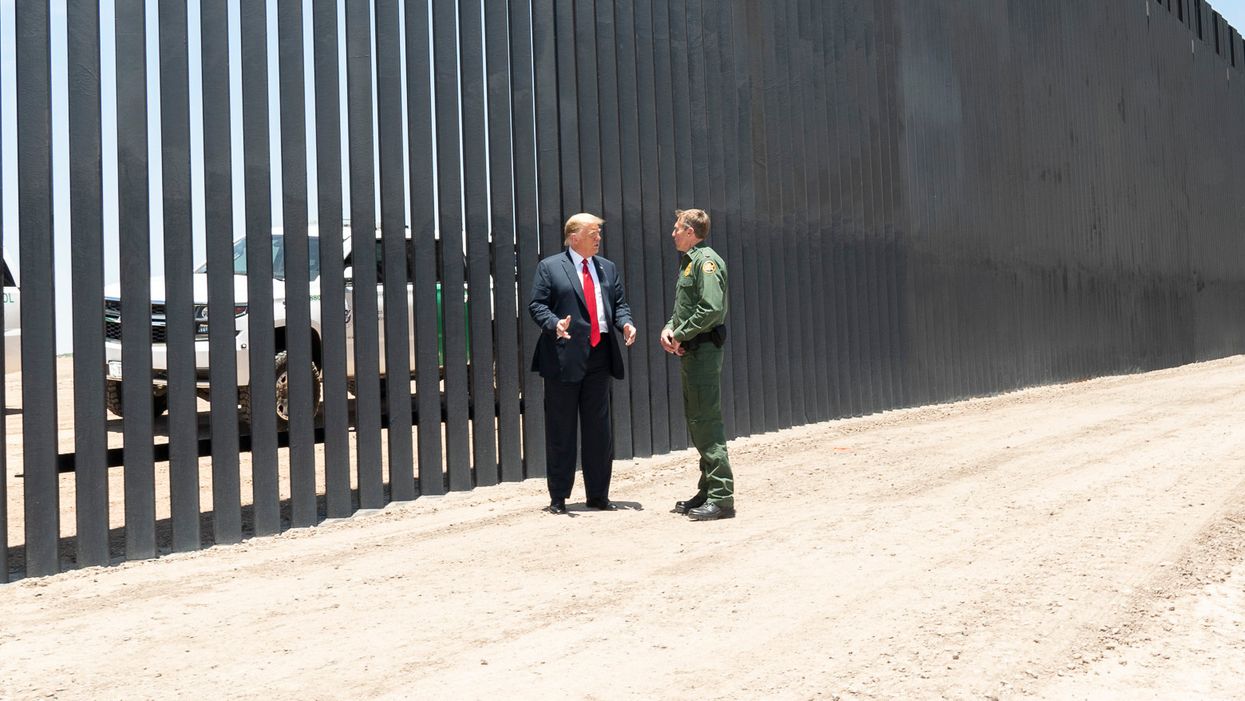 The Biden administration has announced that it will return more than $2 billion in funds swindled by the previous administration for its stupid border wall that Mexico was supposed to pay for. In a statement Friday, the White House said "[b]uilding a massive wall that spans the entire southern border and costs American taxpayers billions of dollars is not a serious policy solution or responsible use of Federal funds."

The administration said funds will be restored to dozens of projects both in the U.S. and around the world, including the Spangdahlem Elementary School in Germany. "The school, which currently supports over 600 military children, lacks proper air conditioning, plumbing, and security systems and was due for replacement when the prior administration diverted funds to the wall," the White House said.

President Biden had on Day One ordered a pause to wall construction while his administration reviewed the project, an order that some builders appeared to violate. In footage shot by Tucson Samaritans in February, bulldozers and an excavator could be seen tearing into the Pajarito Mountains in Arizona. "They're leveling mountains & destroying jaguar habitat in an apparent violation of Biden's order to halt construction," borderlands campaigner Laiken Jordahl tweeted. "@POTUS must investigate & stop this madness for good. Footage shot by Tucson Samaritans."

CNN reports that in testimony to Congress last week, U.S. Army Corps of Engineers officials said it was in the process of cancelling nearly two dozen border wall contracts. "We have 20 contracts that we've terminated for the government's convenience," CNN reports Lt. Gen. Scott Spellmon told members of the Senate Appropriations Energy and Water Development subcommittee. "And we're in negotiations now with each of those 20 vendors to work through what those final bills will be."

The White House also said it would be using appropriated funds "to address urgent life, safety, and environmental issues" stemming from wall construction. "For instance, DHS has already started work to repair the Rio Grande Valley flood protection system that the prior administration compromised, and to remediate dangerous soil erosion due to improper soil compaction along a 14-mile wall segment in San Diego, California," the administration said.

Environmental justice organizations that have called on the administration to address environmental and wildlife issues stemming from construction (as well as called on the president to remove certain border fencing) applauded the decision. "This is a welcome, sensible next step to begin healing the devastation that Trump inflicted on the borderlands," Center for Biological Diversity Senior Policy Land Specialist Paulo Lopes told the Associated Press (AP). Nearly 70 tribal groups and environmental and civil rights organizations in February called on the Biden administration to tear down nearly 60 miles of fencing in Arizona.

But as that report also notes, "[t]he administration doesn't explicitly say it won't build any new wall." The White House in its statement called on Congress to cancel remaining funds it had previously appropriated for barrier construction. "Although most of the funds used for the border wall were diverted from other purposes, Congress provided DHS with some funding for border barrier projects. DHS is legally required to use the funds consistent with their appropriated purpose," the White House said.

"President Biden can permanently suspend all wall construction and order the Department of Justice to dismiss all lawsuits, return lands taken under the lawsuits, as well as cancel all contracts," the group said in Rio Grande Guardian at the time. "This is the first step to rebuild the border communities, including the Rio Grande Valley, that have been destroyed under Trump and so many other administrations."