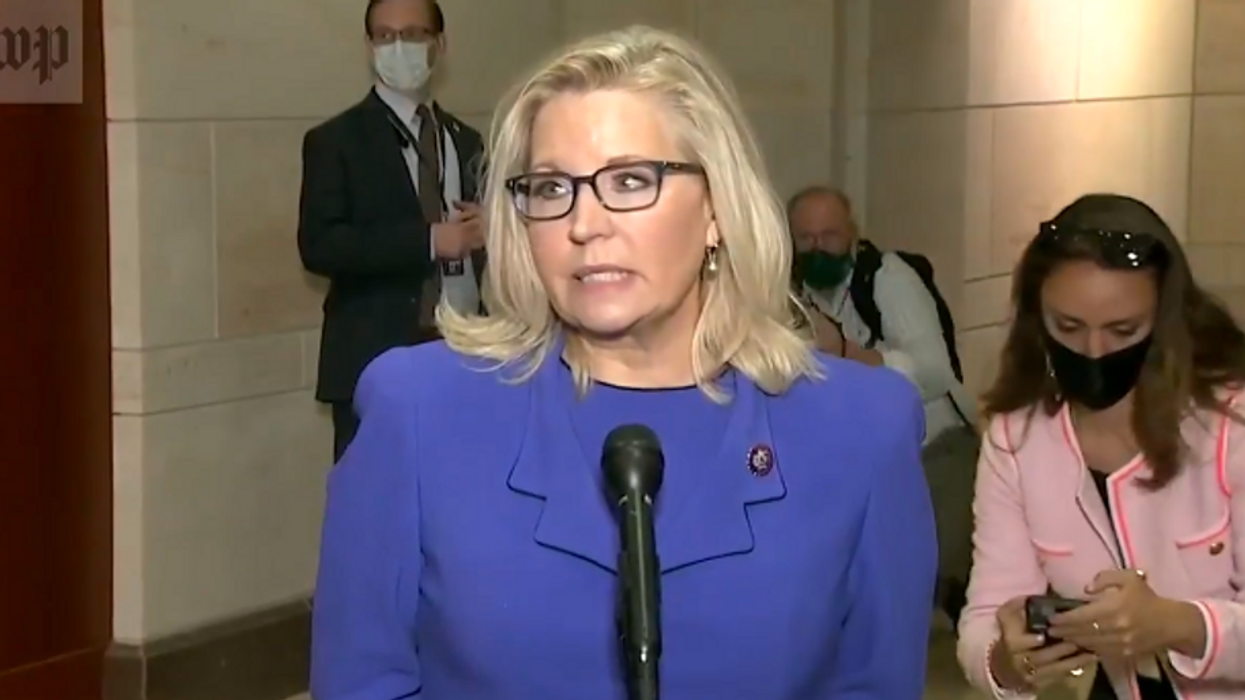 Rep. Liz Cheney, Image via Screengrab.
Cheney after ouster: 'I will do everything I can to ensure' Trump 'never again gets anywhere near the Oval Office’
Meaghan Ellis
May 14, 2021

In the Trump era, the Republican Party underwent numerous changes that have shifted its ideologies and belief systems. Gone are the days when Republican lawmakers trained their focus on decreasing federal spending while placing an emphasis on traditional, conservative policy. Now, it appears former President Donald Trump's demands are being prioritized over the party's overall goals.

Rep. Liz Cheney (R-Wyo.) is a prime example of that, according to an editorial published by Flux. However, Republicans' current belief systems signal that she likely will not be the last casualty of this political war. Flux editor Matthew Sheffield highlights the rise of Republican lawmakers' fears of their own support base.

While Trump and right-wing media's dangerous rhetoric have contributed to the uptick in right-wing extremism, Sheffield also attributes the enhancement of these belief systems to the "long-term epistemic collapse of Christian fundamentalism."

"That Republicans would move to subvert democracy so soon after being attacked by violent seditionists set upon them by Trump himself is the product of GOP elites' fears of their own voters who have become increasingly extremist as they've been subjected to noxious news and infotainment for decades," Sheffield wrote. "But while right-wing media has been the means by which American conservatives have become reactionaries, the long-term epistemic collapse of Christian fundamentalism that has been in motion for decades is the reason that it happened, and why the mass violence of Jan. 6 is more likely to be a harbinger than a singularity."

Sheffield also noted that Cheney's ousting also underscores the war against truth. After losing the presidential election to President Joe Biden, Trump intensified his war on fact and truth often lambasting members of the media, Republican leaders, lawmakers, and any others who did not support his unfounded claims of election fraud.

The domino effect of Trump's actions has also "tapped into a new fundamentalist strain of thought which had been propagating the idea for years that nothing can truly be known about the world," Sheffield wrote.

He referenced the words of Charles Kesler, editor of the conservative Claremont Review of Books, who delivered a targeted synopsis of the Trump supporter mentality in a piece he'd written for his own publication. At the time, Kesler continued to blindly support the former president's disturbing, unfounded claims: "claims are 'baseless' only until such time as a base of evidence appears for them," he wrote.

For decades, the same ideology gradually making its way into the political space has been seen in the history books. Truth has often been denied while myths about the past have been pushed to the forefront.

"Though somewhat new to the political realm, such disingenuous assertions have become increasingly common among the few beleaguered academics stuck with the impossible task of defending literalist claims about scripture," Sheffield wrote. "Leaning heavily on secular deconstructionist writers, fundamentalists of every stripe have begun taking refuge in the idea that the reason their books' factual claims rarely pan out is that true history is the real myth and that the ancient past is so shrouded in the mists of time that it is essentially inscrutable."

With the war on truth, Cheney's ousting comes as no surprise and it signals a shift in the Republican Party's handling of those who push back against impropriety. As Republicans continue to do Trump's bidding, the only question that remains is: "Who's next?"