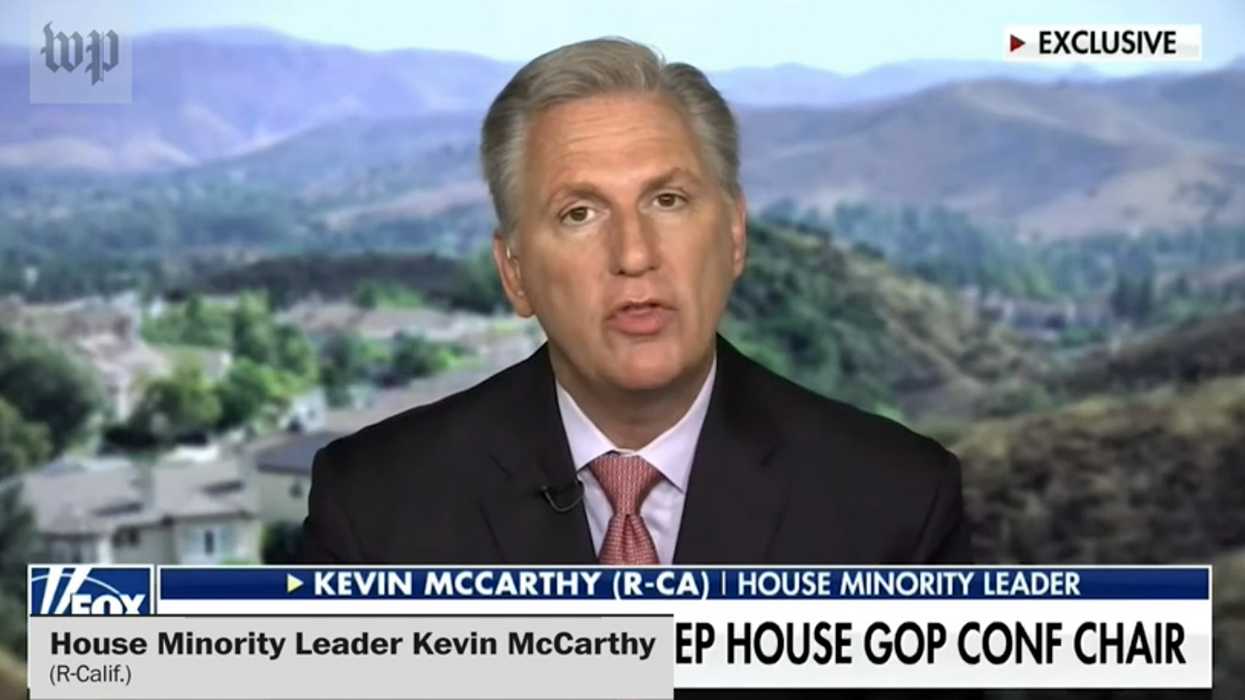 House Minority Leader Kevin McCarthy (R-Calif.) is facing a fierce fact-check from journalists after making another revisionist claim about his party's response to the 2020 election.

On Wednesday, May 12, McCarthy spoke to reporters after attending a meeting with President Joe Biden. While speaking to reporters, the California lawmaker said, "I don't think anybody is questioning the legitimacy of the presidential election. I think that is all over with. We're sitting here with the president today."

The perplexing comment quickly caught the attention of reporters who jumped at the opportunity to fact-check McCarthy for his inaccurate claims. On May 7, former President Donald Trump called the election the "Fraudulent Presidential Election of 2020" in a message to his supporters.

Now, McCarthy is facing a Twitter storm from reporters.

HuffPost Politics reporter Jennifer Bendery tweeted, "Kevin McCarthy was one of the 147 Republicans who voted to overturn the presidential election based on lies about election fraud -- just hours after a deadly Capitol insurrection fueled by those same lies."

Kevin McCarthy was one of the 147 Republicans who voted to overturn the presidential election based on lies about e… https://t.co/WBJN1t698o
— Jennifer Bendery (@Jennifer Bendery) 1620839951.0

Lest we forget: Kevin McCarthy in the days after the election, on Fox News: “President Trump won this election. Ev… https://t.co/MSSApw74S8
— Jennifer Bendery (@Jennifer Bendery) 1620840461.0

Kevin McCarthy lied about the Big Lie. Does he understand how recorded audio and video work?
— Chris Hahn (@Chris Hahn) 1620839993.0

Dispatch editor and Fox News contributor Stephen Hayes even highlighted former President Donald Trump's remarks made on Monday, May 10. At the time, Trump again made claims of massive voter fraud as he urged Republicans to "unify" and not allow election fraud again.

"The number of votes is MASSIVE and determinative," the Twitter user said. This will prove true in numerous other States. All Republicans must UNIFY and not let this happen...The Fake News media refuses to cover the greatest Election Fraud in the history of our country."

Shameless. Trump, on Monday: "The number of votes is MASSIVE and determinative. This will prove true in numerous… https://t.co/bm8tLz0iLN
— Stephen Hayes (@Stephen Hayes) 1620838832.0

“I don’t think anyone is questioning the legitimacy of the president’s election. That is all over," says Minority L… https://t.co/eJq5nm3MF9
— Christina Wilkie (@Christina Wilkie) 1620838730.0