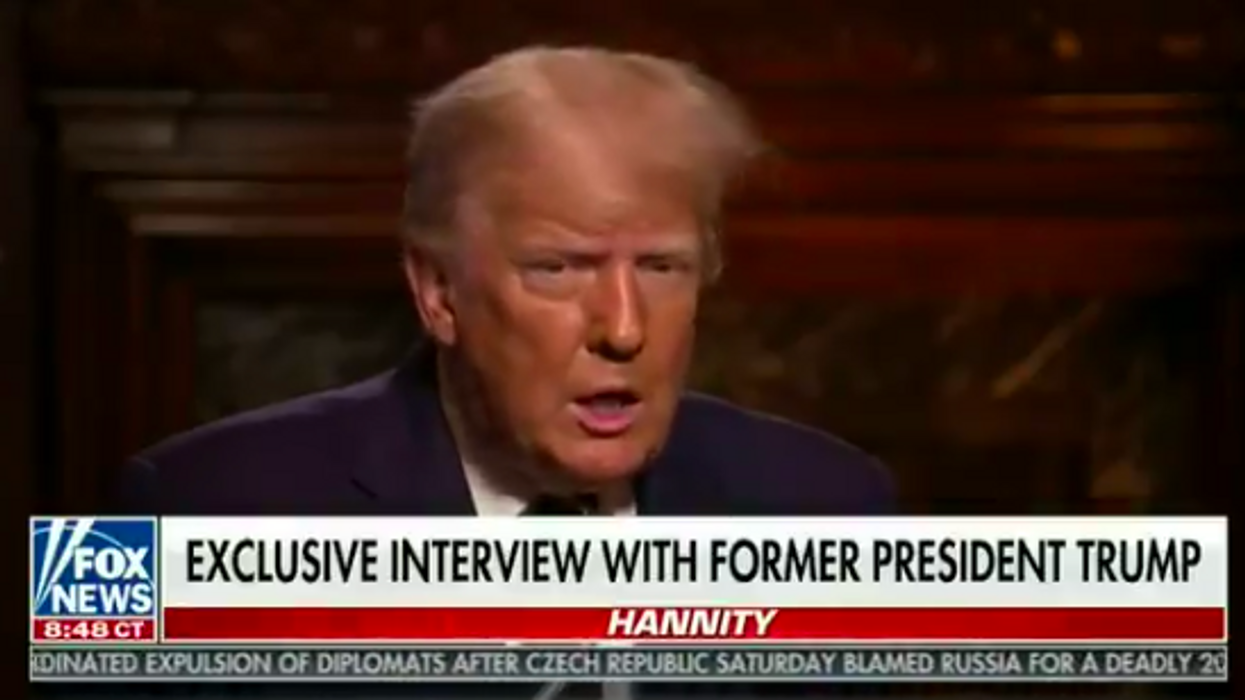 Former President Donald Trump joined Fox News host Sean Hannity on Monday night, to complain one more time about how tough he had it as the nation's commander in chief. Hannity's softball interview at the Mar-a-Lago compound featured a series of friendly questions about Trump's future and dedicated a fair bit of airtime to Trump's unsolicited opinions about Joe Biden's early days as president.

Hannity kicks off his interview with Trump with this hard-hitting question: "You are working as hard as you did wh… https://t.co/LrDp7lH2xR
— Justin Baragona (@Justin Baragona)1618881123.0

In one portion of the conversation, Hannity asked Trump what he missed most about being president, to which No. 45 in the parade of august leaders stretching back to George Washington and John Adams replied by complaining about how tough he had it leading the country.

"I miss the most, helping people ... that's why I did it. Look, this has been very traumatic," Trump responded. "I had a great life, great company, great business, no problems, and now all I do is, people go after you. It's vicious, it's horrible, but you know what? I loved doing it because I helped people. And I've helped them more than any president."

Trump says being president was "very traumatic" for him. This came in response to a question about whether he will… https://t.co/rR6NBZk8xt
— Jan Wolfe (@Jan Wolfe)1618883931.0

Hannity went on to ask Trump about a potential 2024 run for the White House, which, in true Trump fashion, received an indirect response. "Are you running again in 2024? What are the odds?" Hannity asked Trump.

Trump responded by teasing that possibility without saying yes or no, as he has often done since leaving office. "I got tremendous numbers," he said. "Nobody has ever gotten the numbers I got. No sitting president has come even close. There's more popularity now then there was the day before the election because they see how bad things are at the border. They see what's going on. They see that their guns are going to be gone, their Second Amendment. Their taxes are going up. Regulations are going through the roof. Jobs are going to go out."

Further, the former president attempted to make the case that Biden's policies aren't working for the American people while conceding that it will "take a little while to show" that the new president is a failure. Speaking about regulation, Trump declared — with no evidence whatever and amid signs of a strong economic recovery — that Biden's policies were hurting American jobs. "But if they add all these regulations back, the jobs are going to be gone. Your energy independence is going to be gone," Trump stated. "So I say this, I am looking at it very seriously, beyond seriously. From a legal standpoint, I don't want to really talk about it yet; it's a little too soon."