Severe weather this summer could cause another Texas power crisis

"Severe weather this summer could cause another Texas power crisis" was first published by The Texas Tribune, a nonprofit, nonpartisan media organization that informs Texans — and engages with them — about public policy, politics, government and statewide issues.

Electricity outages in Texas could occur again this summer — just a few months after the devastating winter storm that left millions of Texans without power for days — if the state experiences a severe heat wave or drought combined with high demand for power, according to recent assessments by the state's grid operator.

Experts and company executives are warning that the power grid that covers most of the state is at risk of another crisis this summer, when demand for electricity typically peaks as homes and businesses crank up air conditioning to ride out the Texas heat. Texas is likely to see a hotter and drier summer than normal this year, according to an April climate outlook from the National Oceanic and Atmospheric Administration, and 2021 is very likely to rank among the 10 warmest years on record globally.

“This summer, I am as worried right now [about the grid] as I was coming into this winter," said Curt Morgan, CEO of Vistra Corp., an Irving-based power company. “Sounds like I'm the boy that cries wolf, but I'm not. I've seen this stuff repeat itself. We can have the same event happen if we don't fix this."

As state lawmakers continue debating how to improve the grid after February's storm nearly caused its collapse, on Tuesday Texans were asked to conserve electricity because the supply of power could barely keep up with demand. A significant chunk of the grid's power plants were offline due to maintenance this week, some a result of damage from the winter storm.

The warning triggered a torrent of outrage from residents and political leaders across the state who questioned why the Electric Reliability Council of Texas, which manages the grid, allowed it to come so close to emergency conditions on a relatively mild spring day. “I appreciate the increased effort toward transparency, but wow this is nervewracking to see in April," state Rep. Erin Zwiener, D-Driftwood, tweeted Tuesday.

Heading into the summer, ERCOT included three extreme scenarios in a preliminary assessment of the state's power resources for the summer — the most extreme calculations ERCOT has ever considered for the seasonal assessment. Each scenario would leave the grid short a significant amount of power, which would trigger outages to residents:

Power grids must keep supply and demand in balance at all times. When Texas' grid falls below its safety margin of 2,300 megawatts in excess supply, the grid operator starts taking additional precautions, like what happened on Tuesday, to avoid blackouts.

Pete Warnken, ERCOT's manager of resource adequacy, told reporters near the end of March that the grid operator included the extreme scenarios to “broaden the debate on how to make the grid more resilient." Still, he said ERCOT expects sufficient power reserves, “assuming normal conditions" this summer.

While the extreme scenarios have a very low chance of actually occurring, an unlikely and severe event happened in February, when extreme cold knocked out several different sources of power at once just as the cold triggered surging demand for power and natural gas fuel shortages. More than 4.8 million customers lost power and at least 111 people died during the storm.

A final summer assessment will be published May 6.

“A catastrophic event like the winter storm could not be predicted several months in advance," Warnken said, adding that the preliminary report isn't intended to forecast unprecedented events.

Rather, Warnken said the scenarios should help inform state leaders and the public of what's possible — “the idea is the planners and stakeholders are aware that there's a possibility something like that could happen," he said. “These have a much lower probability of occurring than the traditional grid scenarios."

John Nielsen-Gammon, the Texas State Climatologist and director of the Texas Center for Climate Studies, said that this summer in Texas is shaping up to be hot and dry. While it's still early, he said temperatures this summer will depend on how much rain the state gets between now and June. Parts of the state — South Texas to far West Texas — have been in drought conditions for more than a year, he said.

“Temperatures during the summer depend a lot on how much rain there has been over the preceding several months," he said. “It's been fairly dry this past fall and winter and spring so far."

When heat waves hit large swaths of the state, that puts stress on the grid.

“In 2011, for example, most of the summer was a heat wave," Nielsen-Gammon said. That was the driest year on record in Texas, and what ERCOT based its extreme scenarios on this year. That summer, ERCOT took emergency precautions, but widespread outages did not occur.

“We were in an extreme drought with little moisture available [in 2011]," Nielsen-Gammon said. “Usually, if you have a heat wave, it's going to affect at least half the state if not most of it."

ERCOT is “carefully looking at" the potential for big heat waves and drought this year, Warnken said. 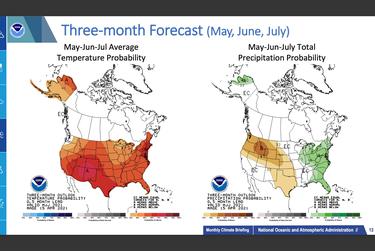 A large area of Texas, and much of the Western U.S., will likely have above average temperatures this summer, according to an April analysis by the National Oceanic and Atmospheric Administration.

Climate change has made summer droughts hotter and longer than they used to be in the southwest, according to a 2019 study authored by National Oceanic and Atmospheric Administration scientists. The study found that droughts occurring in today's warmer climate cause hotter temperatures than the same drought decades ago — the low soil moisture combined with higher temperatures produce stronger heat waves.

A large area of Texas will likely have above average temperatures this summer, according to an April 15 NOAA analysis.

Daniel Cohan, an associate professor of civil and environmental engineering at Rice University, is concerned about the power grid's performance this summer.

“If ERCOT is struggling to keep the lights on this week, that doesn't bode well for summer," Cohan said. “Certainly with climate change, it's possible we'll hit new records for heat waves."

And despite state lawmakers' advances on legislation aimed to address February's outages, Cohan said there is little the Legislature can do to better prepare the state's energy infrastructure for this summer. “It's too late to do a whole lot for this summer," he said.

Texas' susceptibility to blackouts has long been a concern for the North American Electric Reliability Corp., which has some authority to regulate power plants and oversee grid operators in the U.S.

“From my perspective, [Texas] doesn't have as much cushion as even ERCOT's math says that they should," said James Robb, its CEO and president.

Still, Michelle Michot Foss, a fellow in energy at Rice University's Baker Institute, said Texas' grid is better prepared for summer heat than extreme cold, and it's not unusual for the grid to creep close to its capacity in the hottest months.

“We deal with [heat] more often," she said. During the summer, she said, “the energy systems are better prepared."

Disclosure: Rice University has been a financial supporter of The Texas Tribune, a nonprofit, nonpartisan news organization that is funded in part by donations from members, foundations and corporate sponsors. Financial supporters play no role in the Tribune's journalism. Find a complete list of them here.

This article originally appeared in The Texas Tribune at https://www.texastribune.org/2021/04/15/texas-ercot-blackouts-summer-climate/.