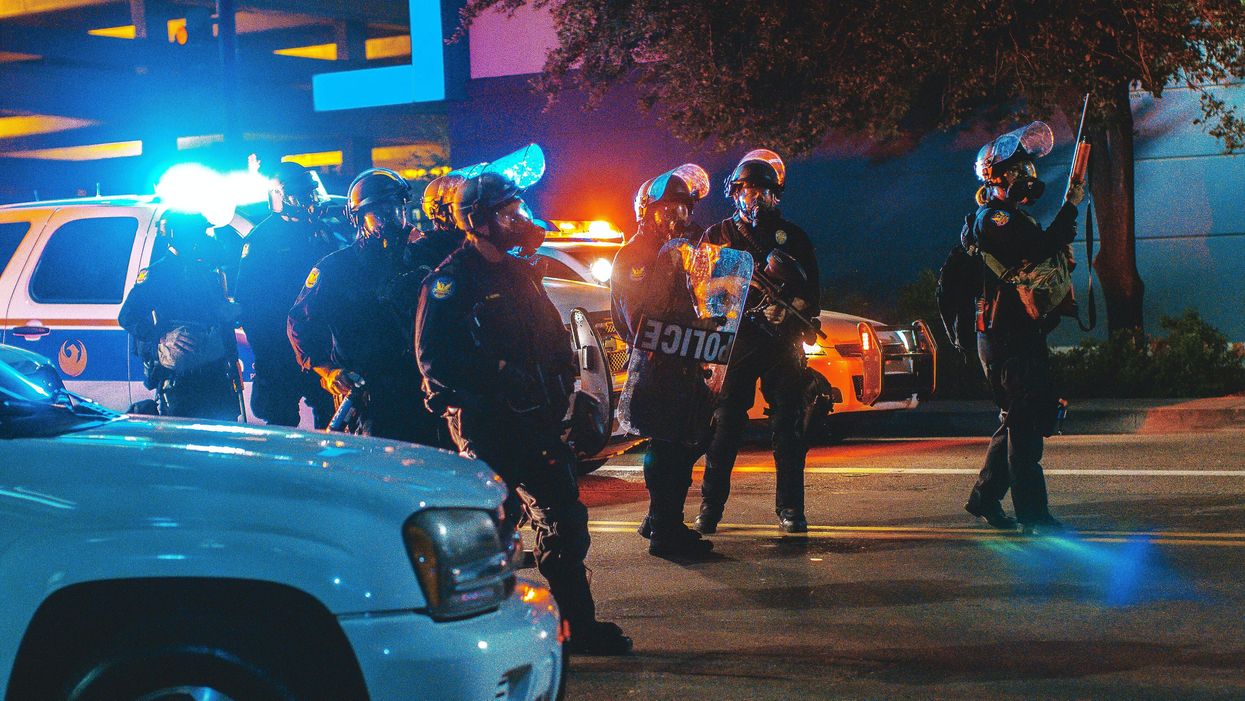 group of police in the middle of the road
Photo by AJ Colores on Unsplash
John Stoehr
April 12, 2021

Look, I'm no expert on, well, pretty much anything! But there is one thing I do know. There is one thing anyone can know if they are willing to see. It's that the people we all trust to keep the peace in this country aren't doing a good job of it. What's more, the people we entrust to keep the peace are often themselves responsible for the violence. It's getting to the point where I'm thinking it's a good idea to take away their guns.

Yes, I know. Taking guns away from local law enforcement officials sounds crazy. But think about it. Is it any more absurd than what we are seeing right now? How many times does a Black man have to die at the hands of a police officer who is looking for a reason—any reason—to use deadly force during a routine traffic stop? How many times does that have to happen before we start distrusting people with such power?

The crazy is worse than you think. After Daunte Wright, 20, was shot and killed Sunday by a cop in Brooklyn Center, Minnesota, the community was outraged. People started organizing. They started protesting outside the police station. They started demanding justice. Cops responded by arming themselves in riot gear and forming a thin line around the building as if civilization itself would collapse if it didn't hold.

There's more. Not only did police come out ready for battle, the mayor ordered a curfew, which was just the excuse the "warriors" needed to start assaulting unarmed American citizens with tear gas and "pepper bombs" and other "non-lethal" weaponry that can tear human flesh and cause serious injury. And that made the people who were demanding justice even more pissed off, which in turn provided another excuse to these militarized agents of the state to commit what would otherwise be felonies.

And this is only the beginning of the crazy. At some point, it's nearly certain, the family of Daunte Wright will bring the city of Brooklyn Center to court, claiming damages of a certain dollar amount. While criminal juries almost never hold police officers criminally accountable, civil juries are far more likely to award civil damages. That costs the city money that cities usually do not have. So they sell debt to Wall Street. In order to repay Wall Street, cities must raise revenues, which means raising taxes on city residents, which include members of the family of Daunte Wright. Seriously, is taking cops' guns away more absurd than all of this? I don't think so.

If we're not going to take their guns away (and we won't), then we should take away some of the power we have given them. Why? Because no one should be trusted with that much power. Police departments across the country have become, in effect, small occupying armies unaccountable to the democratic will that can, and that do, extract tribute1 in the form of loan repayments from residents they claim to serve and protect. This isn't just institutional racism. It's institutional racism that neuters republican government. It's institutional racism that, in the end, puts every one of us in a cage.

If we're not going to take their guns away (and we won't), then we need to rethink the amount of public trust we give them. We need to demand police officers understand what the 21st century demands on policing services. I'd say we should indoctrinate cops into believing in truth, justice and the American way, but since that's probably asking too much, political communities can do the next best and practical thing.

If they can't stop cops from acting like "warriors," then they outlaw these "warriors" weapons of war. Take them all away except a sidearm. Give them back to the federal government. If you can't stop police unions from being organized crime syndicates, then cities and states, with the right moral leadership, can ban pepper-spray, tear gas, body armor and other materiel. They can ban "routine traffic stops" if need be, except under strict, narrow and legally defined circumstances enforced under penalty of law. They can and should make lying on incident reports a crime deserving prison time.2

These would be pipe dreams if most cities were run by Republicans who believe police power is the solution to most social problems. But most cities are run by Democrats. Most cities are in states run by Democrats. Even Brooklyn Center's mayor, though independent, is a Liberian-American. His city is minority white. The political power is available if he's willing to find it democratically. It will take hard work, though,

And there's the rub. It's easier to give in to police departments, as Hizzoner did when he ordered a curfew, which gave armored cops an excuse to assault citizens legally. It's harder to push against entrenched interests however absurd they might be. Taking cops guns away would be hard, too, but don't tell me it's crazy, because now's crazy?