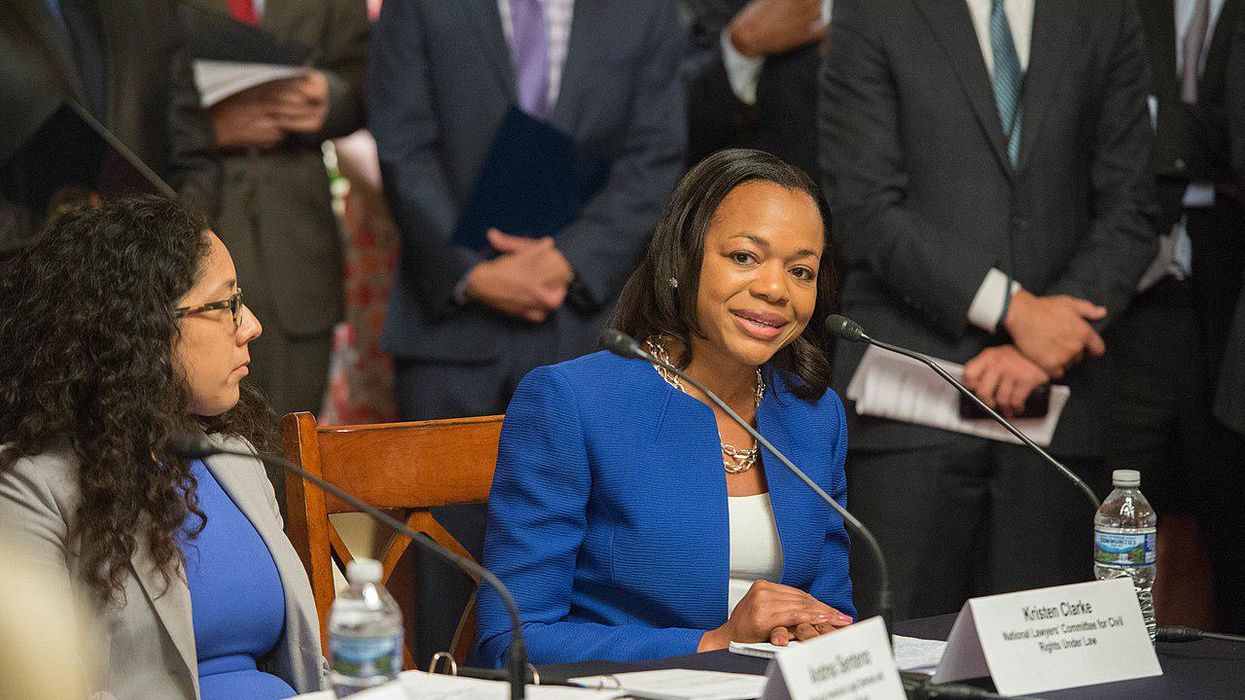 Kristen Clarke, President Joe Biden's nominee for assistant attorney general for the U.S. Department of Justice's Civil Rights Division, has become a major target of far-right politicians and pundits — who are slamming her over a 1994 controversy dating back to her days as president of the Black Student Union at Harvard University and mischaracterizing the events of 27 years ago. And Clarke is vigorously defended in recent articles by former U.S. District Judge Shira Scheindlin and the New York Times' Farah Stockman.

Clarke was only 19 when, in 1994, the late Wellesley College professor Tony Martin offered to speak at Harvard — and Clarke accepted his invitation, unaware that he had recently written an anti-Semitic book titled "The Jewish Onslaught." Clarke never expressed any sympathy for Martin's views, and according to conservative Washington Post columnist Jennifer Rubin — another Clarke defender — she was happy to meet with Jewish student leaders on campus and discuss their concerns about anti-Semitism.

Scheindlin, who heads the Board of the Lawyers' Committee for Civil Rights Under Law and spent 22 years a U.S. district judge for the Southern District of New York, believes that the "allegations against" Clarke are "nonsense" and that there is no reason to believe that she is anti-Semitic as some far-right pundits are claiming.

In an op-ed published by Newsweek this week, Scheindlin declares, "A dangerous smear campaign has been launched in an effort to spread misinformation about Ms. Clarke, her values and her record. It cannot be allowed to succeed…. The attack on Ms. Clarke trots out the old and worn trope that she is an anti-Semite, a scurrilous charge totally lacking in merit that has nonetheless been spreading in certain circles."

Clarke, Scheindlin notes, recently told The Forward, a Jewish publication, that she "100%... unequivocally denounce(s) anti-Semitism." And Clarke said of Martin, "Giving someone like him a platform, it's not something I would do again."

Scheindlin goes on to say that not only is Clarke not an anti-Semite, but also, she has a long civil rights resumé that includes working with the NAACP Legal Defense Fund and serving as president of the Lawyers' Committee for Civil Rights Under Law.

"In each of these positions," Scheindlin writes, "she led efforts to guarantee voting rights, educational opportunities, religious freedoms and accommodations, and to ensure a fair and just criminal justice system for all Americans. She has fought to ensure equal opportunities for all marginalized communities, including immigrants, sexual assault victims, LGBTQ+ citizens, and low-income Americans."

One of the far-right pundits who has been smearing Clarke is Fox News' Tucker Carlson, and Stockman — in a New York Times op-ed published this week — explains why his attacks are so misleading.

Discussing the Tony Martin controversy of 1994, Stockman writes, "It's true that his visit offended many Jewish students — Professor Martin was known at the time for promulgating the theory that Jews played a dominant role in the slave trade. Ms. Clarke has since admitted that the invitation was a mistake. And she's gone on to have an impressive career fighting for religious freedom for Jews. From 2011 to 2015, she led the civil rights bureau at the office of the New York attorney general, Eric Schneiderman, where she spearheaded a religious-rights initiative that ensured that Jewish employees could observe the Sabbath and other holy days."

Stockman adds that "many Jewish organizations have come to" Clarke's defense, including the Jewish Council for Public Affairs.

Carlson has claimed that Clarke has "worked very hard" to free Mumia Abu Jamal, who was convicted of the murder of Philadelphia police officer Daniel Faulkner in 1981 and sentenced to death.

"This, too, is a right-wing fever dream," Stockman explains. "She never worked on that case. Her sole connection is that, as a law student in 1999, she provided support to the organizers of a conference at Columbia Law School that featured a panel about the case. Her name appeared at the bottom of a flyer."

"Let's get real here," Stockman declares. "The real reason some conservatives want to take down Ms. Clarke is that she's been an effective champion of voting rights for Black, Brown and poor people. That's why she was nominated. And that's why people like Tucker Carlson are grasping at straws to tank her nomination with lies."