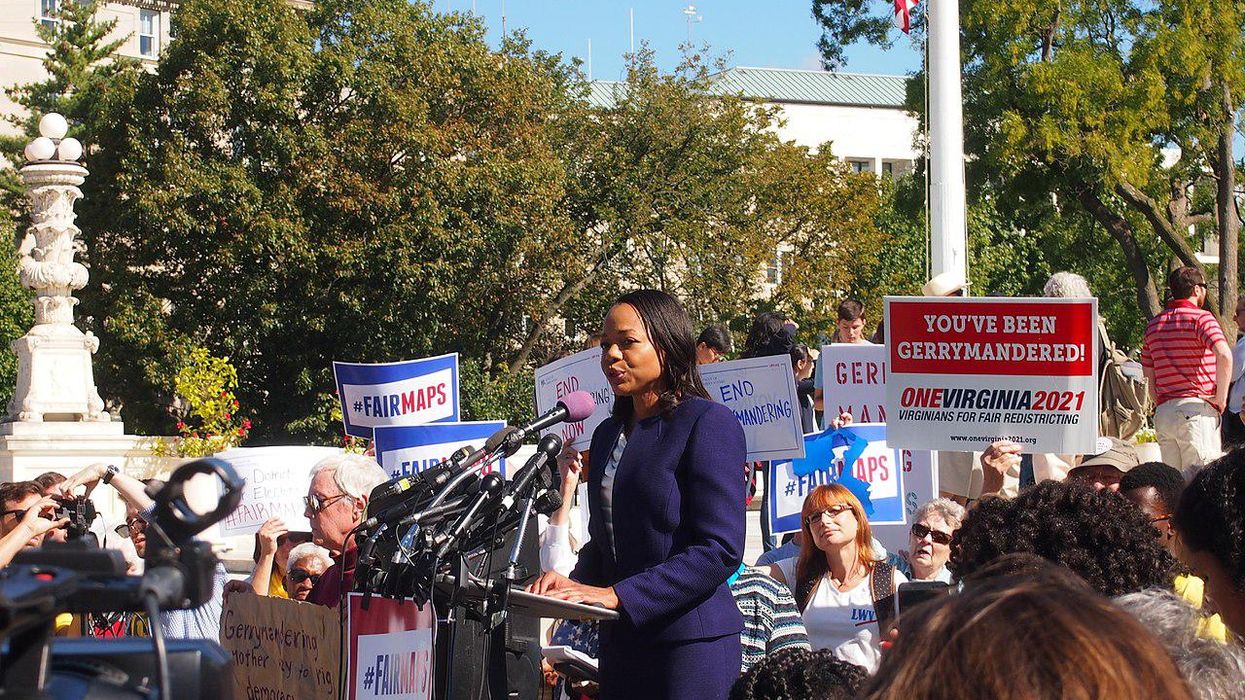 Attorney Kristen Clarke, President Joe Biden's nominee to head the U.S. Department of Justice Civil Rights Division, is being attacked by far-right Republicans for some of her activities as a student at Harvard University back in 1994. Conservative Washington Post opinion writer Jennifer Rubin discusses the anti-Clarke smear campaign in a March 17 column, slamming it as "lame" and saying that Republicans aren't telling the whole story about Clarke's activities 27 years ago.

In 1994, Rubin explains, Clarke was the 19-year-old president of Harvard University's Black Student Union when the late Tony Martin, a Wellesley College professor, offered to speak at Harvard — and Clarke accepted his invitation. Clarke, Rubin notes, was "not aware he had recently written an anti-Semitic book."

Rubin, who is Jewish, stresses that Clarke did not share Martin's views and distanced herself from them 27 years ago — a fact that Republicans are ignoring.

"Kristen Clarke, President Biden's nominee to head the Justice Department's Civil Rights Division, finds herself in the middle of a tiresome rerun of an all-too-familiar Republican smear campaign against women of color," Rubin explains. "It goes like this: Once a nominee is announced, Republicans search for some statement from her to twist and blow up out of proportion. They then throw around terms such as 'radical' or 'racist' to slander her. This routine comes from a party that is committed to anti-voting legislation and that does not blink when Sen. Ron Johnson (R-Wis.) says White supremacist rioters did not scare him because they are patriots, but Black Lives Matter demonstrators do."

Martin, who died in 2013 at the age of 70, was controversial and divisive. His 1993 book, "The Jewish Onslaught," was widely denounced as anti-Semitic — and he promoted the Nation of Islam's book, "The Secret Relationship Between Blacks and Jews" on campus.

But Clarke, according to Rubin, was unaware of "The Jewish Onslaught" when she accepted Martin's invitation to speak at Harvard. And Rubin, for her column, interviewed Elie G. Kaunfer — who knew Clarke in 1994, when Kaunfer headed the Jewish student organization the Harvard-Radcliffe Hillel.

Kaunfer told Rubin, "I took the time to talk to Clarke and realized that she did not share those views." According to Kaufner, Clarke's critics "did not take the time to understand that Clarke is not a racist."

Rubin also interviewed Michael Goldenpine, who was a student at Harvard in 1994 and was a leader for Hillel. According to Goldenpine, Clarke was glad to meet with Hillel and discuss their concerns about Martin.

Goldenpine told Rubin, "She participated. She committed to build the relationship…. We were listened to. That doesn't happen without her leadership…. I don't believe Kristen Clarke was advocating Black supremacy any more than I believe Jonathan Swift was advocating eating Irish babies."

Rubin concludes her column by slamming GOP attacks on Biden's nominee as one of the "lamest right-wing smear campaigns to date" and stressing that Republicans haven't bothered to see what Clarke actually had to say in 1994.

"Considering their risible claims of racism all occurred when Clarke was a teenager, it is questionable any of it is relevant," Rubin writes. "What is outrageous is that her actions and words are being taken out of context and distorted, that her work with the Jewish community is ignored and that false charges of anti-Semitism are used to bring down an eminently qualified woman. Perhaps Republicans should focus on the real racism in their own midst — starting with censuring Johnson and ending their efforts to disenfranchise Black voters."