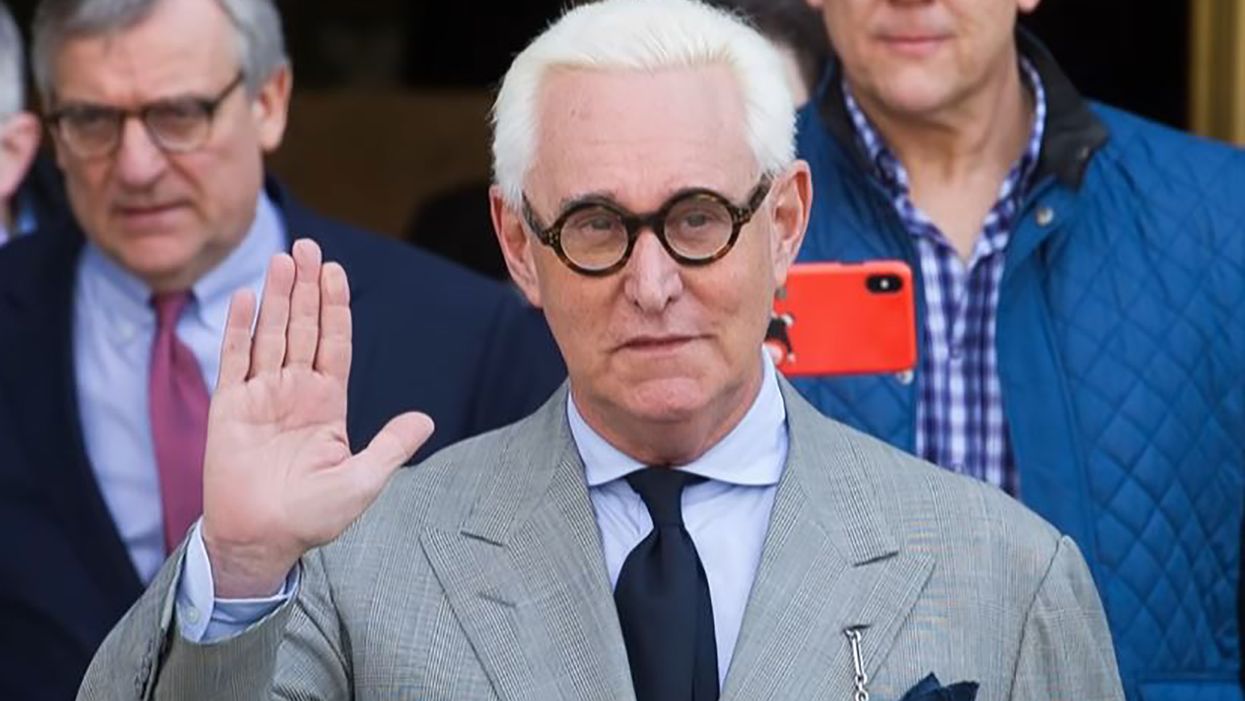 Longtime Republican operative and Donald Trump confidant Roger Stone, along with an allied far-right leader, is attempting to take down fellow GOP operative and MAGA Twitter personality John Cardillo, and it's getting messy.

Cardillo, a former New York police officer turned Newsmax TV host, who later became a conservative Twitter pundit of sorts, was once a close friend and ally of Stone. But in recent weeks the duo have apparently become bitter enemies. The rift is somewhat mysterious in origin, but appears related to Stone's allegations that Cardillo is "pray[ing] on single women" [sic], while arranging "phony divorce papers with the county."

Over the past three weeks, Stone has posted a series of messages to Parler making allegations against Cardillo. "What kind of an asshole files phony divorce papers with the county, tells his wife nothing, and actually gets the date of their marriage incorrect in the filing that he has no intention of bringing to trial or settlement just so he can pray on single women? #busted #Congentalliar #Cardiilo #asswipe," Stone posted to Parler this week.

Stone included copies of the purported divorce documents in his Parler post, but Salon has been unable to verify their authenticity.

A potential clue to the Stone-Cardillo feud emerged in another post, when Stone expressed anger that Cardillo had not spoken up for an NYPD officer named Sal Greco, who reportedly received money from Stone's wife and is now under "investigation by NYPD's Internal Affairs."

In another recent message posted to Parler by Stone, the self-described "dirty trickster" claimed Cardillo was a "bunko," "conman," "b*llshit artist," and a "psycho." "The best one yet — one woman has come forward to say that she and @johncardillo were attempting to have a baby invitro at the time she believed that she was his girlfriend and did not know that he was married. She's going to make one hell of a witness on the stand," Stone wrote in late March in Parler messages.

Cardillo didn't return a Salon request for comment. Stone responded in curious fashion that perhaps suggested faulty voice-transcription software. "I have a firm policy of only responding to increased [sic] from legitimate news organizations. Salon does not meet this criteria," Stone wrote. Notably, following a Salon's inquiry to Stone via email, all the Parler messages in question disappeared from the social media site.

But the pile-on from the far right didn't stop, with "Stop The Steal" activist Ali Alexander writing on Telegram, "I warned everyone of John Cardillo. Remember when he tried to kill the Stop the Steal movement? Now you all know more about him." Alexander has long not seen eye-to-eye with Cardillo over the perception that the latter is no right-wing enough.

The now-former Newsmax host is best known for his controversial takes on social media. "Does this look like an appropriate father/son interaction to you?" Cardillo tweeted at the end of 2020, questioning a picture of Joe Biden for embracing his son Hunter and giving him a kiss on the cheek.

Clear back in 2015, Cardillo caught blowback over posting a picture of himself pointing his gun at the camera, tweeting, "I'm really enjoying these Eggs Benedict so move along now. #BlackBrunchNYC," in the wake of protests occurring in California and New York at restaurants during brunch hours to protest the killings of the unarmed Black men Michael Brown and Eric Garner. The MAGA Twitter personality, as Salon has previously reported, has also gone after Rep. Alexandria Ocasio-Cortez, D-N.Y., claiming she is "spoiled and pampered." With more than 226,000 Twitter followers and regular retweets by Donald Trump Jr., Cardillo remains in a prominent position in right-wing social media, even as he attempts to fend off fellow denizens of MAGA world who hate his guts.