The anatomy of a spin job: How Fox News tried to smear George Floyd protesters after a peaceful night 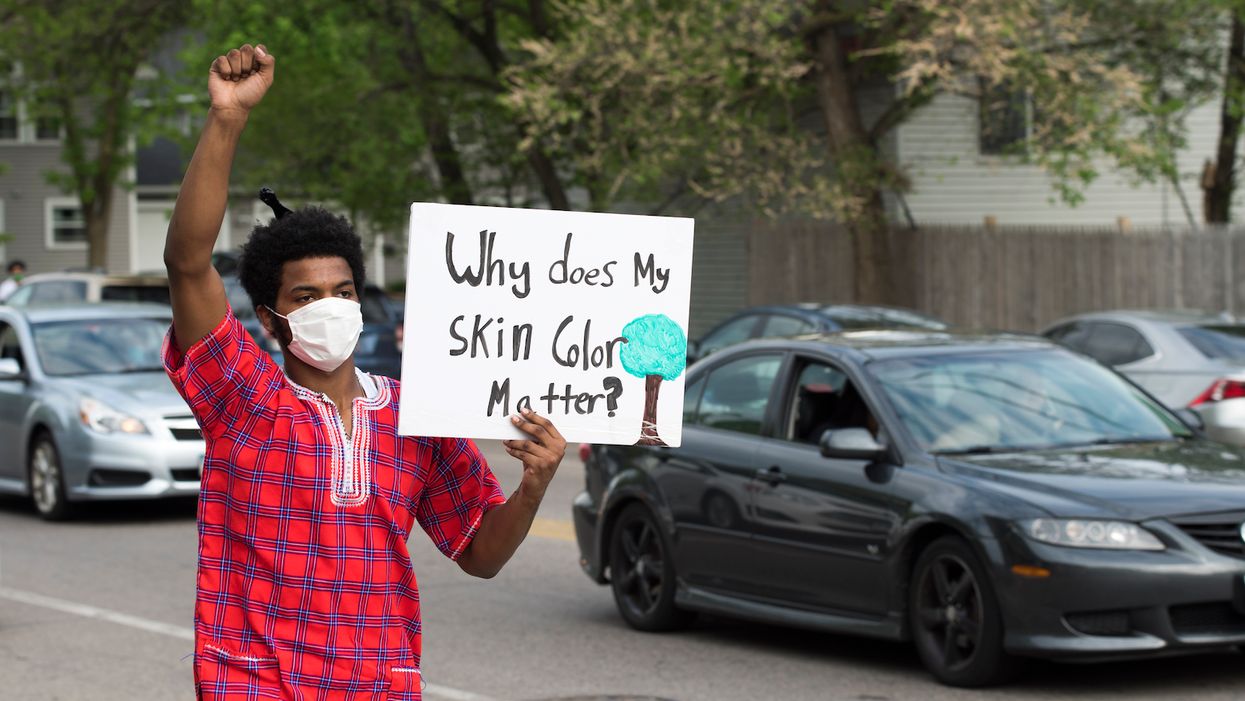 Thousands gathered on foot and in cars in south Minneapolis to protest against police violence and call for justice for George Floyd. On May 25, Minneapolis Police officers arrested George Floyd, handcuffed him, then put a knee on his neck as he said he wasn't able to breath. George Floyd appeared to stop breathing and died soon after. Protesters met in the area of Chicago Avenue and 38th Street, but many blocks in the area had people with signs while others drove by protesting from their cars. People marched east on 38th Street and some worked their way to the Minneapolis 3rd precinct building where there were clashes with police after dark. 2020-05-26 This is licensed under the Creative Commons Attribution License. Credit: Fibonacci Blue
Cody Fenwick
April 22, 2021

Despite the fact that Derek Chauvin's murder of George Floyd was captured on film and widely denounced even by fellow police officers, right-wing commentators had a bizarre collection of reactions to the jury's finding on Tuesday that the former cop was guilty of the three charges against him. One common theme was to suggest that despite the guilty verdict in the trial, Black Lives Matter protesters who were outraged by the murder would still not be satisfied and would riot in response.

You got your justice so I’d assume there will be peace in Minneapolis tonight? No rioting? No looting? No harassing officers?
— Tomi Lahren (@Tomi Lahren)1618953332.0

As it happened, the response to the verdict from protesters featured a mix of emotions, some celebrating, some still grieving. As the Associated Press reported:

With that outcome, Black Americans from Missouri to Florida to Minnesota cheered, marched, hugged, waved signs and sang jubilantly in the streets. The joy and relief stood in stark contrast to the anger and sometimes violent protests that engulfed the country following Floyd's death.

But Tuesday's celebrations were tempered with the heavy knowledge that Chauvin's conviction was just a first step on the long road to address racial injustices by police.

But the danger and unreasonableness of Black Lives Matter and progressive activists is a central part of right-wing messaging, especially on Fox News. So they weren't going to let the facts get in the way of the narrative. That's how on Wednesday, we got a Fox News story by reporter Danielle Wallace with the headline "Portland protests post-Derek Chauvin guilty verdict result in 2 arrests, bike officer punched in head," and an opening two paragraphs that explained:

Portland was rocked by violent demonstrations Tuesday – even after a Minnesota jury found former Minneapolis police officer Derek Chauvin guilty of the murder of George Floyd.

At least two people were arrested and video first published by The Oregonian and retweeted by police showed a demonstrator dressed in all black punching a bicycle officer in the head before more officers piled on top of the suspect. Police also released photos showing shattered windows at local coffee shops and graffiti of the anarchy symbol and ACAB, an acronym meaning "All Cops Are B*******."

The opening sentence sticks with the story they wanted to tell all along — the one previewed by Lahren on Tuesday. Except even the details in the headline don't seem to support the idea that the city "was rocked by violent demonstrations" — how rocked could the city be if there were only two arrests?

It's true the linked video appeared to show a civilian assaulting a police officer after another officer brushed by the civilian from behind on a bike. Assault can be a serious crime, but it is not typically national news, and it is not clear how this incident "rocked" the city of Portland. There's also no sign the assault itself was a part of "violent demonstration"; rather, it may have just been the result of a tense interaction with police. And it's hard to tell from the angle of the video whether the police officers' response to the civilian's punch was proportionate and appropriate — a question Fox News doesn't even seem to consider.

The other event Fox News discussed was small-scale anti-cop vandalism. The extend of vandalism appeared to be two business windows, one shattered and one intact. Fox News included three photos from three different angles of the same windows in its article. (There's also a reference to a dumpster being set on fire and then extinguished, though there's no claim this was caused by a protester). Minor vandalism is a crime, but it occurs all the time without much wider implications.

What's particularly notable about the article, though, is a note at the bottom which explained that Associated Press content is used in the Fox News piece. This is a common industry practice — outlets pay to license AP stories for their own use, which sometimes they reprint verbatim, and sometimes they use AP content interspersed with original writing and reporting. The AP story Fox News drew from included the paragraph I quoted above, noting that the reaction to the verdict "stood in stark contrast to the anger and sometimes violent protests that engulfed the country following Floyd's death." Fox News chose not to include this paragraph in its story, and why should it? That's not the story it wanted to tell.

Demonstrators have also set fires, broken windows and vandalized buildings, including a church, a Boys & Girls Club and a historical society in recent days over the deaths of Daunte Wright in Brooklyn Center, Minnesota, and Adam Toledo in Chicago, as well as a fatal police shooting in Portland last week.

This is taken almost verbatim from the AP, except that instead of "Demonstrators," the AP said "Small groups of protesters." Fox News clearly wanted to play up the nature of the menace and avoid any language that differentiated violent protesters from other activists. (In fact, the Fox News story didn't use the word "protesters" at all.)

Elsewhere on its website, Fox News a story about a sign in Minneapolis at George Floyd Square that has a sign offering advice "For White people in particular," urging them not to make the protesters about themselves. In a caption on the story, Fox News asked of the story: "IS THIS 'HEALING'?"

So here's what basically happened: After a broadly peaceful and mournful reaction to the Chauvin verdict across the country, Fox sought to feed into its pre-arranged narrative by blowing up a couple local police stories in Portland into a larger crisis. The story ignored reporting about the peacefulness of the national reaction and chose to try to stoke conflict and find ways to fan the flames. However, at the very end of the article, the author included a quote that actually seemed to give away the game about the events that supposedly "rocked" the city of Portland:

"One thing to note, the area affected by the criminal activity was contained within few blocks of downtown Portland," the bureau added. "This is not to minimize the impact to those who were victimized by the property damage, as we take any damage seriously. But the overall geographical area that was impacted was relatively small."