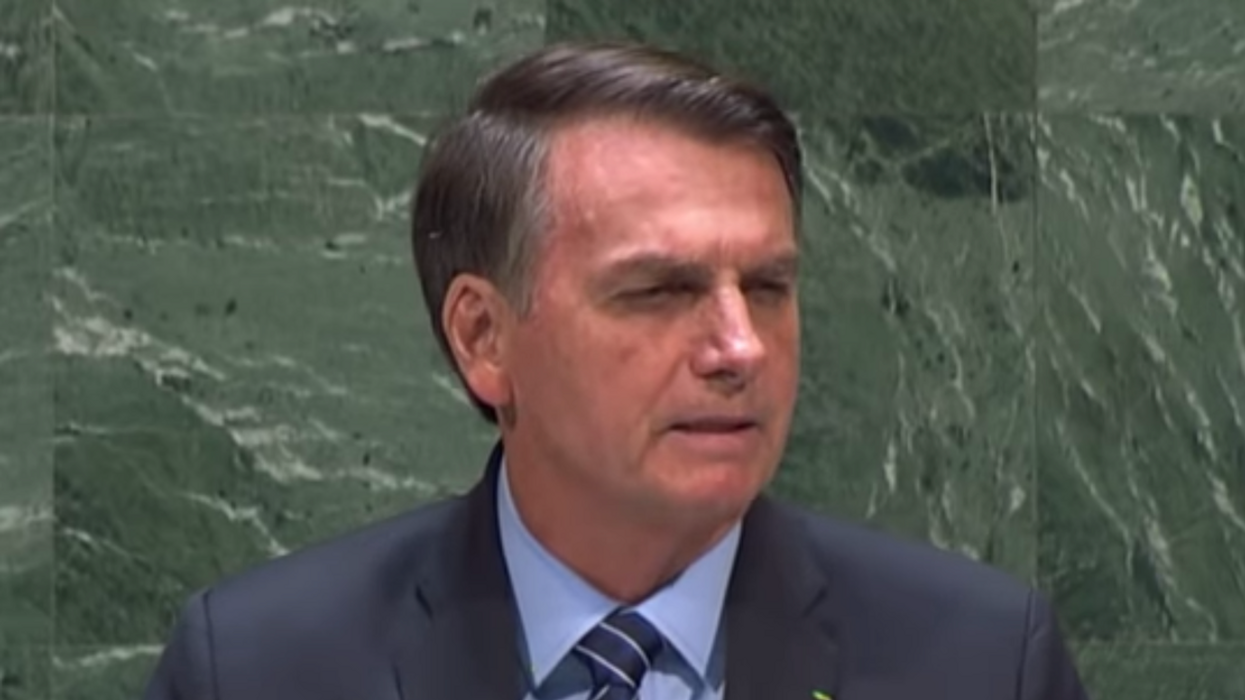 Beset by political, public health, and environmental crises amid an emerging progressive consensus for his impeachment, historic Cabinet turnover, and soaring Covid-19 deaths, Brazilian President Jair Bolsonaro on Thursday faced a chorus of calls to resign.

Calling Bolsonaro "a threat to democracy," opposition lawmakers on Wednesday filed an impeachment request against the far-right president, accusing him of attempting to co-opt the country's military "in an authoritarian way," according to O Globo.

The lawmakers' move came a day after the heads of all three branches of the armed forces resigned following Bolsonaro's dismissal of Defense Minister Gen. Fernando Azevedo e Silva on Monday.

"The use of the armed forces by violent means or based on grave institutional threats is an extremely serious matter," the lawmakers wrote. "Given the dark past lived by Brazil's democratic institutions, such conduct rises to the level of criminal responsibility."

March 31 marked the 57th anniversary of the 1964 U.S.-backed coup that overthrew the democratically elected reformist President João Goulart and ushered in a 21-year period of military dictatorship, under which tens of thousands of people—including future President Dilma Rousseff—were tortured, murdered, or disappeared.

“We have a president who is trying to pressure the armed forces into serving his coup-mongering, authoritarian delu… https://t.co/ADsnh05Yk3
— Arlindo Chinaglia (@Arlindo Chinaglia)1617219691.0

Bolsonaro, an army officer during the dictatorship, has prasied the military regime while taunting its victims and lauding one of its leading torturers as a "national hero."

Remembering the coup, former Chamber of Deputies President Arlindo Chinaglia—who like Rousseff and former President Luiz Inácio Lula da Silva is a member of the Workers' Party (PT)—told The Guardian that "we have a president who is trying to pressure the armed forces into serving his coup-mongering, authoritarian delusions."

Marcelo Freixo, a federal deputy representing Rio de Janeiro for the Socialism and Liberty Party (PSOL), asserted Wednesday that Brazilians "cannot be bystanders to this barbarism."

"There is an attempt by the president to organize a coup," said Freixo. "It is already underway, and that is why we are reacting."

On Wednesday, six potential candidates for the 2022 presidential election released a joint statement remembering the destruction of democracy in 1964 and warning that three decades after the restoration of the democratic constitution, "Brazil's democracy is under threat."

"There is no shortage of examples of the way authoritarianism can emerge from the shadows if societies are careless and fail to speak up in defense of democratic values," cautioned the statement.

Just imagine for a moment being Dilma Rousseff. She went to prison as a young woman for fighting Brazil's military… https://t.co/OTJvMrIRiF
— Glenn Greenwald (@Glenn Greenwald)1617221439.0

On the same day, Bolsonaro's replacement defense minister, Gen. Walter Souza Braga Netto, raised eyebrows and ire by releasing an official Defense Ministry statement arguing that the 1964 coup should be "understood and celebrated."

"Events that took place 57 years ago... can only be understood from the context of the time," said Braga. "Brazilians realized the emergency and took to the streets, with broad support from the press, political leaders, churches, the business sector, various sectors of organized society, and the armed forces."

"It is absurd for the federal government to continue sponsoring advertising campaigns that encourage so-called early treatment, a practice widely contested by the scientific community, without any proof of its effectiveness," the lawmakers' request stated.

One of the departing military chiefs, army Gen. Edson Leal Pujol, had angered Bolsonaro by criticizing his handling of the coronavirus pandemic, which according to Johns Hopkins University has claimed over 321,000 Brazilian lives, the world's second-highest death toll after the United States.

More than 66,000 Brazilians have died of Covid-19 in March, with epidemiologists warning that the crisis will worsen.

Bolsonaro—who has been dubbed the "Trump of the Tropics" for his political and ideological affinity with the former U.S. president—has dismissed Covid-19 as a "little flu," and has refused to follow or promote mask-wearing, quarantine measures, and social distancing. Bolsonaro, who contracted the virus last year, has also encouraged large gatherings and disparaged vaccines.