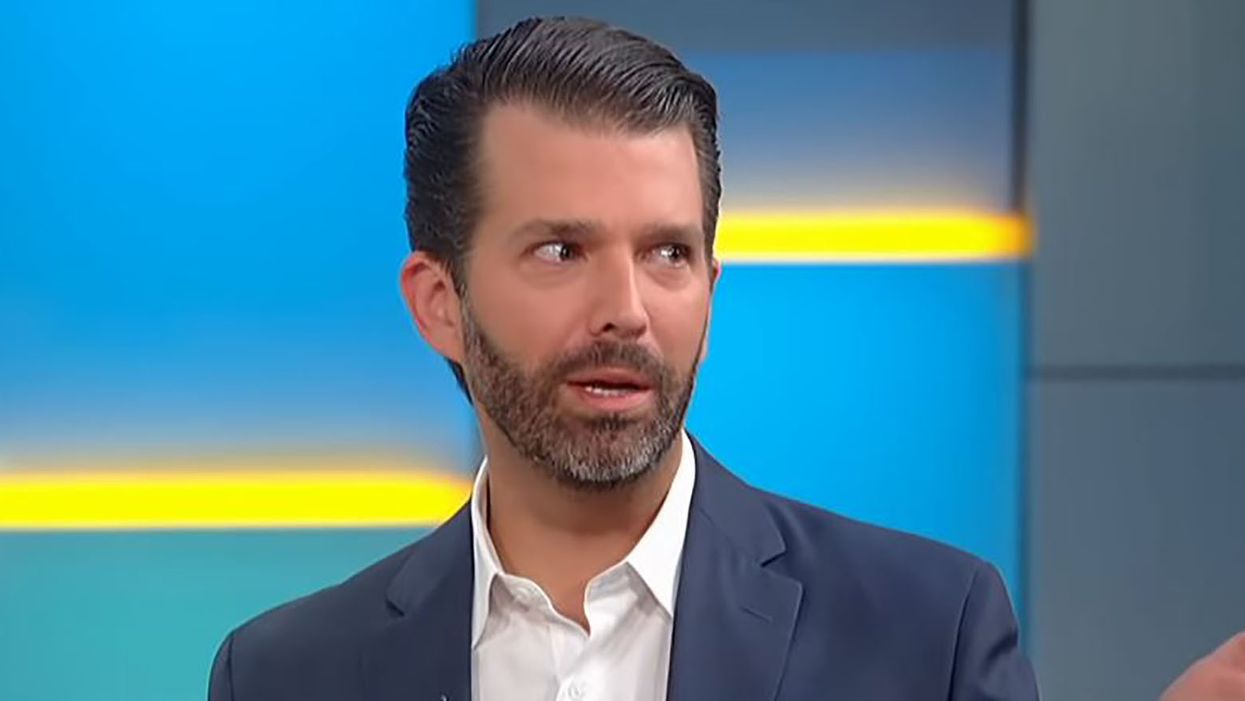 Donald Trump, Jr. ignited a Twitter storm with his recent post mocking President Joe Biden's series of trips up the steps of Air Force One on Friday, March 19.

Former President Donald Trump's son tweeted an edited parody clip that began with his father on the golf course striking a ball, reports HuffPost. At one point during the clip, it flips to Trump's golf ball hitting Biden in the head as he trips up the steps while boarding Air Force One at Joint Base Andrews.

While Trump's right-wing supporters seized the moment by relentlessly mocking the president, others pushed back with mocking reactions toward Trump, Jr. Many Twitter users who criticized Trump Jr. the similarities between the seemingly violent post and a previous clip that highlighted violence toward former Democratic presidential candidate Hilary Clinton.

One Twitter user wrote, "Right before he tripped, Joe Biden successfully got 100 million vaccine shots administered in 58 days and got $242B in stimulus checks sent out to 90 million people. Your dad got upwards of 500,000 people killed."

Another person tweeted, "So strange that a president and family that casually embraced dumb, violent memes for four years wound up inciting a deadly attack on the Capitol."

@DonaldJTrumpJr @DanRather said it best "Tripping while running up the stairs to Air Force One is embarrassing. Tri… https://t.co/bUPXntRLyA
— Cathie Laama (@Cathie Laama)1616182519.0

@DonaldJTrumpJr @DanRather said it best "Tripping while running up the stairs to Air Force One is embarrassing. Tri… https://t.co/bUPXntRLyA
— Cathie Laama (@Cathie Laama)1616182519.0

Despite Trump Jr.'s clip, the White House released a statement insisting the wind was to blame for Biden's stumbling. On Friday, White House deputy press secretary Karine Jean-Pierre spoke with reporters where she discussed the wind conditions as she offered an update about the president's health.

"It's pretty windy outside. It's very windy. I almost fell coming up the steps myself," Jean-Pierre said adding that Biden "is doing 100 percent."

White House communications director Kate Bedingfield also chimed in about Biden's fall as she suggested that he is "just fine." "I know folks have seen that President Biden slipped on his way up the stairs to AF1, but I'm happy to report that he is just fine and did not even require any attention from the medical team who travels with him," Bedingfield tweeted. "Nothing more than a misstep on the stairs."