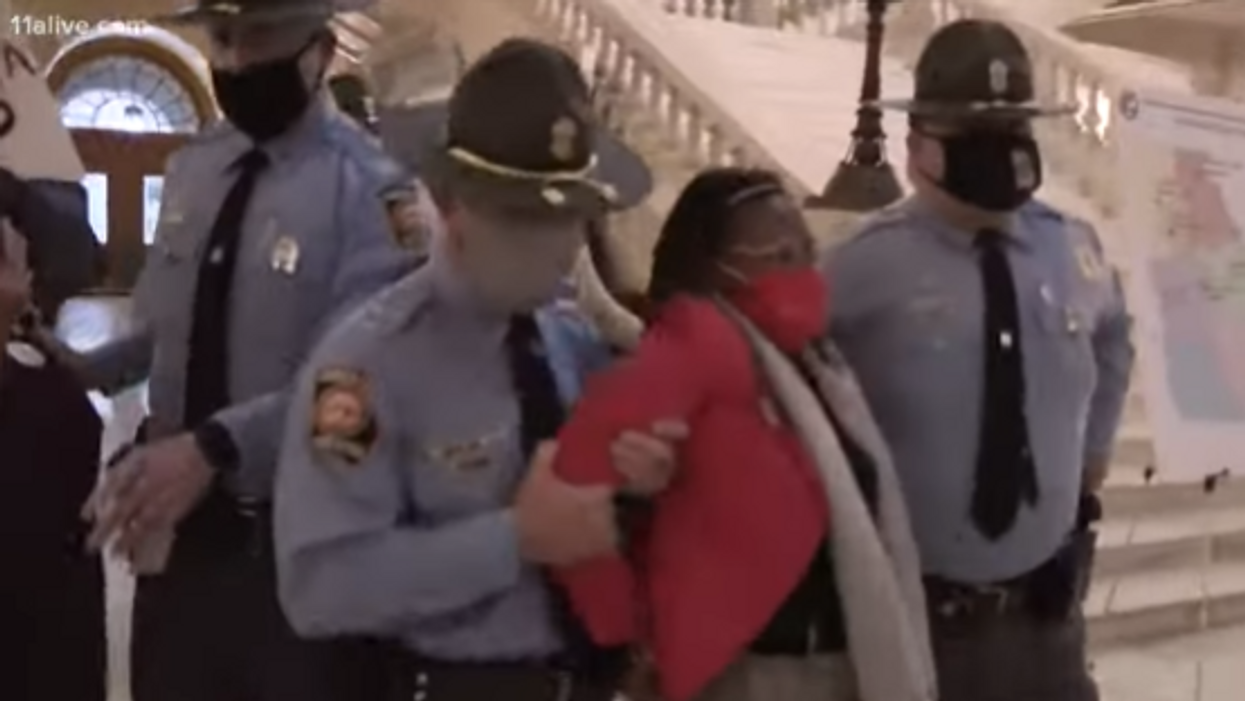 The arrest of Georgia State Rep. Park Cannon (D) set Twitter ablaze on Thursday evening as social media users watched footage of her being apprehended without probable cause.

According to the Atlanta Journal-Constitution, Cannon was arrested by Georgia state troopers and hit with felony charges for knocking on Gov. Brian Kemp's (R) office door.

Georgia State Patrol confirmed that Cannon had been charged with "obstruction of law enforcement and disrupting General Assembly sessions" as she voiced her concerns about the voting rights bill Kemp signed behind closed doors. The lawmaker argued that Georgians should be allowed to witness the signing of the sweeping voting rights legislation.

Tamara Stevens, one of the community activists who were with the Georgia lawmaker, pushed back against the offenses Cannon was charged with arguing that she had not been disrespectful.

"She knew he was signing a bill that would affect all Georgians — why would he hide behind closed doors? This isn't a monarchy," Stevens said. "You have a women of color fighting for the rights of Georgians and they arrested her for knocking on the door because she wanted to witness our governor sign the bill."

“Why are you arresting her?” This Facebook Live video from @TWareStevens shows the moment authorities detained stat… https://t.co/8lTyFLHK7c
— Greg Bluestein (@Greg Bluestein)1616714120.0

In the wake of Cannon's arrest, social media users also fired back with critical reactions to Georgia law enforcement. While some users noted the discrepancies in the report compared to the footage, others highlighted the double standard between Cannon's actions and the angry mob of Trump supporters' actions during the insurrection on the U.S. Capitol.

After being released from the Fulton County jail, Cannon took to Twitter with a series of tweets that included photos and a message to her supporters who sounded off on her behalf amid the ordeal.

She tweeted, "Hey everyone, thank you for your support. I've been released from jail. I am not the first Georgian to be arrested for fighting voter suppression. I'd love to say I'm the last, but we know that isn't true. #SB202."

Cannon added, "But someday soon that last person will step out of jail for the last time and breathe a first breath knowing that no one will be jailed again for fighting for the right to vote. #SB202"

Although Cannon has been released, the outrage has not waned. On Thursday evening, Sen. Raphael Warnock (D-Ga.)—who also serves as senior pastor at Ebenezer Baptist Church where Cannon is a member—put the disheartening incident into context.

"Today is a very sad day for the state of Georgia," he said. "What we have witnessed today is a desperate attempt to lock out and squeeze the people out of their own democracy."