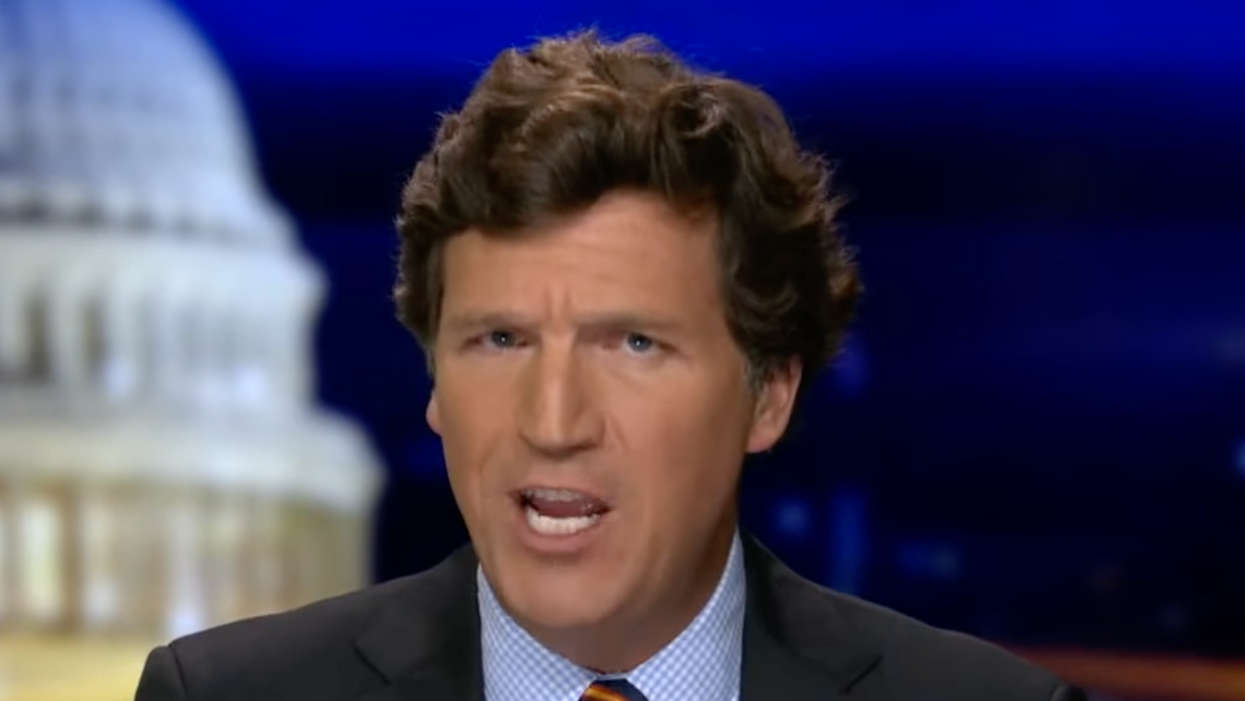 I'm not a lawyer—simple country, unfrozen caveman, or otherwise—but I have to think that knowingly spreading lies about the one thing a company does, thereby shredding that company's credibility in the eyes of millions of Americans, is kind of a big deal ... and might just get you in a wee bit of trouble.

Like if I said I'd stayed at a Trump hotel (which I've never done, for the record) and claimed my black-light inspection revealed a veritable Jackson Pollock installation of unaccounted-for horrors ... and that the bedbugs emptied more blood from me than an gin-besotted phlebotomist could ever dream of ... and that the vegan mango salsa was just a bit on the tart side—well, I'd expect to receive a clammy yellow fuck-jumble of a letter from the large man himself.

In other words, you can't just say—or promote—any fool thing you want to, especially if you know it isn't true.

Which is where Fox News comes in. On Friday, Dominion Voting Systems gifted Fox with a $1.6 billion defamation lawsuit, which comes on the heels of a similar suit Smartmatic filed last month seeking a whopping $2.7 billion in damages.

SHACKLEFORD: "As you know, part of proving that a statement is defamatory is to prove that it was made either knowing the statements were false or with reckless disregard for the truth. You pointed out to your viewers that our complaint lays out in gory detail over days and days and weeks in November and December of last year, Fox kept spouting these lies about Dominion, these devastating lies about Dominion on their airwaves even while they were being told the truth over and over again.

"And yes, they were told the truth by Dominion. Dominion sent multiple emails and letters and retraction demands, but there was also a chorus of bipartisan officials explaining how these lies were false—how the election, how Dominion machines performed as they were supposed to and accurately counted the votes."

STELTER: "How do you respond to the argument that Fox has already made against Smartmatic, which is, 'We were just covering matters of legitimate public interest. There was a grand debate going on about the election results, and we were just airing all sides of the matter'?"

SHACKLEFORD: "So Fox was not reporting the news with these reports that are outlined in our complaint. Fox was not giving voice to some grand political debate. Fox was repeatedly stating as fact, putting on Sidney Powell and Rudy Giuliani and also with their own anchors endorsing what Sidney Powell and Rudy Giuliani were saying, all these lies about Dominion and they were stating them as fact. And you're right, they did have a Dominion spokesperson on at one point; it was much smaller viewership for that show, and Fox did not promote it like they promoted the [Maria] Bartiromo and the [Lou] Dobbs and other shows they put throughout their massive social media network. But as you also know, Brian, you can't get away with defamation by saying the truth in the morning and then lying through your teeth in the afternoon. That doesn't cut it. If that were the case then all any media organization would have to do is issue a retraction … after they've done all the damage, and that would be it, but that's not the law of defamation."

Damn, that doesn't sound good for Fox at all.

Of course, complicating Fox's defense is the fact that the network snapped to attention after Smartmatic sent the network a letter demanding a retraction, running a segment debunking common election-fraud claims during shows hosted by three of Fox's smarmiest liars—Jeanine Pirro, Maria Bartiromo, and Lou Dobbs. (Dobbs has since been canned.)

Does anyone really think Fox didn't know what it was doing? After Fox called Arizona for Joe Biden on election night, it looked like its viewers were poised to abandon the network for loopier la la lands like OANN and Newsmax, so it needed to tighten its hold on the barmy Trumpbots it had nurtured over the previous four years.

What better way to do that than suck up to Trump with renewed vigor?

Ah, but now the sword of Damocles looms. The only question that remains is, will it take just a few fingers or lop off an entire limb?