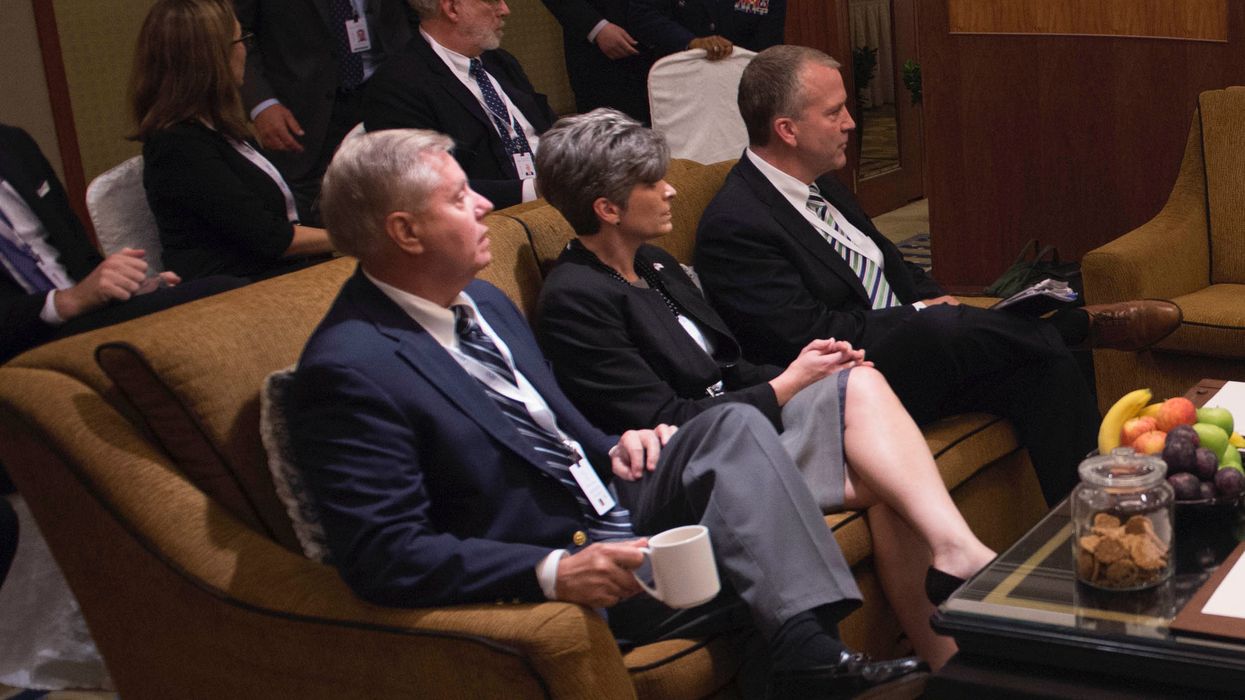 The second impeachment trial of Donald Trump opened with a bang.

Lead House manager, Democratic Rep. Jamie Raskin of Maryland, spoke a few words and then went to the tape. The senators serving on Trump's jury and everyone watching over broadcast then saw 13 minutes of anarchy, violence and fear that made vivid the detailed events of January 6th, starting with Trump offering one final incitement to the crowd at his "Stop The Steal" rally and culminating with his congratulatory tweet issued later that evening which asked the mob to "remember this day forever!"

Missouri Republican Sen. Roy Blunt said viewing that video was "the longest time I've sat down and just watched straight footage of what was truly a horrendous day." Sadly, however, it wasn't horrendous enough for Blunt to recognize that the impeachment trial is a constitutional necessity. Blunt voted on Tuesday with the majority of his fellow GOP colleagues to not proceed with the first-ever trial of a former president. So as harrowing as the opening footage was, it likely won't result in enough votes to impeach Trump and bar him from holding office in the future. The vast majority of Republicans from the national leadership to the Party committees all over the country to the average, everyday voter, simply do not think what happened that day was anything to get worked up about. And they are certainly not prepared to admit that Donald Trump did anything wrong at all. At this point, you have to assume that Trump's famous quip that he could shoot someone on 5th Avenue and not lose any votes is literally true.

That hasn't deterred the Democrats from trying Trump before the Senate, however, in hope that there is at least a record of what happened. House Managers Rep. Joe Neguse of Colorado and Rep. David Cicilline of Rhode Island methodically laid out their argument that impeachment of a president under these circumstances is not only constitutional but historically well documented. Raskin presented the opening argument making the case that what happened on that day was so dangerous that the former president must be impeached and barred from ever holding federal office again. He shared his own horror, revealing that his own family was at the Capitol that day, in stark emotional terms illustrating the human dimension of that incursion into the building.

It was an impressive first day for the managers but it was not quite as auspicious for the former president's defense team.

It's probably wrong to be too critical of them since they have the worst client in the world and they just took on the case a little over a week ago after the president's former lawyers abruptly quit. So, when his new lawyer Bruce Castor took to the podium it was with the understanding that they might not be fully up to speed. But no one expected anything as bad as what Castor delivered. He rambled and meandered and seemed to not have any point other than compliment the House managers, suck up to the senators and admit that Trump lost the election even suggesting that it might be better to prosecute him in a court of law rather than the Senate. His employer was reportedly apoplectic and yelling at the TV. He did the one thing Trump did not want him to do.

Trump's other lawyer, David Schoen, was more polished but much more disturbing. His delivery was frenetic and hostile, barely able to contain his contempt for the process and threatening repeatedly that the trial was going to "tear the country apart," which no doubt soothed his boss after Cantor's bizarre performance. His half-baked arguments against the constitutionality of the process were nothing more than window dressing since more than 40 Senators had already signaled that they would buy anything he said so there would be no conviction regardless.

The fact of the matter is that the two of them could have come out and done an interpretive dance to "YMCA" and it wouldn't have made any difference. The fix was in on this from the beginning and everyone knows it.

Nonetheless, the Democrats did get one more Republican over to their side than was expected. Louisiana Sen. John Cassidy voted to go ahead with the trial along with the other five Republicans who were expected. It's a long way from the 17 they would need to convict but it does show that a handful of them have too much pride to pretend to believe the nonsense Trump and his allies are trying to force them to swallow. It's obvious what Trump did and the Democrats have the evidence, a legal case backed up even by prominent conservative lawyers and academics, and the historical precedents. They also have the advantage of the reality of what we all saw with our own eyes that day and all the video that's emerged since then, not to mention the hundreds of arrests of insurrectionists Trump said he loved and believed were "very special" as they sacked the Capitol.

It boggles the mind that these Republican senators would defend this. People died that day, including police officers whom the MAGA followers purport to love, and many others were grievously wounded. This lame "process argument" about the unconstitutionality of the trial, does nothing more than confirm that they will do anything to protect their seats. If they had any integrity or loyalty to their oath, this one would not be a hard call.

I checked in with Fox News to try to get a sense of how the right-wing media is covering Trump's second impeachment trial and it was predictably dismissive.

Tucker Carlson proudly said he didn't watch it and called it a distraction "from something that is actually important" --- such as his apparent belief that the COVID vaccines aren't safe. Sean Hannity called in Donald Trump Jr to rev up the audience to "play hardball" which seems stupendously idiotic in light of what Trump is being impeached for. Perhaps Junior is up for another run at the Capitol? No Fox News viewers saw that 13-minute video during prime time. Across the board, the word to the Trump followers was, "don't worry, Trump did nothing wrong. The Democrats are just persecuting him, as usual." If they haven't ventured beyond their right-wing bubble they do not know what really happened that day.

But the senators were all there. They experienced it personally. They saw that footage and heard the arguments and they have no excuses. Neither does the right-wing media, which continues to perpetuate the MAGA mentality even now that Trump is no longer in office. I suppose it's too much to expect any of them to speak truth to power. But you might have thought more than a small handful would summon the guts to speak truth to someone who no longer has any. As Trump would say: "Sad!"