In May 1803 a group of enslaved Africans from present-day Nigeria, of Ebo or Igbo descent, leaped from a single-masted ship into Dunbar Creek off St. Simons Island in Georgia. A slave agent concluded that the Africans drowned and died in an apparent mass suicide. But oral traditions would go on to claim that the Eboes either flew or walked over water back to Africa.

For generations, island residents, known as the Gullah-Geechee people, passed down the tale. When folklorists arrived in the 1930s, Igbo Landing and the story of the flying African assumed a mythological place in African American culture.

Though the site carries no bronze plaque and remains unmarked on tourist maps, it has become a symbol of the traumatizing legacy of trans-Atlantic slavery. Poets, artists, filmmakers, jazz musicians, griots, novelists such as Toni Morrison and pop stars like Beyoncé have all told versions of the tale.

They'll often switch up the story's details to reflect different times and places. Yet the heart of the original tale, one of longing for freedom, beats through each of these retellings. The stories continue to resonate because those yearnings – whether they're from the cargo hold of a sloop or the confines of a prison cell – remain just as intense today.

As an academic trained in literary history, I always look for the reasons behind a story's origins, and how stories travel or change over time. Variations of the flying African myth have been recorded from Arkansas to Canada, Cuba and Brazil.

Yet even as the many versions cut across the Black diaspora, the legend has coalesced around a single place: St. Simons. An entry in the Georgia Encyclopedia makes a direct correlation between the 1803 rebellion mass suicide and the later, literary folkloric tradition.

Why? One reason is geographic.

St. Simons, part of the archipelago that stretches from Florida to North Carolina, long remained separate from the mainland United States. This isolation allowed African customs to survive, where elsewhere they were assimilated or vanished. Historian Melissa L. Cooper describes the Gullah-Geechee people as cultural conservators, tasked in popular culture with the duties of preservation. 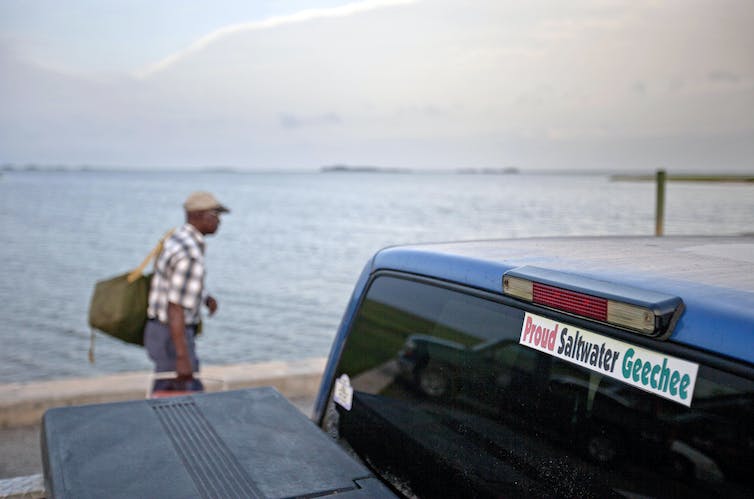 The Gullah-Geechee are descendants of enslaved people who reside on the Southeast coast of the U.S.

Serendipity also played a role in siting the story. When a causeway from mainland Brunswick to St. Simons was built in 1924, folklorists literally followed a paved route into the past. During the New Deal, the Works Project Administration funded an oral history project that involved interviewing formerly enslaved people, and the flying African story was recorded in “Drums and Shadows," the classic volume that published interviews from the project.

They “staht singing and de mahch right down in duh ribbuh" – Dunbar Creek – and “mahch back tuh Africa." But they never get home, White adds: “Dey gits drown."

Floyd White is a key source on the flying African, though as the hackneyed written transcription of his interview suggests, questions linger. The Ebos, by his account, walk, rather than fly, across the water. White allows that he does not personally believe the myth; he says they drowned.

The flying African, despite a genealogy rooted in St. Simons, has no single point of origin. A shifting present continues to rewrite the past. These differences across versions only underscore the strength of the myth's central core.

Take how music is used. In almost every account of Igbo Landing, the Africans sing before they fly. They chant in a dialect of Bantu, one of Africa's 500 languages: “Kum buba yali kum buba tambe, / Kum kunka yalki kum kunka tambe." Those words don't have a direct translation; the words, more often, get described as secret, magical or lost.

But since the 1960s, in many retellings, the Bantu has been updated to the hymn “Oh Freedom," an anthem first recorded after the Civil War and later popularized during the civil rights movement.

The storyteller Auntie Zya recounts the Igbo Landing legend in a YouTube post. To make the tale more relevant to children today, she launches into the familiar refrain, “And before I'd be a slave," using the hymn to bridge the myth and a long struggle for civil rights.

And then there's Toni Morrison's novel “Song of Solomon," the very title of which links music and flight. In the story, the novel's main character, Milkman Dead, pieces together mysterious lyrics to recover a hidden past. Once he understands the song, he leaps from a Virginia cliff and flies away. Or is it suicide? The ending is famously ambiguous.

Toni Morrison talks about how, as a child, she was inspired by stories of enslaved African people flying home to their freedom.

Like all powerful myths, Igbo Landing and the flying African transcend boundaries of time and space.

Experimental filmmaker Sophia Nahli Allison perceives memories from Dunbar Creek as an “ancestral map." In a poetic narrative she lays over a dance montage, she muses: “Dreams are reality, time is relative, and the past, present, and future are melding together." Allison suggests that the cross-generational continuity of the myth nurtures her, sustaining her voice through centuries of violence.

Children's author Virginia Hamilton, likewise, offers the flying African as a script for healing. Her most famous story, “The People Could Fly," broaches the difficult subject of the Middle Passage, the leg of the slave trade in which Africans, tightly packed in slave ships, were transported across the Atlantic Ocean.

[You're smart and curious about the world. So are The Conversation's authors and editors. You can read us daily by subscribing to our newsletter.]

Hamilton explains why some Africans had to leave their wings behind when forced to America. “They couldn't take their wings across the water on the slave ships," she writes. “Too crowded, don't you know."

How does a culture get those wings back?

Where some storytellers linger over haunting images, such as the chains supposedly still heard in Dunbar Creek, artists such as Morrison, Allison and Hamilton look forward. Their stories lay the groundwork for recovery.

Hamilton presents “The People Could Fly" as a direct form of hope. In a preface to her collection of that title, she explains how tales “created out of sorrow" carry Black America forward. She reminds readers: “Keep close all the past that was good, and that remains full of promise." A painful past must be summoned in order to be redeemed.

Igbo Landing starkly illustrated, in 1803, how the choice between slavery and death was not a choice at all. Slavery, sociologist Orlando Patterson wrote, was also social death.

But it's important to remember that joy doubles as a form of decolonization. Music threads through every version of the flying African legend. Magic words propel fieldworkers into the sky, “Kum yali kum buba tambe." In song, our spirits lift.

And who among us does not dream of flight?