We can't just ignore the evangelicals 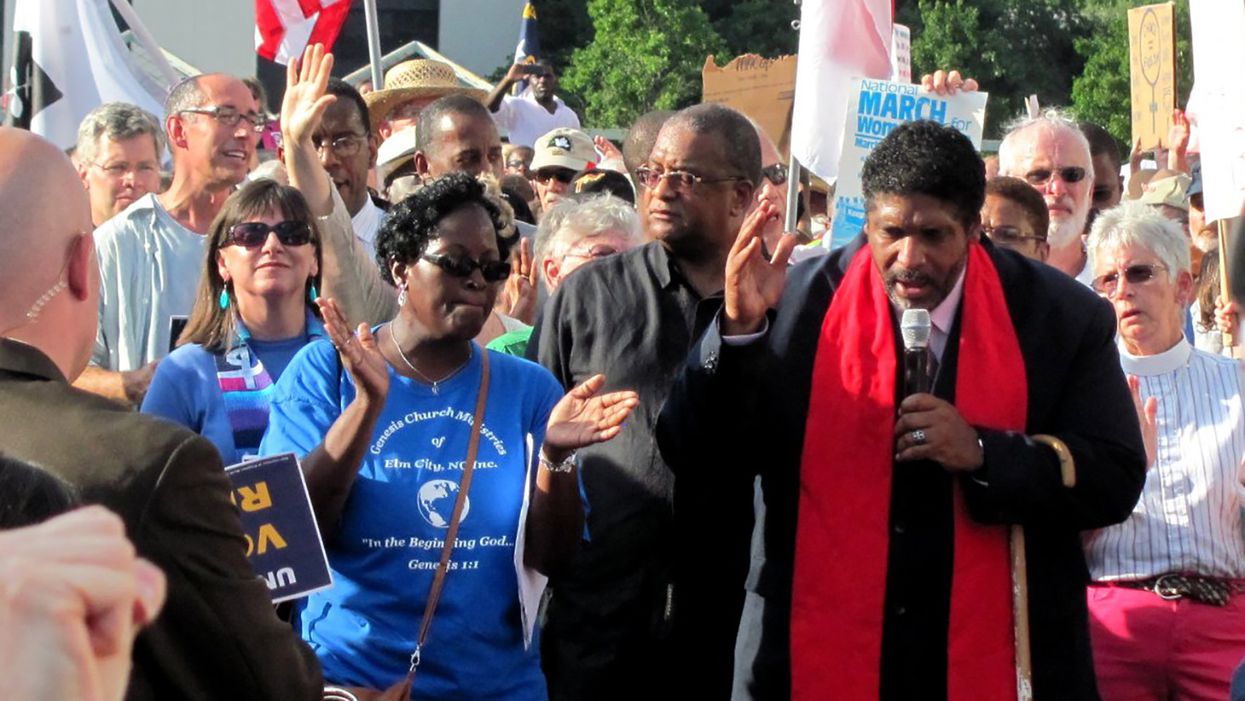 William Barber at Moral Mondays rally, Flickr
Evangelical Christians are on the left, too
Nathaniel Manderson
and
Salon
February 21, 2021

It is difficult to carry a message like mine, one that doesn't have a real audience. As a Bible-believing liberal, I lose the liberals with the whole "Bible believing" thing, and I lose the Bible believers with the whole "liberal" thing. At times I feel like the only person in America with this perspective. I am not into converting anyone, either: Each individual's faith journey is their own. I am also not sure I can change the hearts of many of the followers of the evangelical movement, so that is also not my goal. I do believe, firmly, that for this country to progress it needs true liberal progressives in positions of power and influence for a long time. This will not happen if people overlook or underestimate the power of these Christian nationalists. Secondly, I see a clear way to stop this evangelical political nationalist movement.

The first reason is that they have lots and lots of resources: Think tanks in Washington, massive "nonprofit" ministries that bring in millions of dollars, Fox News, Newsmax, QAnon, talk radio, all their current politicians in office, plus one crazy ex-president.

I understand the temptation to just move ahead without facing down the evangelicals, but recent history suggests it is a mistake. Two recent presidential candidates who struggled to connect to the evangelicals were Hilary Clinton and John Kerry. Both had incredible résumés and were much more qualified than the people they were running against, but the evangelicals greatly favored George W. Bush and, more recently, Donald Trump.

During the Bush campaign Karl Rove put together a state-by-state push to get evangelical issues on state ballots to motivate the evangelical votes in various swing states. At the time Bush's approval ratings were terrible, the economy was a disaster, and the country was stuck in a war that many Americans disapproved of — yet the evangelicals bridged that gap and gave Bush four more years. The story around Clinton losing to Trump is well documented, and the fact that at least 80% of evangelicals voted for Trump is well known.

These political victories for lesser candidates were not accidents. The evangelical movement is well financed and has far-reaching influence. All the recent activity since Trump lost the 2020 election has only emboldened them further. The evangelical leadership, because of its vast network, is funding political campaigns, news networks and legal defense teams for Trump — through an organization called the American Center for Law and Justice — in a never-ending push to overturn Roe v. Wade and create some form of Christian theocracy. Ignore them at your political peril.

The second reason is that the evangelical message of returning America to traditional Christian values connects with millions of voters. Anytime people talk about the "good ol' days" and how evil the world is now, that connects. No one is better at that then these evangelicals. We're all guilty of this a bit, by the way. I am 44, and I hate how things are right now. It's a world where Bruce Springsteen is selling cars and Bob Dylan sells lingerie, and every actor, musician and athlete is a brand to themselves. The movies all look the same, the music all sounds the same and millennials drive me nuts. It's a tempting message, and they know how to communicate it.

Change does not come easy to anyone. I have seen this in my ministry and my educational career, and perhaps more so in my work in the trades. Anyone who has ever had a job for a while, only to see some new idea come out at their company or school has had this experience. People resist. I know I do. Furthermore, people tend to remember the way things were in a much better light than the way things are. Evangelicals tap into this tendency brilliantly, and make the same kind of connection in talking about America. Any information that threatens this false version of American history and the connection to God is seen as coming from an enemy.

Many of the messages I hear on evangelical radio talk about biblical societies that turned their backs on God, and felt God's wrath soon afterwards. There is a clear and obvious warning that America has done just that. They certainly do not mention that America's relationship with Christian values is complicated, to say the least The facts and the real history does not matter: The fantasy of the way things were is what works works. As I suggested earlier, this kind of message works on most people. People fantasize about how things were in past relationships, in old work situations, in almost everything. So the evangelical leadership and the politicians they support tap into this human desire to bring back the good times.

Two ways to stop the evangelicals and break their political power

First of all, we must call out their leaders — the evangelical leadership care only about wealth, power and proving their own righteousness. It needs to be shouted from the rooftops that they selected issues that raised money and kept them in positions of power and influence. They are the very religious hypocrites that Christ himself warned his followers about.

Calling these leaders out is easy, but convincing their followers that their leaders are conmen has proven to be difficult. I go biblical here, which is hard for my fellow liberals. Many of the liberals I know have put aside their faith for some solid reasons. For some it's about rejecting the experiences they had in church as kids, and for some it's simply a matter of choice to reject all this God stuff. I get that. Believing in God is no joke: An old guy in the sky with rules, heaven and hell, and a son on the cross dying for our sins. It is a big leap.

But this lack of faith means that evangelical leaders are easily able to dismiss liberals' arguments. That's why I go biblical on these evangelical hypocrites. The Bible is a problem for these guys in many ways. My best argument lies in two places in the book of Matthew, the first of those being the only time Jesus loses his cool. The religious leaders of Christ's time had turned God's house into a den of robbers and thieves, and this is the case again. I cannot get through five minutes of listening to some evangelical minister without them selling me their books or asking for a donation. Most followers notice this and question it in their hearts, so it's time to announce that these evangelicals are nothing short of the robbers and thieves that Christ confronted.

The other passage from Matthew is a sermon by Christ warning about religious hypocrites. The basic gist is about religious leaders obsessing over how they must appear to the public as holy and righteous. The outside of their cups are clean but inside they are full of all kinds of evil. Remind you of anyone? This is how we take away some of the political power of the evangelical leaders. They are a poison in the veins of this country, and their own savior condemned them more than 2,000 years ago.

The second thing we need to do is address the concerns of the evangelical followers. These people, in real life, don't care what happens with the LGBTQ population and, believe it or not, don't care much about abortion. They mostly care about their own families and their ability to take care of them. This is where the connection can come in.

I know it sounds wrong-headed to believe that the followers of these evangelicals are concerned about anything besides issues around Christian "liberty," abortion and gay rights, but I promise that in their heart of hearts they do not care about anything but taking care of their own family and finding a job that gives them value. It is hard to see through all the embarrassing behavior of the evangelical movement to find something worth addressing, but it's there.

I am not denying that much of the reason they follow Trump reveals some serious ignorance around race, women's rights and immigration. I am not saying that we all need to be friends. But it is important to understand the core of what many people from the blue collar working-class poor need, of all races and faiths. They want to be heard, valued and even loved. Reaching them is simply a matter of talking to them. That is all the evangelical leadership has ever done. They've never truly done anything for them truly and neither have the politicians they support, but they gave the blue-collar evangelicals love and a sense of value. That goes a long way.

Liberals can give them the same thing but actually offer them the real progress that can come from supporting leaders who will pursue policies that actually benefit the working class. Understand that to ignore this group sends this country down a path of bitter division. Just focus on the economic disparity that so clearly exists in this country. Finding common ground on core issues like that has been the basis of all progress in this country. Every great leader in the past 200 years has understood the need to find common ground and we should do likewise.

America's issues around religion, politics, power and oppression are not going away anytime soon. But perhaps for a little while the better angels of our nature can lead this nation away from the selfishness and greed that have driven it for so long. In this moment I choose to focus on one key article of faith: Theocracy is never a good idea.