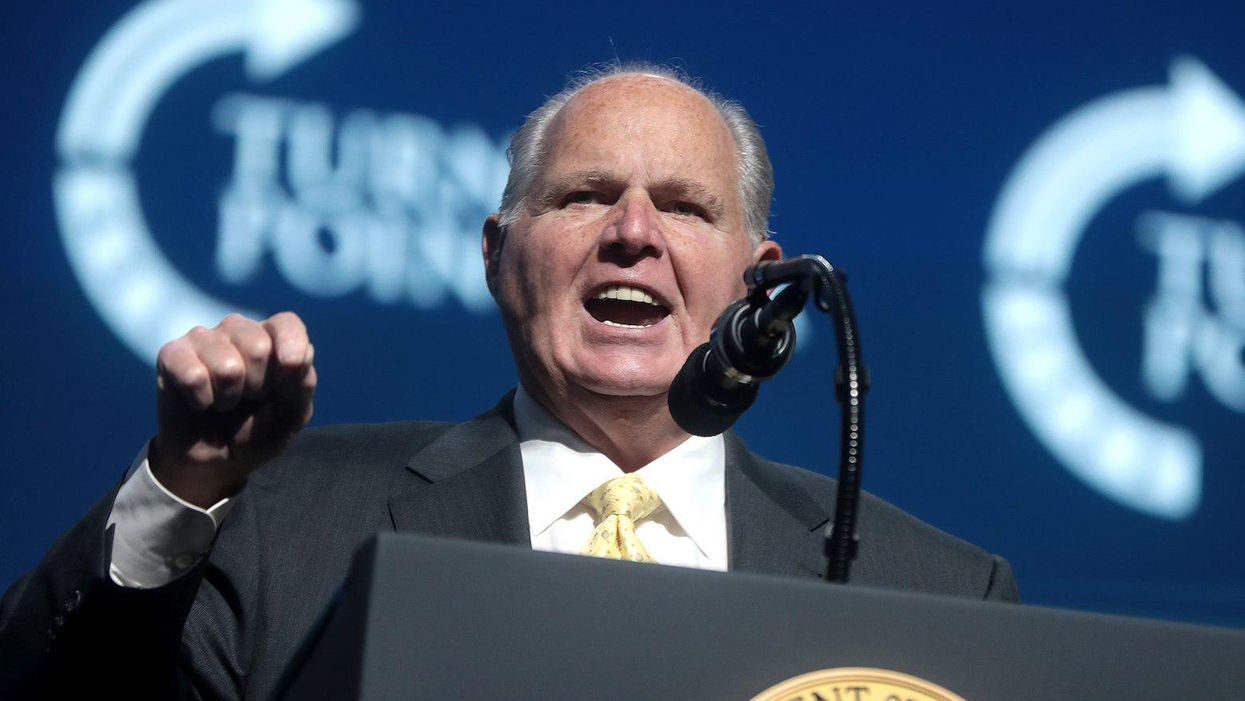 Rich Lowry, the editor of the right wing website National Review, thinks liberals should take another look at Rush Limbaugh before passing judgment on his life, now that the 70-year old purveyor of hate has died.

Lowry, a frequent guest on NBC News' "Meet the Press," in 2019 wrote The Case for Nationalism: How It Made Us Powerful, United, and Free. The book has been panned by knowledgable critics. A Washington Post review said it was "urging Republicans to embrace Trump's worldview and 'thoughtfully integrate his nationalism into the party's orthodoxy.'" Donald Trump has been called a racist, a supporter of white nationalism by some, and a white supremacist by some others.

So has Rush Limbaugh.

But to Lowry, Limbaugh deserves to been seen in his entirety, so, racism, white nationalism, and white supremacism sandwiched between laugh lines, apparently. Along with heaping servings of misogyny, homophobia, transphobia, Islamophobia, and other hateful beliefs.

"Liberals who didn't listen to Rush, and just read the Media Matters accounts, never understood how *funny* he was," Lowry tweeted Wednesday afternoon. "What set him off from his many imitators was how wildly entertaining he was, and the absolutely unbreakable bond he formed with his listeners."

His remarks were not well-accepted.

Oh sure. Nothing like a boatload of racism, bigotry, and hate delivered in a "wildly entertaining" way. 🙄
— Barbara Morrill (@BarbinMD) February 17, 2021

Remember when he told that Black caller to "take the bone out of his nose" or when he created the "Barack the Magic Negro" skit? Pretty hilarious stuff.
To racists. — (((RuggedAmethyst))) (@GrooveSDC) February 17, 2021

Sure, it was hilarious when he would gleefully announce the names of people who died from AIDS. That was a fucking laugh riot.
— Amy Vernon 💙🇺🇸🏳️🌈💙 (@AmyVernon) February 17, 2021

Rich Lowry has a hell of a nerve calling Limbaugh "funny" and "generous" when Limbaugh made a living off casual misogyny and proud ignorance about women.
— Your Snitty Valentine (@clofwhoville) February 17, 2021

I listened to Rush Limbaugh nonstop for years. He taught me that in order to be funny someone had to be cruel. So I allowed cruelty passed off as "just a joke" into my life for years.
He was a monstrous human being. https://t.co/okX33jlkS0 — Mary Michael (@MsMaryMichael) February 17, 2021

Comedy fan here. Can you explain the joke where he would laugh at gay people who had died of AIDS?
— Jason O. Gilbert (@gilbertjasono) February 17, 2021

Ha ha haa... remember that zoo crew segment where he mocked dead AIDS victims every day to the delight of mouth-breathing scumbags everywhere? I sure as fuck do. https://t.co/YW9HRcZKE7
— Dennis Perkins (@DennisPerkins5) February 17, 2021

My first experience with Rush in the 80's was listening to his "Aids Update" where he'd name people who died from AIDS and celebrate it with some whistles and bells.
I didn't find it as funny as Rich apparently did. — Beta Ray Ben (@ScienceOfficerB) February 17, 2021

I listened to him from time to time. Limbaugh spewed hate, lies, and divisiveness every day, supplying kindling for the fire that finally burst into flames on Jan 6 - and you think he was "entertaining"?
So, I guess a bloody insurrection is your idea of a good time. — Michael Taylor (@hollywoodjuicer) February 17, 2021

OMG There was nothing funny about him calling Nancy Pelosi a terrorist, or women “feminazis"
Just stop sanitizing the man who taught America to hate. https://t.co/tw2pSJsrMM — Karoli 🇺🇸 (@Karoli) February 17, 2021