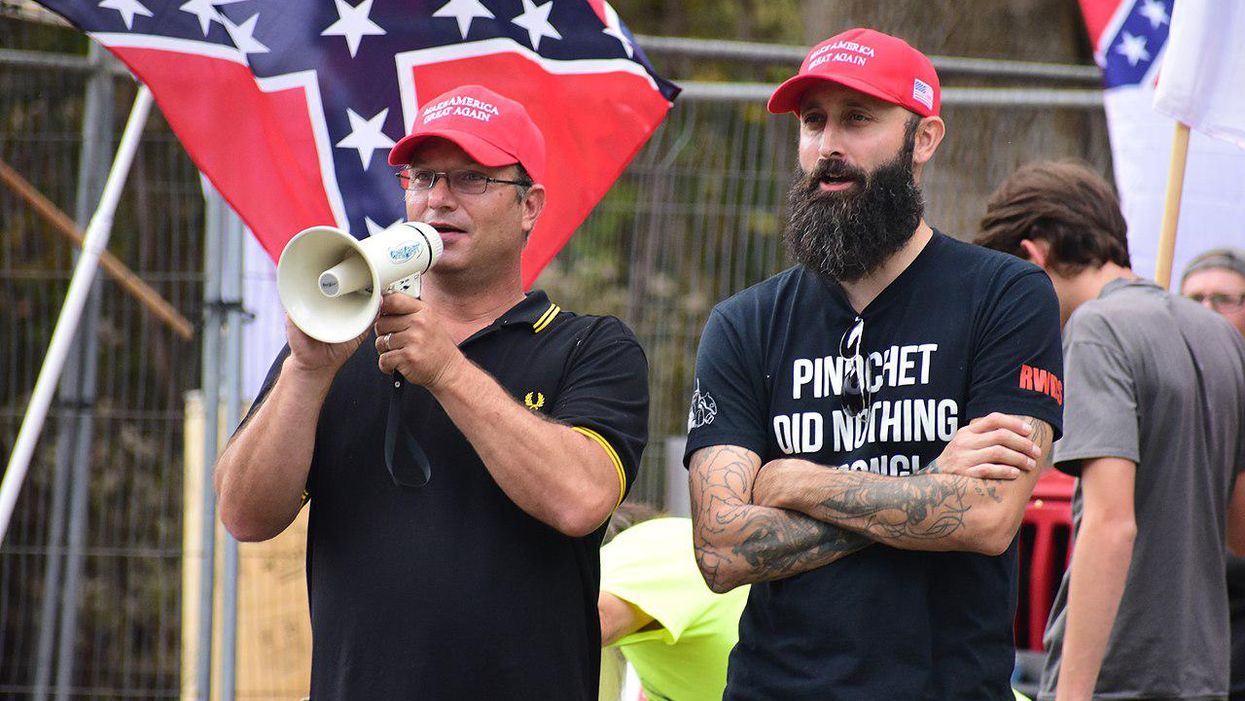 The attempted Republican coup against our democracy is not over. It is changing form, now that Joe Biden has been formally sworn in as the nation's new president, but not abating. State Republican parties, in particular, are continuing to aggressively embrace the hoaxes, conspiracy theories and cult notions justifying the attempted violent insurrection to reinstall Donald Trump as an illegitimate leader. They are also retaliating against those Republicans who refused to abet those efforts.

Long a extremist hub, the Arizona Republican Party has been moving the swiftest to dole out consequences to anti-fascist Republicans. The party voted yesterday to censure Cindy McCain, Gov. Doug Ducey and ex-Sen. Jeff Flake, while reelecting far-right crackpot Kelli Ward as their state party leader. (All three censured Arizonans attended Joe Biden's inauguration just days before in a show of support for our continuing democracy, which may or may not be coincidental.)

Ducey was condemned for his imposition of pandemic-battling restrictions, as the party continues its obsessions with anti-science, anti-book-learning contrarianism even as the pandemic death toll inches towards a half million souls. McCain, however, was called out not only for her insufficient Trump support but for supporting "globalist policies," a reference to the anti-Semitic conspiracy theory supposing that global "elites" are working behind the scenes to undermine national identity. To her credit, McCain responded by telling her state party to pound sand.

Lurching farther rightward still, the Texas Republican Party encouraged its allies to travel to neo-Nazi friendly site Gab while identifying itself with a pro-"Q" conspiracy trope.

After 2016, there was an avalanche of punditry about what Democrats needed to do to rebuild their party — mainly, e… https://t.co/ARCdePG4jU
— Matt McDermott (@Matt McDermott)1611496999.0

"We are the STORM" is, if the symbolism did not give it away already, a Q-ism borrowed directly from the neo-Nazi movement. The "storm" refers to a violent revolution to murder the enemies of the far-right, from antifa to Democratic and social leaders to insufficiently pure neighbors, under the premise that those enemies are secretly murdering children to harvest their blood. Once again, it is the thinnest possible veneer on fringe-right anti-Semitic conspiracy theories that have animated neo-Nazi justifications for violence since before they were neo-.

Donald Trump may be gone, left to stew for the moment on his loss and whether he truly wants to form a new far-right party or simply blow it off and go golfing, but the party that chose him as its incompetent, dishonest, blustering, and criminal figurehead has, if anything, only solidified its embrace of fascist techniques and principles. They are redoubling their efforts to radicalize their base, battle truths with hoaxes and to further impede the ability of non-white, non-conservative Americans to cast votes at all.

That they are doing so even after stoking a genuine violent insurrection is not surprising; the intent of the hoaxes to begin with was to overturn the election by any means necessary through the promulgation of hoaxes intended to so inflame the base that the citizenry itself would rise up to demand it. It remains the intent now. Violence is not a side effect of these efforts, but a tool. They will use it when they can.