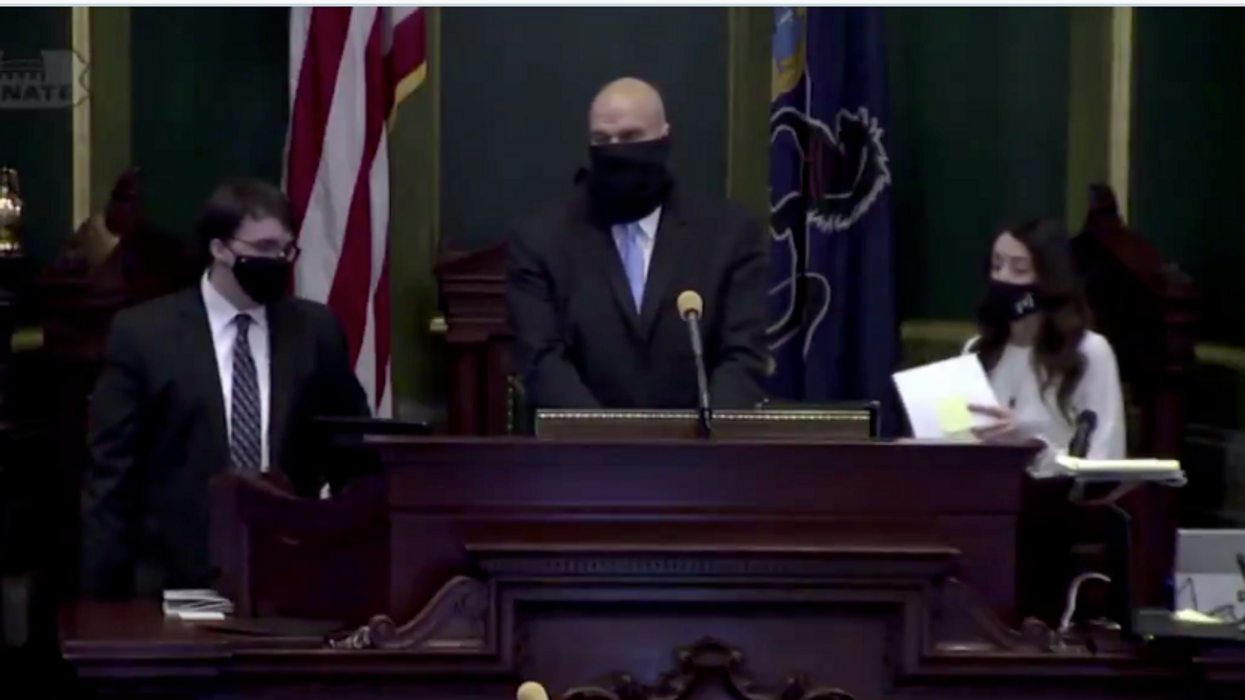 The Pennsylvania state Senate was thrown into chaos Tuesday after Republican lawmakers refused to seat a certified Democratic winner of November's election and removed the lieutenant governor presiding over the session.

The Harrisburg Patriot-News reports the raucous Senate session began with a pair of Republicans refusing to wear face masks, which prompted passage of a temporary rule proposed by Democrats compelling all legislators to don face coverings to protect against the spread of the coronavirus.

With that out of the way, GOP senators then blocked the seating of 45th District Democratic incumbent Sen. Jim Brewster (McKeesport), who according to certified election results, defeated Republican challenger Nicole Ziccarelli by 69 votes—citing the latter's legal challenge of the results.

This is moments before @FettermanLt was removed from rostrum as Senate GOP blocked swearing in of Sen. Brewster who… https://t.co/cd5zfsCFnq
— Jamie Bittner (@Jamie Bittner)1609877785.0

Here's more of the fiery moments as @FettermanLt was removed from rostrum as Senate GOP blocked swearing in Sen. B… https://t.co/gpMppDEFKO
— Jamie Bittner (@Jamie Bittner)1609882195.0

Senate Minority Leader Jay Costa (D-Allegheny) called the Republican move "unlawful" and suggested that Democrats might contest it in court. Costa accused his Republicans colleagues of trying to "steal an election" in what he argued was as a continuation of "the Trump playbook," a referral to President Donald Trump's ongoing refusal to concede defeat to President-elect Joe Biden.

There were more fireworks. In addition to blocking Brewster, Republican senators also voted to take the rare step of removing Democratic Lt. Gov. John Fetterman from presiding over the session, claiming he was not properly following Senate rules.

"I was escorted out," Fetterman told the New York Times minutes after his expulsion. "This was a corruption of the fundamental democratic franchise in our state."

The drama was far from over. After Fetterman's ouster, all but two Democratic senators refused to back Sen. Jake Corman (R-Centre) from being elected president pro tempore, a position that is second in the line of state succession to Gov. Tom Wolf.

Wolf, a Democrat, weighed in on the controversy Tuesday, issuing a statement saying, "Republicans in Pennsylvania and nationally have spread disinformation and used it to subvert the democratic process."

"Sen. Jim Brewster rightfully won the 45th Senate District, but Senate Republicans are ignoring the voters in the district and refusing to swear him in as senator," asserted Wolf. "This is a shameful power grab that disgraces the institution."

Here's @SenatorBrewster, the man @ center of the PA Senate controversy today. His election has been certified but c… https://t.co/AJaYimhpuF
— Jamie Bittner (@Jamie Bittner)1609884026.0

Wolf said it was "unethical and undemocratic to leave the district without a voice simply because the Republicans don't like the outcome of the election."

"Voters, not Harrisburg politicians, decided this election, and Sen. Brewster is the rightful winner," Wolf insisted. "All ballots were counted and certified, and the results are accurate. Sen. Brewster received the most votes in this race and should be sworn in as the senator for the 45th District. There is no precedent, and no legal rationale, for failing to do so."