'The enemy is within': Democrats are increasingly alarmed at the threat posed by GOP lawmakers 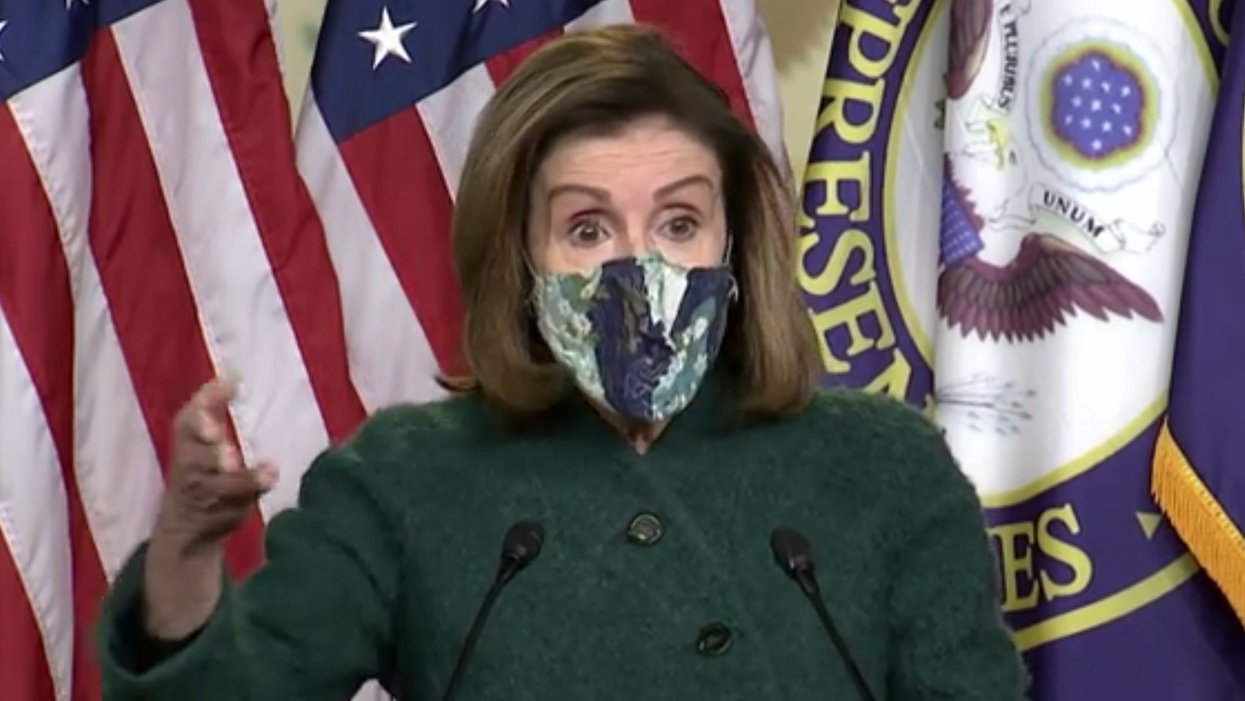 House Speaker Nancy Pelosi gave chilling remarks on Thursday during her briefing with the press.

"The enemy is within the House of Representatives," she said.

She indicated that Congress will likely need to fund more security services for its members, given the threat posed.

"It shouldn't be that not only is the president of the United States inciting and insurrection but keeps fanning the flames, endangering the security of members of Congress, to the point where they're even concerned about members of Congress being a danger to them," she said.

She didn't specify who she was talking about, but she may have been referring to Republican Rep. Majorie Taylor Greene of Georgia. CNN recently reported that Greene "repeatedly indicated support for executing prominent Democratic politicians in 2018 and 2019 before being elected to Congress."

Among those she targeted was Pelosi herself. Greene once "liked" a Facebook post saying Pelosi should get a "bullet in the head" and accused the speaker of "treason," which she emphasized was punishable by execution. She also reportedly said in 2019 that Pelosi will "suffer death or she'll be in prison." CNN noted that Greene seemed to consistently omit any reference to a trial.

Instead of apologizing for these comments, Greene lashed out at "Fake News CNN" and called the article a "hit piece on me focused on my time before running for political office." Media Matters also recently reported that in 2018, Greene posted a bizarre conspiracy theory suggesting that a space laser was the cause of California wildfires, events she linked to Rothschild & Co, a frequent subject of anti-Semitic fictions.

Others have criticized GOP Rep. Lauren Boebert of Colorado, who stoked the flames ahead of the Jan. 6 Capitol riot, declaring that it was "1776," a common citation for the insurrectionists. During the attack itself, Boebert tweeted out the fact that Pelosi had been removed from the chamber, which many argued could have endangered the speaker. Boebert has also insisted that she wants to carry her gun on Capitol Hill.

Democratic Rep. Jimmy Gomez of California is pushing to have Greene removed from Congress, a longshot gambit, citing the her threatening language. He appeared on MSNBC Thursday night with Chris Hayes, arguing that the threat posed by Greene and others on Congress is real, and that Democrats are taking concrete steps to protect themselves.

"This is a serious moment," he said. "Marjorie Taylor Greene, a conspiracy theorist, believes in all sorts of crazy things. But the worst thing is that she's incited crowds in the past to storm the Capitol, to go after Nancy Pelosi. They were chanting 'hang Mike Pence.' And now she's still a member of Congress. So I believe she is a clear and present danger to the members of the House of Representatives just simply for the fact that she's also able to bring a gun to the House office buildings, and she has walked around the metal detectors going to the House floor. There's a strong sense that something worse than Jan. 6 could happen if she continues in office."

Pressed on how serious he was about his fears, Gomez said: "When members are buying bulletproof vests, and getting fitted, across the Democratic Congress, when people are looking at new security measures for their homes, including myself, yes, this is serious. People are deeply concerned. If she said, 'OK, I'm not going to bring my gun to the floor or to the House,' yeah, people would feel better. But that doesn't mean that she can't incite someone."

Democratic Rep. Alexandria Ocasio-Cortez of New York similarly expressed outrage and concern for her own safety in tweets to Texas Republican Ted Cruz on Thursday. She called him out for his role in stoking the bogus stolen election claims that preceded the Capitol attack.

I am happy to work with Republicans on this issue where there's common ground, but you almost had me murdered 3 weeks ago so you can sit this one out.

Happy to work w/ almost any other GOP that aren't trying to get me killed.

In the meantime if you want to help, you can resign. https://t.co/4mVREbaqqm
— Alexandria Ocasio-Cortez (@AOC) January 28, 2021