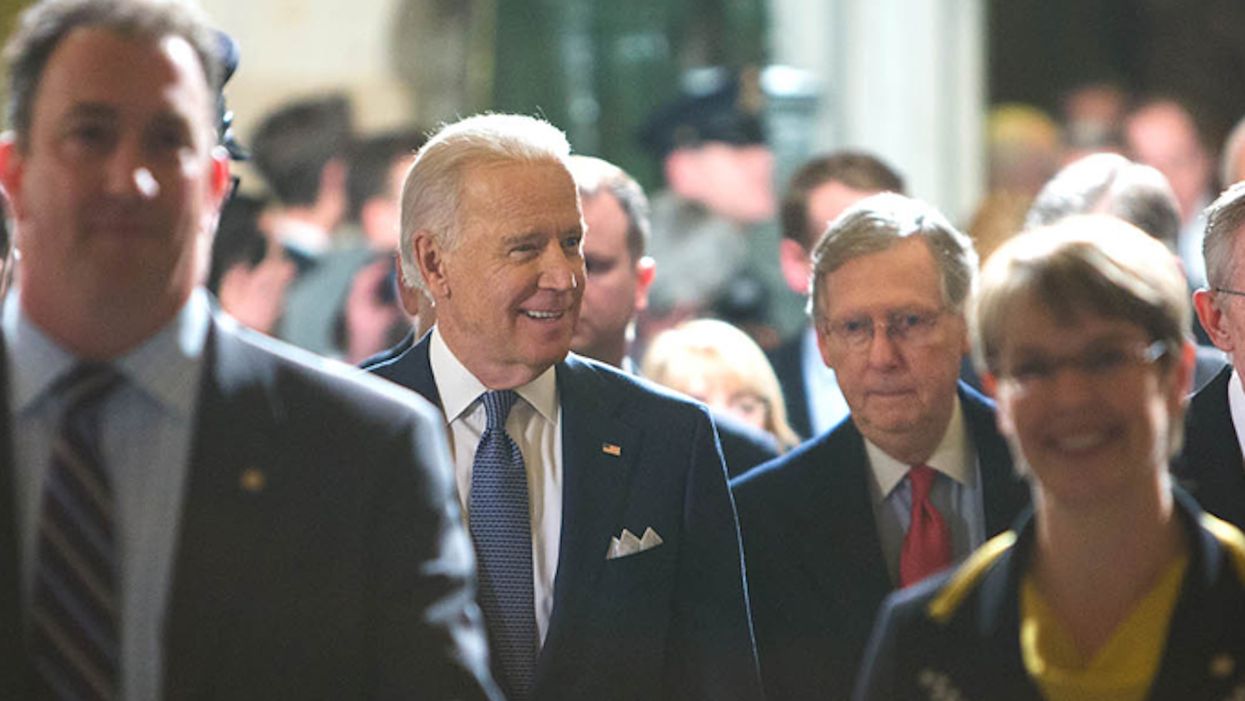 Vice President Joe Biden walks from the Senate side to the House Side, with Senators Harry Reid, Mitch McConnell, and Dick Durbin, before the State of the Union Address, at the U.S. Capitol in Washington, D.C., Jan. 28, 2014. (Official White House Photo by David Lienemann)
John Stoehr
January 22, 2021

Let's not be naive about American politics. The truth is the Democrats are as self-interested and calculating as the Republicans are. The difference, however, must be said. While the Democrats are as partisan as the Republicans are, their partisanship runs more or less in the direction of democracy and its first and second principles, which are equality and freedom, in that order. If a political party gets what it wants in the pursuit of delivering something most people want most of the time, then so be it. That's not a cynical observation. Instead, it's an observation of a healthy republic.

The same cannot be said of the Republicans. Their interests do not run in the direction of democracy, especially not equality. Freedom is important, but by that, they mean the freedom of the dynastic and monied few to flex power over the many. Democracy is not an objective, because it and its first principle give power, rights and privilege to people who contemporary Republicans do not believe deserve them. Consider the meaning of "special interests." For the Republicans, it's the rich, businesses and corporations, almost always. For the Democrats, it's Black people, LGBTQ, teachers, labor, etc. Both parties are partisan. But only one of them is partisan in the service of most people.

If a party gets what it wants in the pursuit of delivering something most people want most of the time, so be it.

There's nothing morally wrong with being the party of corporate interests. There's nothing wrong, for that matter, with viewing politics as the preserve of the few, not the many. (Democracy does contain multitudes, after all.) What's wrong is lying about it. What's wrong is treating the opposition as if it does not have a legitimate claim. What's wrong is setting off a conflagration of white-power fury that consumes nearly everything, even the republic itself, in order to slake a thirst for power. The day Joe Biden decided to run for president was the day this white-power fury burned through Charlottesville, screaming, "Jews will not replace us." That day, according to published reports, is the day Biden chose to fight to "restore the soul of America."

Maybe he's full of it. Maybe Biden and the Democrats don't really believe what they say when they talk about everyone being in this together. That's certainly what the Republicans and their media allies believe. A critic said Thursday that we can expect to see from Biden "lofty rhetoric about unity, while acting below the radar to smash norms to implement the Left-wing agenda." The same day, a Times reporter asked the White House press secretary why the administration has not offered a bipartisan "fig leaf" to the Republicans, given the president putting so much emphasis on unity. Maybe the Democrats don't mean what they say. Maybe it's just politics-as-usual.

Please. We're all adults here, right? The Democrats are political animals, same as the Republicans. But, again, the difference must be said loud enough for a Times reporter stuck in a bubble of decadence and amorality to hear. While the Democrats are as partisan as the Republicans, their partisanship runs more or less in the direction of democracy and its first principles. Even if they don't mean what they say, the outcomes serve equality and freedom in that order. Even if Press Secretary Jennifer Psaki didn't believe what she said, she was right to suggest that what the Democrats want is what most people want, even Republicans: "Is unemployment insurance an issue that only Democrats in the country want? Do only Democrats want their kids to go back to schools? Do only Democrats want vaccines to be distributed across the country?"

Moreover, the Republicans, because they don't mean what they say, can't be trusted to stand by their demands. Even if, say, the Republicans demanded greater border security in exchange for supporting Biden's immigration reform bill, they'd make up a reason why the Democrats reneged on their commitment in order to renege on theirs. Psaki knows that's precisely what they did to Barack Obama. Better to trust your instincts as to what's best of the country than to trust the Republicans to tell you.