AOC cuts to the point: 'We came close to half of the House nearly dying on Wednesday' 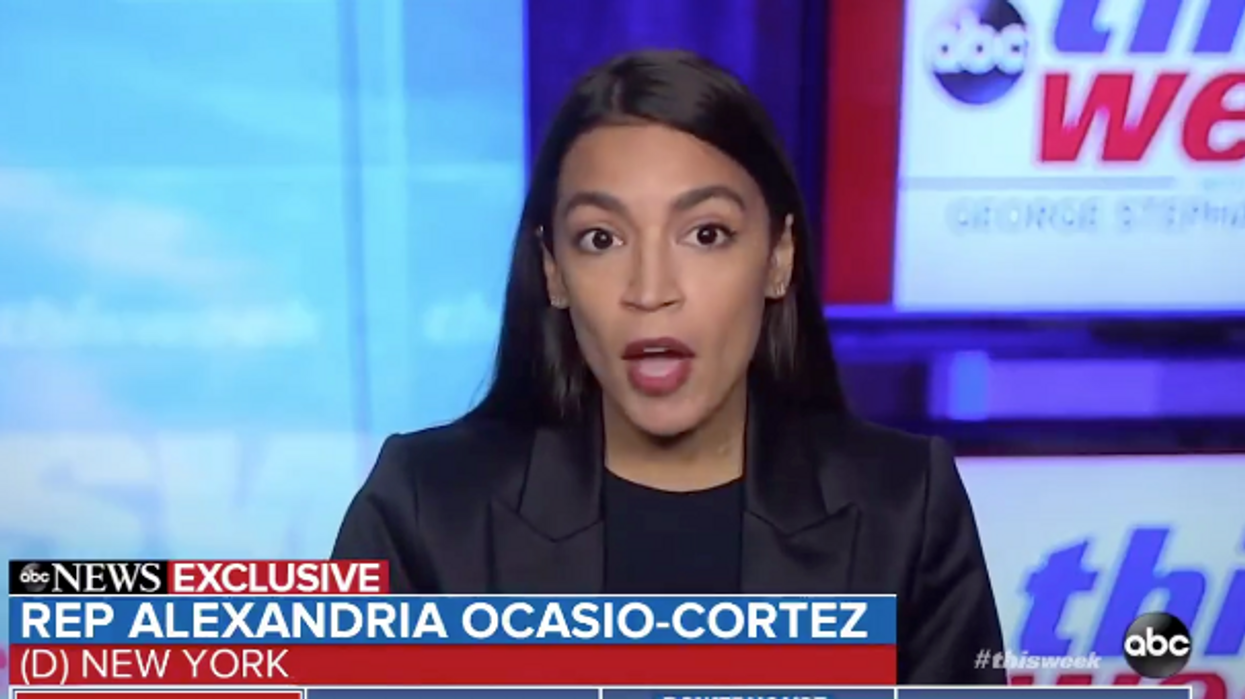 After an incredibly chaotic, exhausting, and, frankly, terrifying week, New York Rep. Alexandria Ocasio-Cortez appeared on ABC's This Week and talked to host George Stephanopoulos about what we all know is true: "Every minute" that Donald Trump sits in office "represents a clear and present danger." As many on social media have pointed out, if Trump can't even be trusted with a Twitter account, how can he be trusted to run the country, hold nuclear codes, or guide us through a global pandemic?

Still, some people are frustrated at the notion of removing Trump so close to the end of his term, wondering, Well, what's the point? There's symbolism, of course, in impeaching Trump for a second time. But there are also real, tangible benefits to removing Trump from office that can affect the country in both the short and long-term. Let's check out how Ocasio-Cortez breaks them down in the clips below.

"Our main priority is to ensure the removal of Donald Trump as President of the United State," Ocasio-Cortez told Stephanopoulos. "Every minute and every that he is in office represents a clear and present danger not just to the United States Congress but to the country. But in addition to removal, we're also talking about completely barring the president—or rather, Donald Trump—from running for office ever again. And in addition to that, the potential ability to prevent pardoning himself from those charges that he was impeached for."

Rep. Alexandria Ocasio-Cortez backs impeachment, telling @GStephanopoulos “every minute" that Trump is "in office r… https://t.co/IpKVlaqaCm
— This Week (@This Week)1610289074.0

Stephanopolous asked Ocasio-Cortez about the concerns of some that having an impeachment trial could slow down getting Biden's agenda underway, including, for example, passing coronavirus relief and confirmations. Ocasio-Cortez argued that the "safety" of the president, Congress, and the "security of our country takes precedence over the timing of nominations" and potential "confirmations."

Asked about some concerns that an impeachment trial in the Senate would delay Biden’s agenda, Rep. Alexandria Ocasi… https://t.co/ls4FDTeaB0
— This Week (@This Week)1610289532.0

Stephanopoulos referenced a letter sent on behalf of a number of Republicans who implored President-elect Biden to forego impeachment for the sake of "unity," arguing that it is "unnecessary" and "inflammatory." The group of House Republicans, led by Colorado Rep. Ken Buck, wrote: "In the spirit of healing and fidelity to our Constitution, we ask that you formally request that Speaker Nancy Pelosi discontinue her efforts to impeach President Donald J. Trump a second time."

To that, Ocasio-Cortez hammered down on the point that what happened this past week was an "insurrection against the United States." The New York City progressive argued that "healing" requires "accountability." She pointed out that if we allow insurrection to happen with impunity, "we are inviting it to happen again."

"We came close to half of the House nearly dying on Wednesday," Ocasio-Cortez stated. "If a foreign head of state, if another head of state, came in and ordered an attack on the United States Congress, would we say that should not be prosecuted? Would we say that there should be absolutely no response to that? No. It is an act of insurrection. It is an act of hostility." She stressed that without accountability, "it will happen again."

Rep. Ocasio-Cortez pushes back against some GOP lawmakers suggesting a second impeachment of Pres. Trump would thre… https://t.co/u3eqeY9k0A
— This Week (@This Week)1610289503.0