Each year, as many as 10 million people travel to the shrine of Our Lady of Guadalupe in Mexico City, in what is believed to be the largest Catholic pilgrimage in the Americas. Due to COVID-19 concerns, the pilgrimage, which is due to take place on Dec. 12, will instead be held online this year.

Normally, multiple pilgrimages take place around this time of the year throughout the country that end at the basilica – a church building specially recognized by the Catholic pope – of Our Lady of Guadalupe, an apparition of the Virgin Mary in Mexico.

In fact, images and statues of her are everywhere in Mexico. She is on altars in people's homes, altars on street corners, posters in mechanic shops and restaurants. Even in the U.S., many Catholic churches with parishioners who have ties to Mexico include a small chapel to her.

The first time I went to Mexico City in 2011 as a Ph.D. student, I visited the shrine to the Virgin. Later, I wrote about her importance in novels, short stories and movies – beyond a religious icon.

This pilgrimage is only one part of Mexican people's connection to the Virgin of Guadalupe.

Apparition of the Virgin

During the pilgrimage in Mexico, people visit the shrine on a hill near where Virgin Mary is said to have appeared to an Aztec man named Juan Diego who had converted to Christianity in 1531.

The legend goes that when Juan Diego told the bishop about it, he demanded proof. Juan Diego then went back to the shrine and the Virgin told him about a place he could pick some roses.

Juan Diego went back to the bishop, with his cloak full of roses. But when the bishop looked at the roses, it is said that an image of the Virgin appeared. In the belief that this was a miraculous occurrence, a shrine to the Virgin was built in Tepeyac in the northern part of Mexico City.

Today, this shrine is part of a large complex which includes several church buildings, a larger-than-life group of statues that portray the Virgin's apparition to Juan Diego and a large space for outdoor Mass, a Catholic worship service.

Over the years, the shrine has undergone changes. A new basilica constructed in 1974 is now used for most services, although the older church constructed in 1709 still stands.

The most important object in the shrine is the miraculous image of the Virgin that appeared on Juan Diego's cloak, which is displayed in front of a moving sidewalk in the new construction.

The story about how the Virgin appeared in Mexico has resemblance to reports of her apparitions in Spain. In the 14th century, the Virgin Mary was said to have appeared to a peasant near the river of Guadalupe in western Spain. The Virgin is believed to have told him to dig up an image of her that had allegedly been buried for several centuries.

Some of those involved in the Spanish conquest, such as Christopher Columbus and Hernán Cortés, reportedly prayed at her shrine in Spain before setting off for the Americas.

When Spaniards colonized the Americas, which included the Aztec empire in central Mexico, in the early 16th century, they brought the image and story of Our Lady of Guadalupe with them.

What is noteworthy is that she is said to have appeared to Juan Diego in the same place where the Nahuatl-speaking Aztecs had worshiped the goddess Tonantzin.

The Spanish colonial administration, together with church officials, encouraged people to replace worshiping Tonantzin in Tepeyac with worshiping the Virgin of Guadalupe in Tepeyac. In this way, they could appear to replace Indigenous beliefs with Catholic ones.

While a church was built on the site in 1556, the Virgin of Guadalupe did not attract a large following until the mid-17th century, when church leaders collected sworn statements regarding miracles she is said to have performed. Her feast day was moved at the time from September to December.

Larger pilgrimages to Tepeyac began in the late 17th century, one of many such pilgrimages in the larger Catholic tradition of thanking a saint or apparition of the Virgin for answering their prayers. 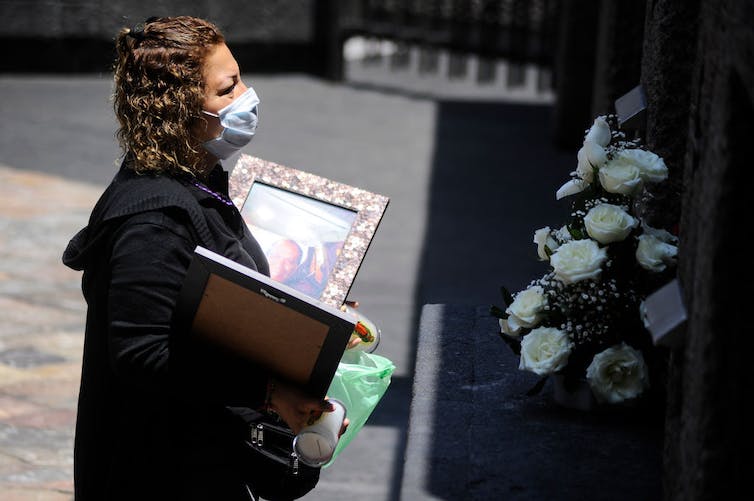 The image of the Virgin of Guadalupe has been used in various ways to create a sense of community.

Over the centuries, her image has been used in various ways to create a sense of community or to advance specific political goals. For example, during Mexico's 19th-century independence movement, Catholic priest Miguel Hidalgo used her image on his banners. In this way, he successfully united many Mexicans in their fight against Spain. Mexicans commemorate this in their Independence Day celebrations each September.

About 40 years later, Catholic Church leaders would use her image to attract Mexican people to their cause, as they fought against the 1857 liberal reforms that encouraged increasing separation of church and state.

[You're smart and curious about the world. So are The Conversation's authors and editors. You can read us daily by subscribing to our newsletter.]

Similarly, in the early 20th century, Mexico's government enacted such strict secularism laws that Catholic bishops suspended Mass for three years. Catholic leaders again used images of the Virgin of Guadalupe on their banners to encourage the soldiers fighting against the anti-Catholic laws.

Today, her image is as varied as the Mexican experience. One of these is the light-skinned child-like “Virgencita plis" on everything from small statues to face masks. It was designed in 2003 by a gift and toy company, Distroller corporation. In this image, the Virgin does not look Mexican and plays to very traditional and often outdated ideas of femininity: innocent, nonthreatening, almost like children. The statue of the Virgin at the basilica of Our Lady of Guadalupe is dark-skinned, physically imposing and has Mexican features.

For each, she has her own meaning and a way of worship. And even if many people are not able to travel to her sanctuary, they will find other ways to honor the Lady of Guadalupe this year.