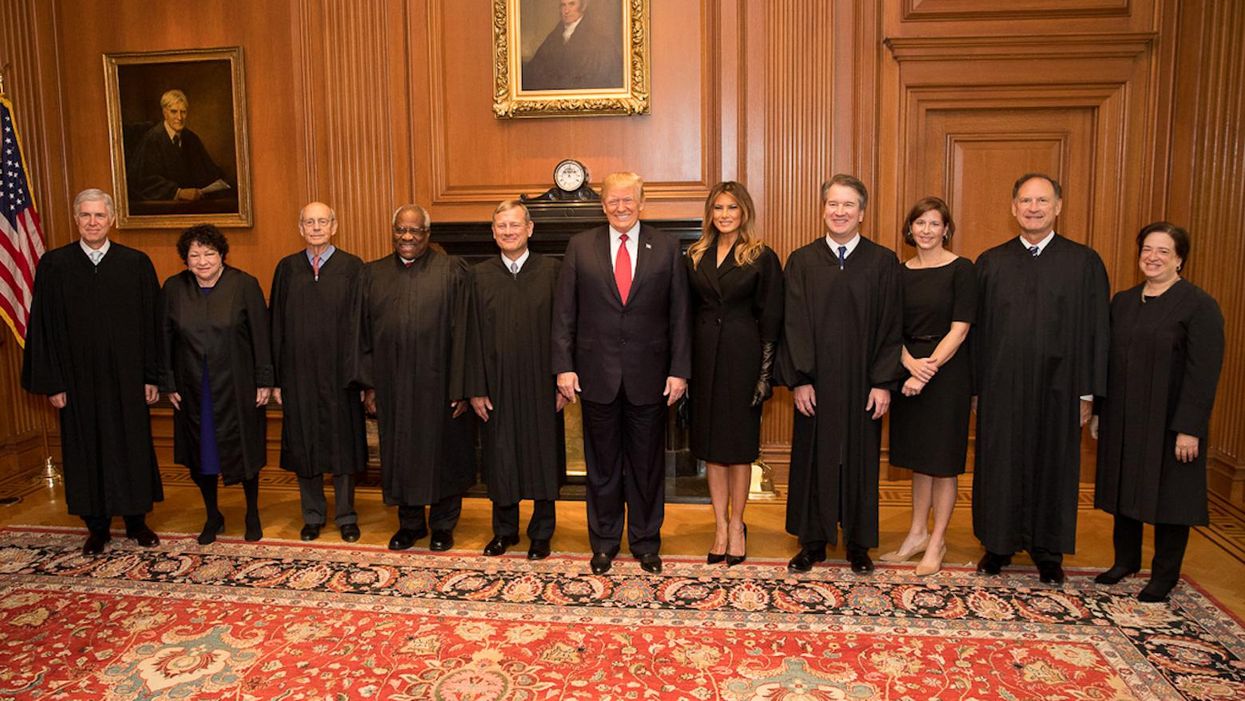 President Donald J. Trump and First Lady Melania Trump participate in a meet and greet with Supreme Court Justices Thursday, November 8, 2018, at the Supreme Court of the United States in Washington, D.C. (Official White House Photo by Shealah Craighead)
The Supreme Court just threw out the election case Trump called 'the big one' in a humiliating blow
Meaghan Ellis
December 12, 2020

While President Donald Trump has insisted the U.S. Supreme Court ruling in his favor would restore trust in the country's election system, the fact that the court ruled against his and top-ranking Republicans' attempt to trample American democracy actually sends another message: no one is above the U.S. Constitution.

But despite Democracy prevailing in court, an editorial published by the New York Times sheds light on a relatively different deeper problem within the Republican Party. The level of support that Trump's coup has received and the actions they've taken to bring his agenda to fruition raises alarming concerns about the future of government and how remnants of Trumpism may remain long after Trump leaves the White House.

Trump's ability to contort the political party for his own personal agenda is one thing but the post-election legal battle suggests that the embattled president may have "pressed a mainstay of American politics for nearly two centuries into the service of overturning an election outcome and assaulting public faith in the electoral system."

"The act itself by the 126 members of the United States House of Representatives, is an affront to the country," said Steele said. "It's an offense to the Constitution and it leaves an indelible stain that will be hard for these 126 members to wipe off their political skin for a long time to come."

Michael Abramowitz, president of the democracy advocation organization, Freedom House, also offered a critical assessment of how Trump's actions compare to other incumbent leaders around the world who go to great lengths to keep a tight grip on their government powers.

"From a global perspective this certainly looks like many of the cases we've seen around the world where an incumbent tries to hold onto power,'' Abramowitz said.

Over the last five weeks, the Trump campaign has filed more than 50 lawsuits contesting the results of the election. As Inauguration Day approaches, it is still unlikely that Trump will accept the outcome of the election. However, Sen. Amy Klobuchar (D-Minn.), who serves as one of the top-ranking members of the Senate Rules Committee, which governs election laws, insists the Supreme Court's decision proves that democracy can survive in the coming weeks.

"Our democracy has withstood Donald Trump for four years," said Klobuchar. "It can withstand these baseless lawsuits for four more weeks."