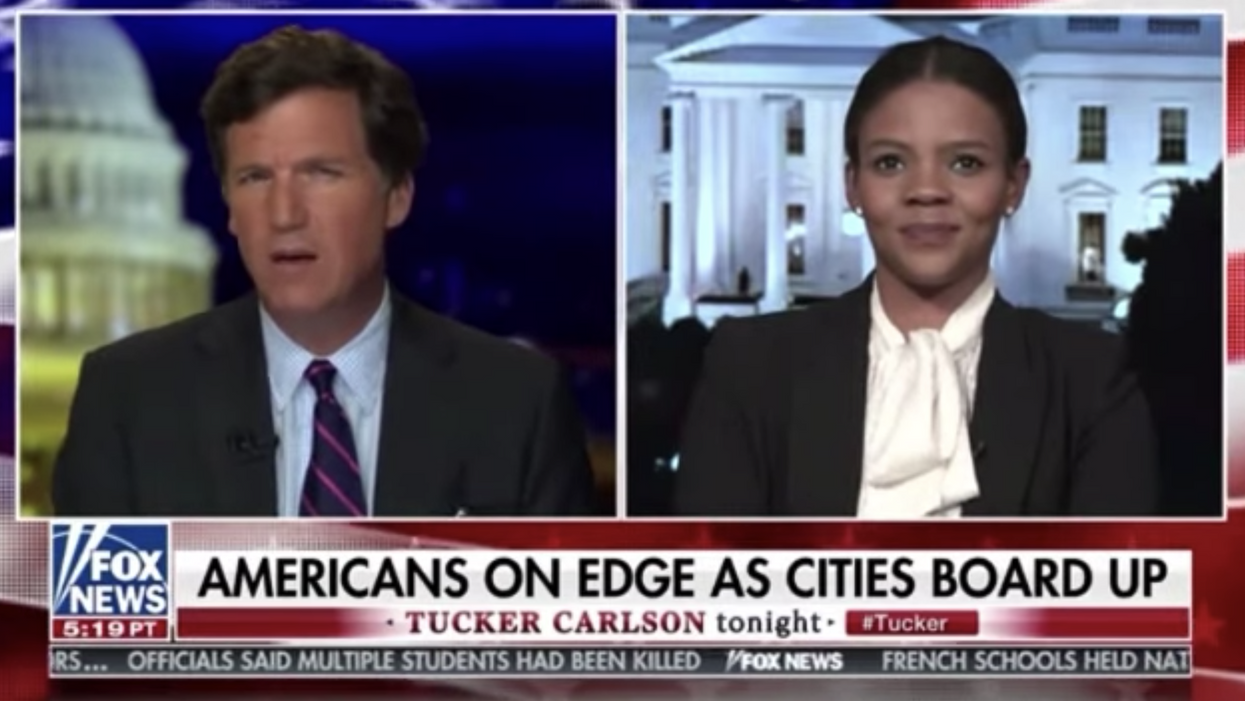 It's an anxious day in America. Trying to twiddle one's thumbs can only take up so much time. We have all been here before about four (thousand?) years ago. Listening to music, doing breathing exercises, drinking, or whatever it is you do once you've voted and are waiting to see what the results of our 2020 election are is a job unto itself. A little levity in the form of Fox News talking point mishaps are in order. On Monday night, the eve of this most important of elections, Tucker Carlson had Candace Owens on to tell Fox News' viewers that they needed to vote for Donald Trump because … well, her use of talking points may have gotten her and Carlson turned around so much that they made a mistake and told the truth, to be honest.

The thrust of Owens' appearance was to say that Black Lives Matter and antifa are coming for you. It's the old "People of color in those cities you see on television are coming for your suburbs and are going to turn your children into … Black people, I guess?" After telling Carlson that Black people were going to vote for Trump because they know he's awesome, Owens went on to make the point that white people in the suburbs should be afraid of Black people and antifa people as they are coming for your homes and will not stop until your children are turned into … socialists, I guess? Maybe looters? Maybe anti-racists? Not exactly sure, but by the tone in her and Carlson's voices, it can't be good.

Of course, after working herself and Carlson up into an unhealthy paranoid and racist froth, Owens forgot to keep the secret thing quiet, and Carlson did too.

CANDACE OWENS: I will say this and I will say this sincerely: To everybody on the left that is okay with this, that is watching these businesses get boarded up, and have turned the other cheek this entire year because you hate Trump so much, let me tell you something: You will get eaten by your own dogs. When we start down this road in America, if you think that we can somehow put the toothpaste back in the tube there will come a time where your own side and you have a disagreement and they're not going to stop.They're going to come for you too, and they're going to move past businesses. They're going to move into the suburbs. They're going to move into homes. Tucker, you know this—you've had antifa show up on your on your doorstep. There is no way to stop this, so you be careful when you think about that, when you head to the polls. You are either on the side of mob rule or you are on the side of law and order, and I am on the side of mob rule: Tomorrow I will be casting my ballot for Donald J. Trump.

To this statement of mob rule fact, Carlson replied: "Amen."

Candace Owen is what happens when your disgust for yourself is only outweighed by your cynicism and determination to punish the rest of the world for your feelings of failure. Because Owens is a Black woman and a conservative cuckoo clock commentator, news outlets and white supremacist propaganda machines like Tucker Carlson enjoy having her on. Her racist perspective on America allows the Fox News' white viewership to feel a little bit better about their own bigotries.