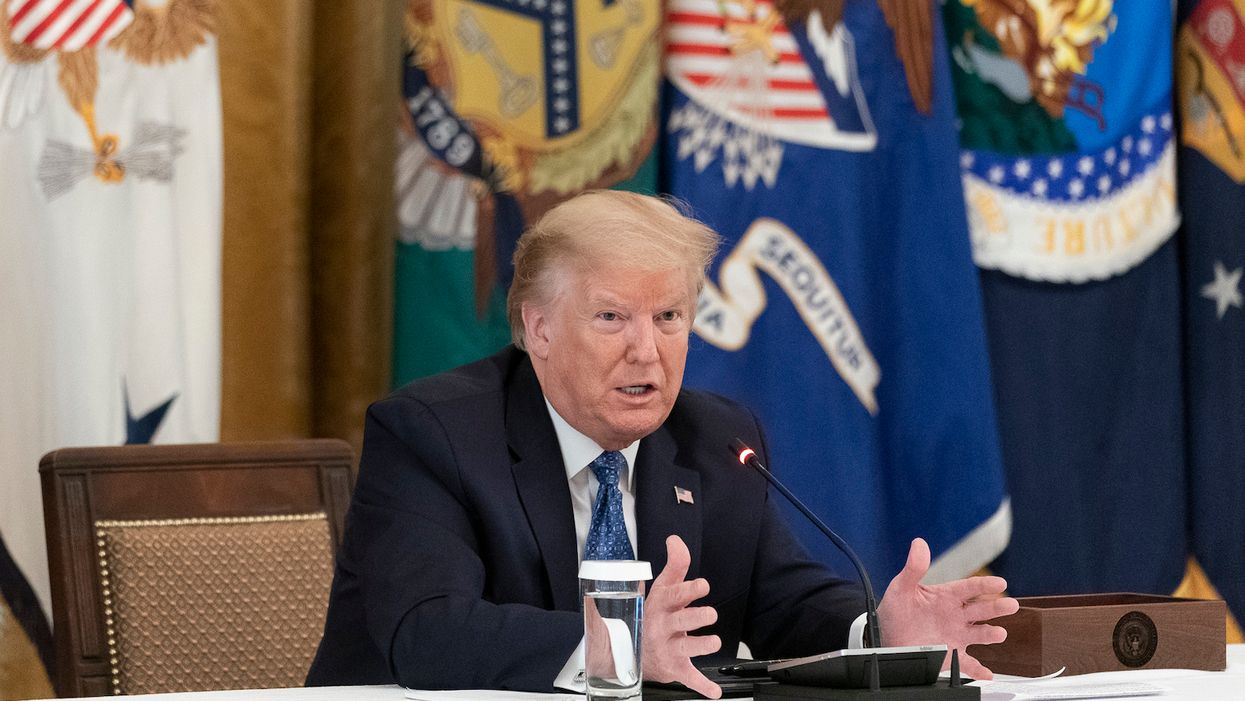 President Donald Trump baselessly accused Democrats of trying to "steal" the election, offering no evidence, and falsely declared victory even as Democratic presidential nominee Joe Biden appeared to have an edge in the vote count.

Biden — who has 238 electoral votes, as of 3:15 a.m. Eastern Time, per Associated Press reports, while Trump has 213 — spoke first after polls had closed across the nation, predicting that he is "on track to win the election." Biden cautioned, however, that there were a lot of votes left to be counted.

"I'm optimistic about this outcome," Biden told supporters in Wilmington, Delaware, adding that he was "feeling good" about Michigan and Wisconsin, where millions of mail-in votes remain to be counted. Georgia, he said, is still up for grabs.

Ballot counting in Michigan, Wisconsin and Pennsylvania is sure to continue well into Wednesday. The New York Times' dreaded "needle" gives Biden a slight edge in Georgia, although Trump remains ahead, with many votes outstanding in the Atlanta metropolitan area.

Trump quickly followed up by baselessly alleging on Twitter that Democrats were "trying to STEAL" the election and falsely claimed that votes were being "cast after the Polls are closed." Trump misspelled the word "polls" as "poles" in his initial tweet before his second attempt was flagged by Twitter for violating its policy on misleading election claims.

Votes cannot be cast after the polls are closed anywhere in the country. Trump's complaints have for weeks been aimed at states that count valid votes postmarked before Election Day but accepted up to several days later.

Trump later falsely told mostly maskless supporters in the East Room of the White House that Democrats were "trying to disfranchise" his voters and falsely declared that "we already have won" the election.

"This is a major fraud on our nation," he baselessly claimed. "We'll be going to the U.S. Supreme Court."

"We want all voting to stop," he added, referring to the counting of valid and legal votes cast before polls closed. "We don't want them to find any ballots at 4 o'clock in the morning."

"Almost everything President Trump said in his declaration of victory was not true," CNN's Jake Tapper said after Trump's remarks. "He did not win. He has not won."

"This is an extremely flammable situation and the President just threw a match on it. He hasn't won these states," Fox News' Chris Wallace said on his own network.

The two candidates are locked in an unexpectedly close race as Democratic hopes for a decisive landslide have evaporated. Biden appears to have a clearer path to victory, but the result remains highly uncertain and the most competitive states remain too close to call. Trump still leads in early results in Michigan, Pennsylvania and Wisconsin.

Biden piled up a quick electoral-vote lead early, netting large totals in the Northeast and on the West Coast while picking up traditionally red Arizona, while President Trump won big in the South and across the heartland, including victories in Florida, Texas and Ohio, three of the biggest electoral prizes. Trump also holds narrow leads in North Carolina and Georgia, although the latter state looks to be exceptionally close once all votes are counted

Three important states won by Trump in 2016 remain undecided and may stay that way for a while. In Wisconsin, Michigan and Pennsylvania, millions of mail-in ballots are still to be counted.

On the Senate side, Democrats need at least four pickups to regain the majority — and at this writing, it appears they may fall short. They picked up one seat in Colorado, where former Democratic Gov. John Hickenlooper defeated incumbent Cory Gardner, R-Colo., while losing one in Alabama, where former Auburn University football coach Tommy Tuberville, a Republican, defeated incumbent Doug Jones, D-Ala. Senate Majority Leader Mitch McConnell, R-Ky., and Sen. Lindsey Graham, R-S.C., were both easily re-elected. In a major disappointment for Democrats, Sens. Joni Ernst, R-Iowa, and Steve Daines, R-Montana, also won re-election, making the prospect of a Democratic Senate majority very difficult.

Biden entered the day leading Trump nationally by more than eight percentage points, according to FiveThirtyEight's polling average. Biden had a similarly large lead in critical states like Michigan and Wisconsin, while holding narrower leads in Florida, Pennsylvania, Arizona, Georgia and North Carolina. While FiveThirtyEight and other election forecasters gave Biden close to a 90% chance of winning, poll guru Nate Silver warned that state polls were significantly tighter than the national polls — and that a 10% chance of winning for Trump "isn't zero." Trump quickly defied any expectations of a Democratic landslide by running up the vote in the South.

This election is unlike any that has come before, largely because of the influx of mail-in and early votes. More than 100 million ballots were cast prior to Election Day, nearly double the 2016 total of early votes, and about 75% of the overall voter turnout in the last presidential election. As many as 150 to 160 million votes are expected to be cast in total, up from about 137 million in 2016.

Nearly 36 million early votes were cast in person while more than 65 million were cast by mail, according to data from the U.S. Elections Project at the University of Florida. The early vote heavily favored Democrats. Republicans edged out Democrats in the in-person early vote 42 to 36 percent in states that reported party registration, but Democratic mail-in ballots outnumbered Republicans 48-27.

Different states have different rules for how they count and report early and Election Day votes. The Cook Political Report's Dave Wasserman cautioned that states like Wisconsin, Pennsylvania and Michigan were not allowed to start counting mail-in ballots until this week, meaning that early Election Day results may show a "red mirage" in which Trump holds lead before the bulk of the vote is totaled.

"It will be easier than ever for initial vote tallies to lead untrained eyes astray," Wasserman warned. "So patience is essential for the media and the public, and it's critical to wait for experienced, statistically driven network decision desks to make projections."

Though Trump has baselessly tried to sow doubt in the security of mail-in ballots and bet big on a strong Election Day turnout, some in the president's camp believe that may have been a mistake.

"The team in Pennsylvania was not as prepared as it should be in a state that could decide the presidency," one campaign source told NBC News' Peter Alexander. "When you bank your entire election on Election Day turnout, you have to ask people if they're going to stand in line for two hours."

The latest NBC News/Wall Street Journal poll showed that Biden led 61-35 among self-reported early voters while Trump led 61-32 among the 28% of voters who said they planned to vote in person on Election Day.

Though there has been concern that large numbers of mail-in ballots could be rejected because of the influx of first-time early voters, early data suggests that a lower percentage of such ballots have been flagged than usual. More ballots may still be rejected for various reasons, including late arrival, a growing concern given that U.S. Postal Service processing times slowed down ahead of the election. The USPS told a court on Tuesday that it cannot trace what happened to 300,000 ballots and refused to comply with a court order to sweep 12 postal districts across 15 states to ensure that any found ballots are rushed to be delivered before polls close. A judge later allowed additional time for the agency to comply with the order in certain key swing states.

Trump and the Republicans have also waged legal battles seeking to invalidate late-arriving votes. One case in Pennsylvania surrounding ballots that are postmarked by Election Day but arrive later could still make its way to the U.S. Supreme Court, where new Justice Amy Coney Barrett could cast a deciding vote. But election law experts note that the election would have to come down to that state — and the number of ballots would have to be great enough to swing the entire state's electoral votes — in order to actually impact the presidential race.