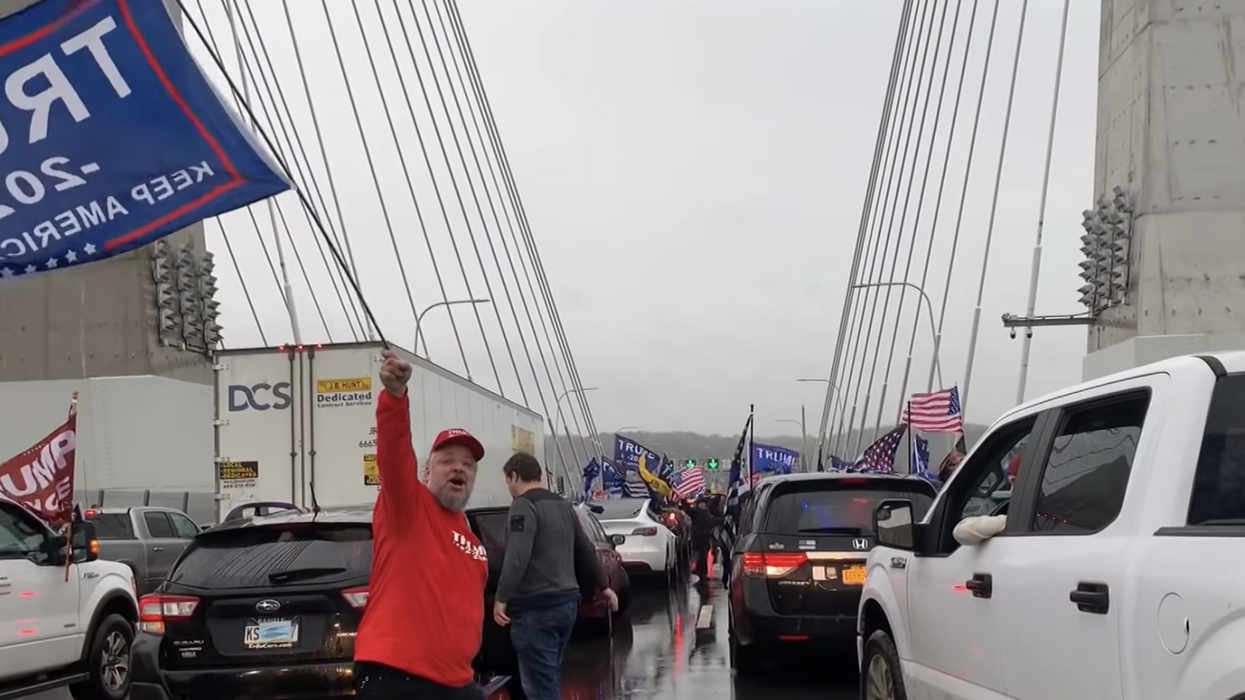 All over the United States, rowdy caravans of pro-Trump motorists have been causing problems — from a caravan in Texas that surrounded a Biden-Harris campaign bus to a caravan in Riverside County, California that made it difficult for voters to get to a polling place. And in New Jersey, police are considering pressing charges against Trump supporters who participated in a caravan that blocked traffic along the Garden State Parkway on Sunday, November 1.

The following day, during one of Gov. Phil Murphy's coronavirus briefings, New Jersey State Police Superintendent Patrick Callahan declared, "I want to be clear: that situation on the Parkway yesterday was irresponsible and dangerous."

That caravan was broken up by New Jersey state troopers, who didn't issue citations. According to Callahan, issuing citations at the time would have made the traffic jam even worse. But Callahan noted that issuing summonses for obstructing traffic to those who were at the front of the caravan is still an option.

Callahan stressed, "There's plenty of ways for people to make their voices heard, but when they endanger the lives of those out there traveling our highways and byways, there's really no excuse for it. And it gave us great cause for concern."

At that coronavirus brief, Murphy described the caravan on the Garden State Parkway as "silly and dangerous" — noting that blue New Jersey, unlike its neighbor Pennsylvania, isn't even a swing state. Former Vice President Joe Biden is almost certain to win New Jersey in the presidential election.

"If you want to get your guy elected president, either one of these guys, go to Pennsylvania or go to one of these places where the race is on the knife's edge," the Democratic New Jersey governor advised.

While the pro-Trump caravan in New Jersey was annoying, one in Texas was worse than annoying — it turned violent when some of the Trump supporters surrounded a bus of volunteers for Biden's campaign on Friday, October 30. The bus was on its way from San Antonio to Austin, and the FBI is investigating the incident.

Prosecutor Dave Aronberg, who serves as state attorney in Palm Beach County, Florida and is often featured as a legal analyst for MSNBC, argued that Trump supporters in that Texas caravan might have committed major felonies — including voter intimidation and "false imprisonment." Trump, however, has applauded those Texas supporters and insisted that they did nothing wrong.

Monday morning, November 2 on MSNBC's "Morning Joe," Aronberg told hosts Joe Scarborough and Mika Brzezinski, "This is how democracies die. In a fully functioning democracy, you wouldn't have the political leader celebrating his armed supporters bullying his political opponents. So, that's why I'm glad the FBI is investigating. And I hope that state officials investigate it as well, because there could be some federal and state crimes here, depending on what the evidence shows. It could be violations of voter intimidation. It could be, possibly, aggravated assault if someone was waving a gun at the bus. There could be attempted false imprisonment."

On November 1 — the same day as the New Jersey caravan — a pro-Trump caravan in Riverside County, California east of Los Angeles snarled traffic and made it difficult for voters in Temecula, California to get to a polling place. And some of those voters called the police.

But the pro-Trump motorists in Riverside County are unlikely to make even a small a dent in Biden's blue wall in California, which was a red state as recently as the 1980s but is now deep blue and hasn't gone red in a presidential election since George H.W. Bush's victory over Democrat Mike Dukakis in 1988. A University of California at Berkeley poll released in late October found Biden with a 36% lead in California.