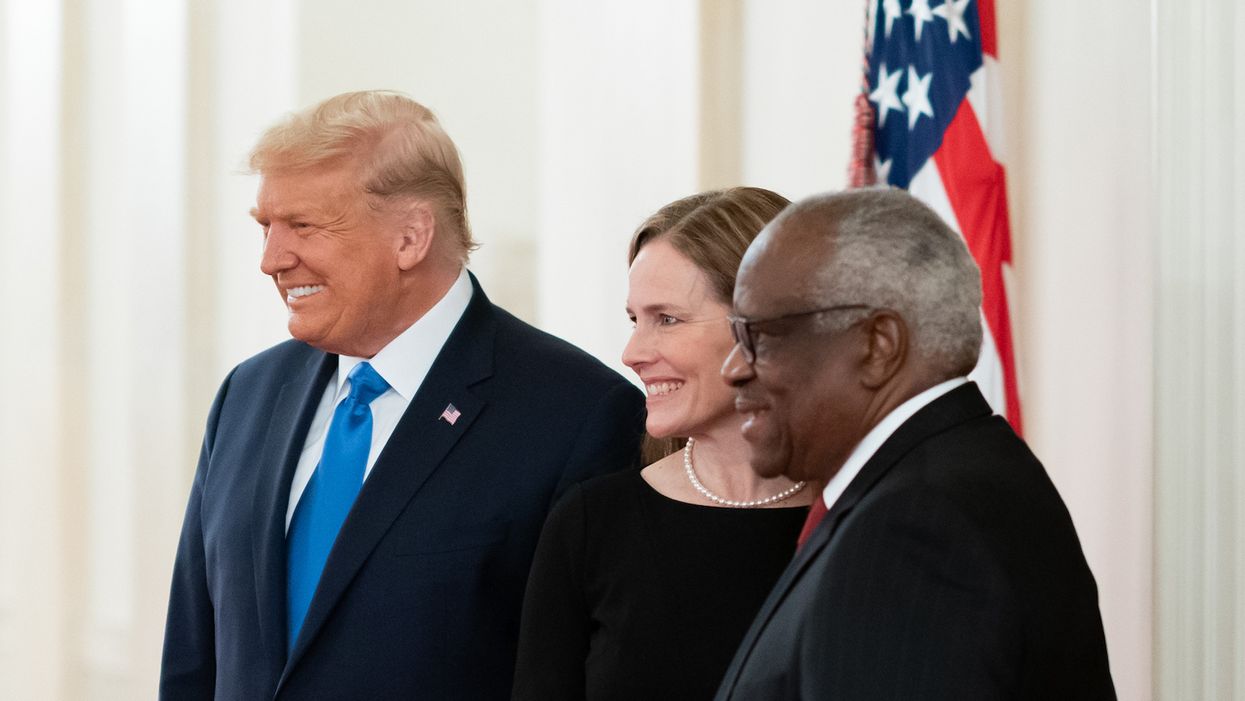 Nov. 3 delivered a crippling blow to fair elections for the coming decade after Republicans scored a sweeping victory in the battle for control over redistricting following this year's census, giving them the power to gerrymander up to half of the country. The GOP is poised to draw four or even five times as many congressional districts as Democrats, almost as extreme as the advantage the party enjoyed following the 2010 wave.

But not only did Republicans secure their grip on the cartographer's pen across the country, they could also see the potency of their gerrymanders get turbocharged thanks to the radical new 6-3 majority on the Supreme Court. The future of redistricting depends heavily on what the court's new far-right majority does in three different areas:

The Supreme Court isn't the only threat, though, and it remains unclear just how much damage Donald Trump has done to corrupt the accuracy of the 2020 census. Let's delve into each of these areas, including the options Democrats have left for fighting back.

The court's most wide-reaching impact could come if it upends a bedrock of two centuries of federalism by accepting an extreme and unprecedented view of the U.S. Constitution's "Elections Clause." That clause, found in Article I, Section IV, gives the "legislature" in each state the power to set the "times, places, and manner of holding" federal elections—though it adds that Congress "may at any time make or alter such regulations"—which is why, for instance, there's a federal law from the 19th century setting a uniform date for congressional elections.

Republicans have argued in several ongoing cases over uncounted absentee ballots that this clause only empowers the state legislature itself. That claim would exclude all those who hold the power to set or interpret laws under state constitutions, such as state courts, voters (via the ballot initiative process), or potentially even governors when they exercise their veto powers.

The Supreme Court rejected this radical interpretation of the Elections Clause in a 5-4 ruling in 2015 that upheld the right of Arizona voters to strip their Republican-run legislature of the power to draw new maps through a 2000 ballot initiative that established an independent redistricting commission. However, two of the justices in the majority in that ruling, Ruth Bader Ginsburg and Anthony Kennedy, are no longer on the court and have since been replaced by justices much further to the right.

Chief Justice John Roberts wrote an angry dissent in the Arizona case and was joined by Samuel Alito and Clarence Thomas, all of whom of course still serve on the court. Neil Gorsuch, meanwhile, has signaled that he would accept this unfounded legal theory in a pending case over late-counted mail ballots in Pennsylvania, and Brett Kavanaugh appears likely to join his nihilistic colleagues. Amy Coney Barrett hasn't weighed in on the issue only because she didn't have time to do so before Election Day.

If the Supreme Court does hold that only literal state legislatures may set federal election laws absent congressional intervention, independent redistricting commissions enacted by initiatives placed on the ballot by ordinary citizens could get struck down in Arizona, California, and Michigan. It would also eliminate the possibility of setting up independent commissions through future initiatives in states like Arkansas, Florida, Oklahoma, and more.

The court could even go further and strip governors of their ability to veto new redistricting plans, if indeed only "legislatures"—free from gubernatorial involvement—can determine how elections are run. Such a move would disproportionately benefit Republicans, since it would bar many more Democratic governors in states with Republican-run legislatures (such as Louisiana, Michigan, Pennsylvania, and Wisconsin) from blocking new gerrymanders than vice versa.

Should this most extreme state of affairs come to pass, the only solution for Democrats would be to win control of more legislatures, but they'd be fighting on gerrymandered maps deliberately tilted against them.

The second grim scenario, which is the likeliest to transpire, would largely impact gerrymandering in states Republicans already control. Specifically, the Supreme Court could eviscerate the rest of the Voting Rights Act (VRA) by invalidating Section Two of the VRA's ban on laws that have a discriminatory effect on voters. Chief Justice John Roberts has in fact spent his four-decade career in Washington trying to do just that, and he now has five allies on the bench—and only four are needed.

The court may gut Section Two either by finding it unconstitutional or by making its test for showing discriminatory impacts impossible to satisfy, the latter of which it could do in an Arizona voting case it will hear next year. That would eliminate the requirement stretching back three decades that maps be drawn to create districts where voters belonging to racial and ethnic minorities, like Blacks and Latinos, can elect their chosen candidates. Republicans could gain perhaps as many as a dozen more congressional seats, concentrated largely in the South, and the impact on certain state legislatures would be even more dramatic.

Lastly, the Supreme Court could make GOP gerrymandering worse by allowing Republicans to draw districts based solely on the eligible voter population instead of the total overall population, which has been the longstanding norm. Not only is the eligible voter pool whiter, it also excludes children, noncitizens, and potentially even some of the 5 million Americans disenfranchised due to felony convictions.

Using the voter population would make Republican gerrymandering more potent in several key states such as Texas, where communities with large Latino populations that lean Democratic are typically much younger and have many more noncitizen immigrants than whiter communities with fewer children.

Furthermore, people disenfranchised due to felony convictions are disproportionately Black and concentrated in Southern states such as Mississippi, which bans one in six Black citizens from voting for life, three times the rate of whites. A 2019 expose of leaked documents confirmed that Republicans have been plotting to bring this change about, and the Supreme Court did not eliminate the possibility in a 2016 ruling.

However, one key wrinkle in this plan is that the Supreme Court refused to let Trump place a citizenship question on the census last year. Trump subsequently ordered the Census Bureau to use existing administrative records to match citizenship data from other sources with the granular type of census data needed for redistricting. However, Joe Biden could block the release of such data, and litigation over it appears likely.

But even if citizenship data is unobtainable for redistricting, age data won't be, and the full adult population is still whiter than the total population, especially in places like Texas. However, Trump has also tried to sabotage the accuracy of the census by rushing an incomplete count, the damage from which is yet unknown.

Despite all this, Democrats and reformers still have a number of ways to fight back. The most important target right now is to win two Jan. 5 runoffs for the Senate in Georgia, which would split the chamber at 50 seats apiece. If, as looks likely, Joe Biden wins the presidency, Kamala Harris could break ties as vice president.

Should that come to pass, Democrats could eliminate the filibuster and pass legislation in Congress to ban congressional gerrymandering by mandating independent commissions in every state. They could also reform the Supreme Court in a variety of different ways, including by adding more seats.

Options also remain at the state level for as long as the Supreme Court's hardliners back away from the ledge and don't blow up the foundation of federalism. In a silver lining, voters in Arkansas, Florida, and North Dakota all rejected GOP-backed ballot measures this year that would have made future progressive ballot measures much harder, if not impossible. Arkansas and North Dakota, meanwhile, were poised to vote on redistricting reform measures in 2020 before GOP-dominated courts threw them off the ballot, so future efforts this decade could yet succeed.

But this year's elections have already brought dire news even if worst-case scenarios don't come to pass. After a lost decade following 2010 in which Republicans repeatedly won control of key states such as Michigan, North Carolina, Pennsylvania, and Wisconsin despite Democrats winning more votes, Republican minority rule is becoming self-entrenching in many states. 2020 was a key opportunity to level the redistricting playing field in many states and protect majority rule, but Republican wins have ended those hopes.

Yet even if the Supreme Court does take this country down the darkest possible paths, all hope is not lost. Examples abound of countries bringing democracy back from the brink, including a recent one nearby.

Last year, millions of citizens in Chile organized massive street protests amid widespread discontent triggered in part by a Supreme Court that kept thwarting the country's left-of-center governments. These protests led to a peaceful revolution that culminated last month with Chileans voting to write a new constitution.

Americans still have other avenues for redress, but whatever conclusions we draw from them, this week's election showed that our country remains home to a majority that believes in democracy and wants to see the will of the people honored.