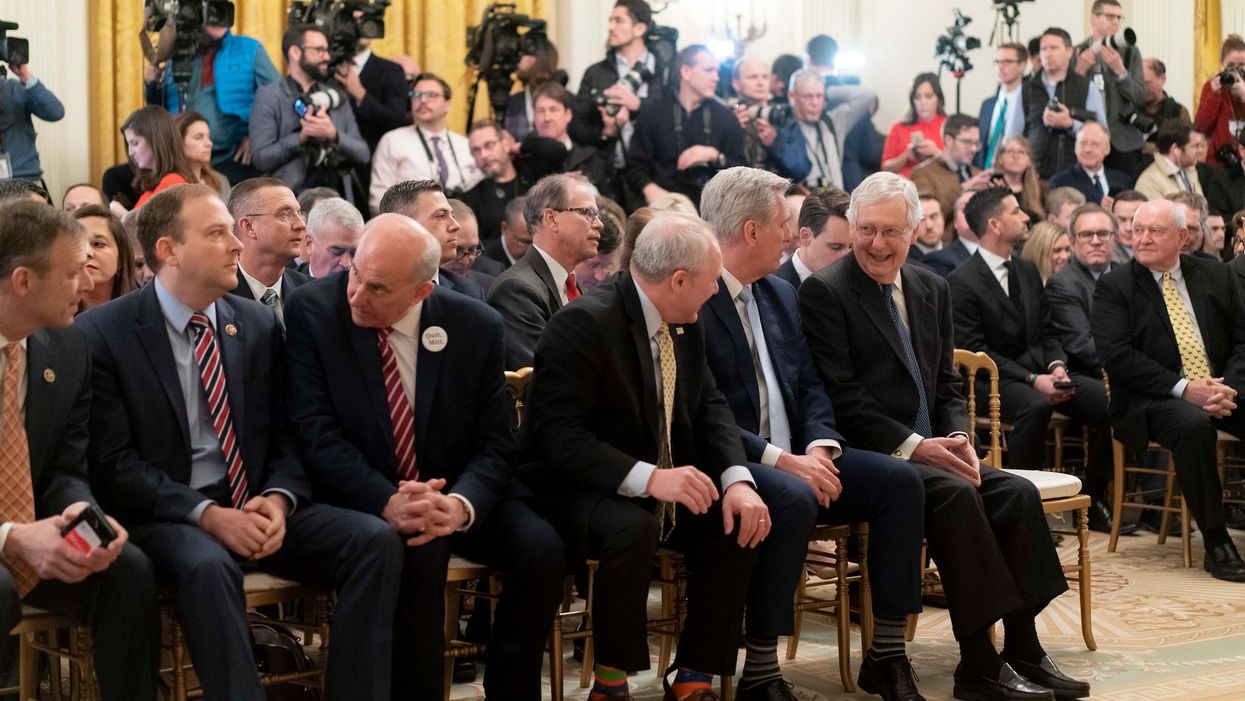 We are enmeshed in several "existential crises" that Trump and the Republicans have exacerbated – climate change; threat of nuclear war; US democracy; and the Covid-19 pandemic. However, there is at least one other "existential crisis" that is most often overlooked – the very existence of unions as an effective representative of working-class interests is at risk. Trump and the Republicans have launched a broad offensive involving all three branches of government to undermine the legal and civil foundation of organized labor: the right to be represented by a union and to collectively bargain for wages, benefits, and working conditions.

Four more years of Trump could result in the utter demise of the labor movement and the immiseration of a large portion of workers while furthering the concentration of income, wealth and power among a corporate and billionaire elite. This is not to say that Biden and the Democratic Party are the second coming of FDR and the New Deal. However, Biden and the Democrats are not out to destroy unions and, at the very least, will blunt the corporate/Republican anti-union crusade. And, at best, Biden and the Democrats will enact pro-worker legislation to the degree that unions and progressive groups are mobilized and activated. While the Democrats represent the possibility of pro-worker legislation especially if pushed by mass mobilization, Trump and the Republicans are out to destroy unions no matter what we do.

In a series of three articles, I will examine the anti-worker offensive launched by the Republican Party and President Trump as well as the alternative offered by the Democratic Party and Biden. This first article will analyze the reasons why the Republican party has declared a war against unions. The second article will examine the two-pronged offensive launched by President Trump and the Republican Party against unions; namely, stacking the deck by appointing proven anti-union ideologues to key positions and rigging the rules by enacting anti-union/pro-corporate policies. The final article will describe Biden's stated policy positions in relation to labor and propose a number of recommendations for union supporters to mobilize not only to defeat the anti-union Trump led Republican Party but also to ensure that a Biden administration follows through on his pro-worker promises.

While these articles focus on the attack on workers' rights and the promotion of corporate power, they are in no way meant to take away from the importance of the other crises and issues we face – the struggle for workers' rights is inextricably linked to the struggle for civil, human and economic rights; a clean and healthy environment; an equitable distribution of income, wealth and power; and the creation of an effective and functioning democracy.

The GOP Wants to Destroy Unions

The Republican Party has historically been a bitter opponent of labor unions. Since the New Deal, Republicans have consistently supported efforts to weaken unions by eliminating or eroding statutory protections for the right to organize and collectively bargain for better wages, benefits and working conditions. Most famously, Republicans initiated and overwhelmingly supported the Taft Hartley Act which weakened unions by prohibiting many of the tactics that made unions formidable during the 1930s and 1940s. President Reagan launched another attack against unions when he broke the air traffic controllers union (PATCO) during his first term and legitimized the use of non-union "permanent replacements" for striking union workers. As will be examined in the next article, President Trump and the current Republican Party have taken this anti-union crusade to new heights.

Big Business funds – and therefore controls - the Republican party. According to data from the Center for Responsive Politics, big business invested $20.1 billion in federal campaign contributions from 1990 through the first half of 2020. Republicans received 57% while Democrats received 43%. Business trade associations including the powerful US Chamber of Commerce gave 84% of their campaign contributions to Republicans and just 16% to Democrats. A 2019 report examining the donations of the CEOs of the top 1,500 publicly traded companies from 2000-2017 found a strong bias in favor of Republicans: 57.7% donated to Republicans, 18.6% to Democrats, with the rest leaning toward neither party. Even though big business does give billions of dollars to Democrats and thus has a lot of power within the Democratic Party, big business gives many billions more dollars to the Republican Party which it dominates. Meanwhile, unions invested just $1.6 billion in total campaign contributions from 1990 to 2020 – 91% of which went to Democrats.

But the impact was not just felt by unions. A major study examined the impact of Right to Work laws not only on unions but also on the Democratic party:

Republican party voters are primarily located in states with an anti-union history. The strength of the Republican party is centered in states that have adopted anti-union policies such as the "right to work" laws described above. It is no surprise that the Republican Party launched, and corporate donors funded a major effort to extend right to work laws to "fair share" states. Since 2010, six additional states controlled by Republicans passed Right to Work laws for a total of 27 states altogether. These 27 states accounted for 83% of the current crop of Republican senators; 82% of Trump's total 2016 electoral college votes; and almost 70% of the total number of Republican representatives.

The Democratic Party is not a labor party. Unions form an important constituency of the Democratic Party in terms of funding, voting and providing the volunteers needed for canvassing, phone banking and getting out the vote. Ironically, the Republican Party recognizes the importance of unions to the Democratic Party more than the Democratic Party. And, Big Business provides billions of dollars in support to corporate Democrats – a significant source of Democratic funding though much less than the contributions to Republicans. The importance of corporate money and influence has pushed many Democrats toward policies that aid corporations and hurt workers. Two examples illustrate the power of corporations in the Democratic Party. First, Presidents Carter, Clinton and Obama failed to prioritize labor law reforms that would have assisted unions in their fight with corporations and would have strengthened the Democratic Party. These bills failed because they were not prioritized by the Presidents and the Senate filibuster rule that gave outsized importance to Senators from anti-union, especially southern states. Second, President Clinton pushed through NAFTA and the China trade deals that led to the combined loss of 4 million jobs – many of which were good union jobs. Clinton was able to push these policies through Congress with the support of most Republicans and despite the opposition of most Democrats. President Obama attempted to pass the Trans-Pacific Partnership, called NAFTA on steroids. However, he was thwarted by opposition from labor, environmental, consumer, civil rights and religious groups – and most Democratic members of Congress.

However, despite all of that, a higher percentage of congressional Democrats are now more pro-union than ever. This is the result of the extinction of anti-union/pro-segregation Southern Democrats who have now become Republicans and the expansion of voting rights to Black and Latinx citizens who are more pro-union. Conversely, Democrats strengthened their hold in pro-union states as pro-union Republicans disappeared. Consequently, Democratic support for labor law reform has steadily increased among Congressional Democrats over time. For example, Obama – despite the issues noted above – appointed very pro-union individuals to the NLRB who issued many pro-union rules. Not one congressional Democrat supported the Republican led drive to roll back many of the new NLRB rules in 2015 when the Republicans controlled both the House and Senate. This pro-union solidarity among Democrats prevented a Republican override of Obama's veto of the legislation. And when Republicans did roll back a number of Obama era pro-labor rules when they controlled both houses of Congress, not one Democrat supported the effort. This entire trajectory was described in an interesting article by Nathan Newman who concluded, "There is [Democratic] unity in defense of labor interests in the modern Democratic Party that was nowhere to be seen during the New Deal era."

Democrats, despite Republican opposition, were responsible for passage of civil rights, age discrimination, disability rights, pregnancy discrimination, occupational safety and health, and the Family and Medical Leave acts. State laws in Democratic states are much more labor-friendly than those in Republican controlled states.

The point here is not that the Democratic Party is a labor party – it is not. And it is clear that our entire political system is dominated by corporate money. However, it is also clear that Democrats are much more pro-worker than the Republican Party. Indeed, as the next article will show – the Republican Party has launched an offensive to debilitate unions – an offensive led by President Trump, Republican majorities in the Senate and the federal judiciary and officials in Republican controlled states.

The Republican Party sees unions and their supporters as enemies to be politically and economically destroyed. The Democratic Party will not destroy unions and actually provides the possibility to assist unions in representing the interests of working people. Note to union supporters: act and vote accordingly.