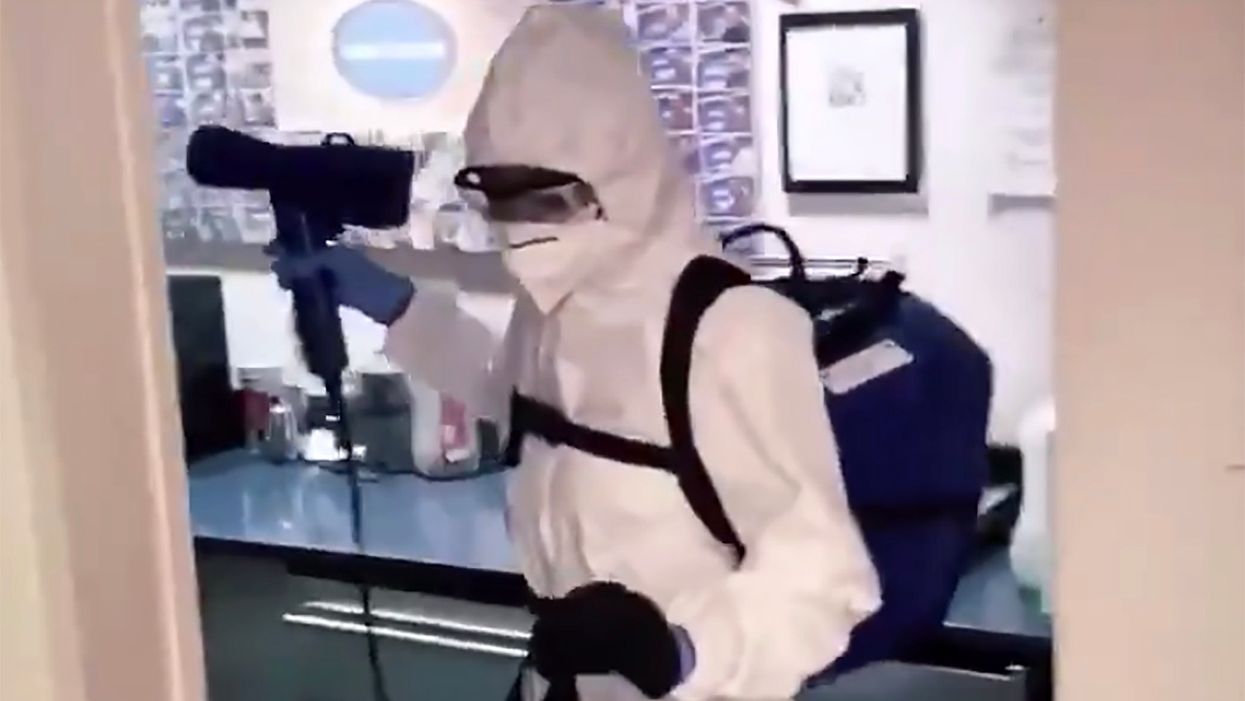 Image via Screengrab.
White House cleaning staff sick with COVID-19 told to use 'discretion' as Trump enjoys balcony photo-op
David Badash
and
The New Civil Rights Movement
October 09, 2020
There are many questions swirling around President Donald Trump and his current health status: When did he first test positive for coronavirus? When was his last negative test? Why is the White House using a rapid test to claim people are coronavirus-free when it's designed only for those with coronavirus symptoms? What is Trump's current viral load? Why won't Trump or his doctors say if he has currently tested negative? The list is long. None of those questions are expected to be answered tonight, when a pro-Trump hydroxychloroquine-pushing Fox News doctor who has made questionable and just plain false coronavirus claims will examine President Trump on the conservative cable network's show hosted by Tucker Carlson. Fox News recently won a court case by arguing reasonable viewers should not believe what is said on Carlson's show. This morning, just 25 days before Election Day, the network announced "President Trump is scheduled to make his first on-camera interview appearance on Friday since he announced last week that he tested positive for the novel coronavirus." Notice even Fox doesn't say "since he tested positive for the novel coronavirus." It says "since he announced." Because the Trump administration refuses to level with the American people about the health of their president. "The interview will take place on 'Tucker Carlson Tonight' at 8 p.m. ET. Dr. Marc Siegel will conduct a medical evaluation and interview during the program." That is Fox News contributor Dr. Marc Siegel. Media Matters reports that Siegel has appeared nearly 300 times on Fox News, as of Sept. 29, to discuss coronavirus, and says he "regularly pushes coronavirus misinformation, downplays the severity of the crisis, and discards science in favor of right-wing talking points." "In the past," Bloomberg adds, Dr. Siegel "has speculated without evidence that [Joe] Biden is using speed and Adderall before debates, said it’s 'almost impossible' for people under 70 to die from Covid-19, and argued that Speaker Nancy Pelosi should 'stop pontificating' about Trump’s health." Siegel once even attributed a decline in coronavirus deaths to a coronavirus“vaccine on the horizon” that has not been released. "Rather than reveal his medical records to reporters the traditional way in 2016, Trump dictated a letter to his doctor and shared it during a TV appearance with Dr. Oz," Bloomberg reminds Americans. As for the medical evaluation – not "medical examination," well, why should Americans trust the word of a physician who "repeatedly compared COVID-19 to the flu and said concern about the pandemic was being exaggerated to attack President Donald Trump politically, then he became among the first Fox personalities to push hydroxychloroquine as a supposed miracle treatment," as Media Matters reported last month. What else has Dr. Siegel said about the deadly virus that to date has killed nearly 215,000 people in the United States? Some excerpts from Media Matters' extensive report: What will Americans learn tonight about the health of their President? Probably whatever Trump says is the "truth." Here's what MSNBC's Chris Hayes said last night:

I don't think at this point there is any reason to give face value credence to the White House or president's doctors' pronouncements about either the timeline of his illness or his current status.