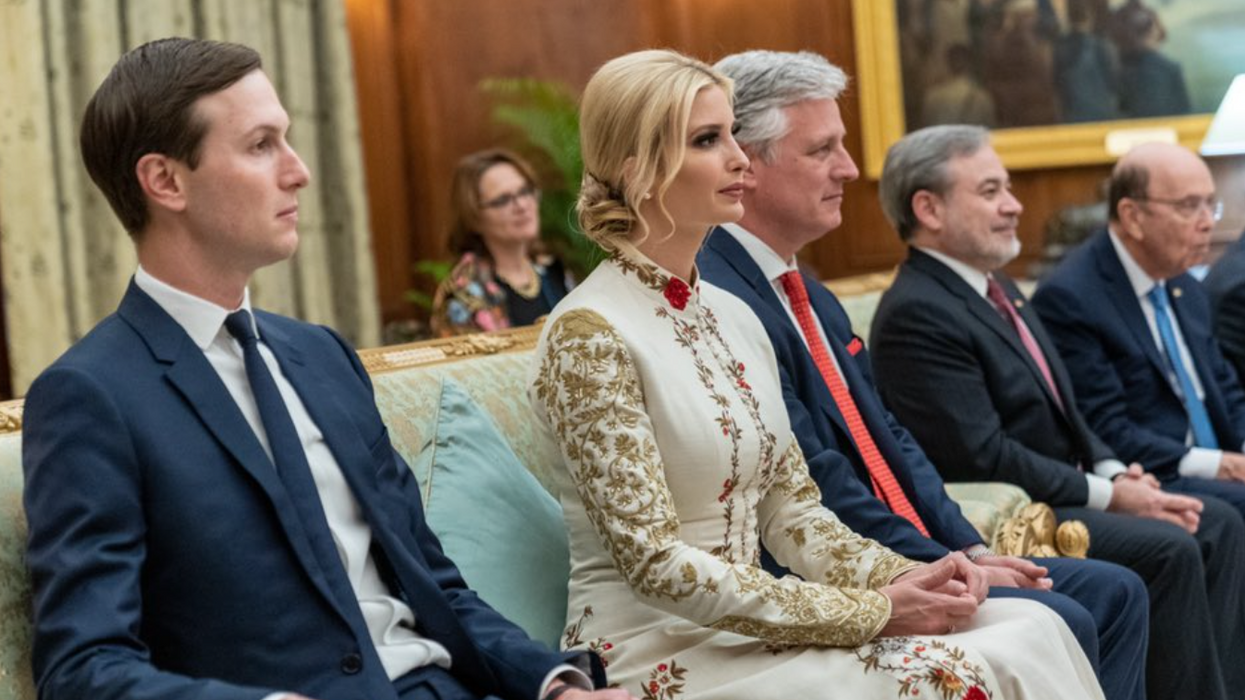 Shealah Craighead/Wikimedia Commons
Legal experts slam Jared and Ivanka's 'abusively frivolous' lawsuit over Lincoln Project billboards
Sarah K. Burris
and
Raw Story
October 25, 2020
The Lincoln Project is staffed with a slate of Republicans using a unique set of ads to bring down President Donald Trump. One of the latest is a billboard in New York City's Times Square, where many tourists often visit when they are in town. https://twitter.com/AynRandPaulRyan/status/1319821537520750592 The ad features a photo of Ivanka Trump and Jared Kushner, which prompted the first family to lash out at the organization demanding the billboard be taken down or they would sue for "what will doubtless be enormous compensatory and punitive damages." In response to the letter, the Lincoln Project's lawyers fired off a letter of their own: "Please peddle your scare tactics elsewhere. The Lincoln Project will not be intimidated by such empty bluster," the letter says. "Your clients are no longer more Upper East Side socialites, able to sue at the slightest offense to their personal sensitivities. Mr. Kushner and Ms. Trump are public officials. They have been public officials since President Trump, in a gross act of nepotism, awarded Mr. Kushner and Ms. Trump senior White House positions in 2017. The placement of Mr. Kushner and Ms. Trump in these high-level White House offices has been disastrous for Americans everywhere, but it is now also devastating to the prospects of your would-be lawsuit." They included a footnote saying that to have standing for such a case, Jared and Ivanka must "satisfy the First Amendment 'actual malice' standard to bring a libel claim." "The Lincoln Project plans to avail itself of these constitutional protections to duly criticize Mr. Kushner and Ms. Trump until they cease to be public officials, at approximately Noon Eastern Standard Time on January 20, 2021," the letter goes on. Contrary to your claim that 'Mr. Kushner never made any such statement,' Vanity Fair reported in a widely circulated article that Mr. Kushner did indeed say that New Yorkers "are going to suffer and that's their problem" during the time that he was entrusted to lead our nation's COVID-19 response," the Lincoln Project lawyers continue. "The Lincoln Project explicitly cited Vanity Fair as the source for Mr. Kushner's featured statement. Please contact us again if, at some point, you somehow succeed in convincing Vanity Fair to retract its article, but I trust that this supplemental explanation settles the matter for now as to Mr. Kushner's reported remark." They went on to dispute that Ivanka Trump "never made any such gesture." Ms. Trump took a photo of herself, "in violation of federal ethics rules," to promote a commercial product in July 2020. The photo was of her holding a can of Goya beans. They explained that the photo of her endorsing Goya beans and in the Lincoln Project's photo, she "endorses the Trump Administration policies that have led to an unacceptable number of American deaths every bit as much as she once endorsed that can of beans." They closed by saying that'd love an opportunity to "establish their truthfulness through litigation and discovery," which would be one of the most disastrous things the Trump children could face. It would mean they would be required to turn over a host of documents, emails and other things about Kushner's communications about the COVID-19 pandemic. "This isn't over," the Lincoln Project letter says. "Mr. Kushner and Ms. Trump will hear more from The Lincoln Project soon." Read the full letter below: https://twitter.com/ProjectLincoln/status/1320150701947846656
From Your Site Articles
Related Articles Around the Web
Report typos and corrections to: feedback@alternet.org.