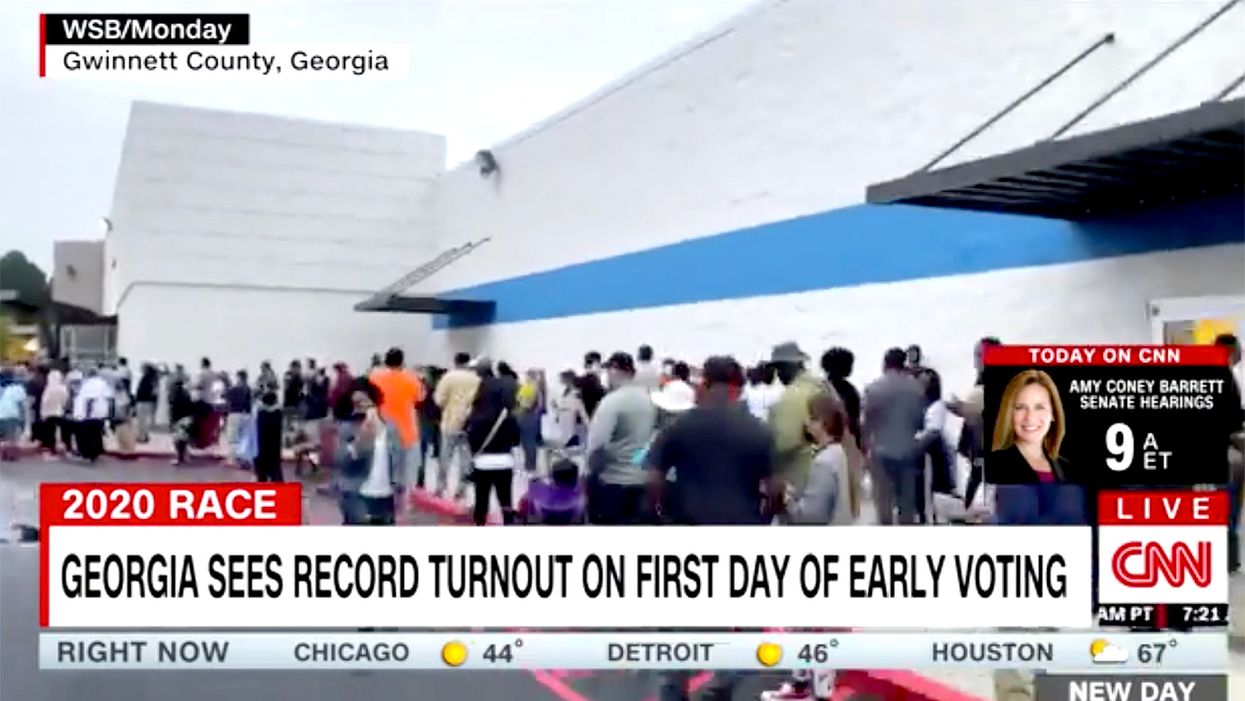 Pro Publica
Nonwhite Georgia voters have to wait in line for hours. Here are 2 critical reasons why
Alex Henderson
October 23, 2020

In recent decades, Georgia was predictably Republican outside of Atlanta. But in 2020, Georgia is, like Texas, a light red state — and if former Vice President Joe Biden wins Georgia on November 3, it might be time to start thinking of it as a swing state. Journalists Margaret Talev and Alexi McCammond, in an October 23 article for Axios, stress that Georgia will be full of nail-biters this year — from the presidential race to U.S. Senate races.

"It hasn't backed a Democrat for president since 1992," Talev and McCammond explain, "but Georgia's changing demographics may prove pivotal this year — not only to Trump v. Biden, but also, to whether Democrats take control of the Senate."

There were some warning signs for Republicans when, in 2016, Trump defeated Democratic presidential nominee Hillary Clinton by only 5% in the Peach State. Compared to the double-digit wins Republicans had enjoyed in Georgia in previous presidential elections, the 2016 results indicated that they were losing ground there. Then, in 2018, Democratic gubernatorial nominee Stacey Abrams narrowly lost to Republican Brian Kemp, now Georgia's governor. And now, polls are showing a tight 2020 presidential race in Georgia, with Biden slightly ahead in some polls and Trump slightly ahead in others.

In addition to the presidential race, reporters will be paying close attention to Georgia because of two U.S. Senate races.

"Not just one, but both of Georgia's Senate seats are on the ballot this year because of the special election to fill Johnny Isakson's seat," Talev and McCammond note. "Polling shows they're crowded or close races with no clear winner. Georgia law sends general-election races to a January 5 runoff if no one hits 50%+ — and right now, no candidate is reaching 50% in the polling. So, if control of the Senate isn't clear by then, we'll have to wait for the Georgia runoffs."

On Election Night, the states that could determine whether or not Republicans will maintain their Senate majority include Arizona, Iowa, Maine, Colorado and North Carolina. Incumbent GOP senators are considered vulnerable in all of those states. But as Talev and McCammond point out, it's important to keep an eye on Georgia's two U.S. Senate races as well.

In Georgia, the Axios reporters observe, "GOP incumbent Sen. David Perdue was tied with Democrat Jon Ossoff at 43% in the latest public polling, a New York Times/Siena College poll out this week. Libertarian Shane Hazel had 4%, potentially drawing enough support to block either major-party candidate from crossing 50%.... The intraparty battle for the other seat, between Sen. Kelly Loeffler — who's filled the seat since January after Isakson retired early for health reasons — and Rep. Doug Collins, has split the GOP side of the vote, with Loeffler holding an edge. That's allowed Democrat Raphael Warnock to slide into the lead, though no one's close to 50%."

"Nearly a third of Georgians are Black, and White people's share of the population has fallen significantly in the past two decades," the reporters observe. "With the pandemic and push toward early voting, white early voting has increased 64% in Georgia compared to the same point in 2016, according to TargetSmart. But early ballots cast by Black voters has increased 88%."