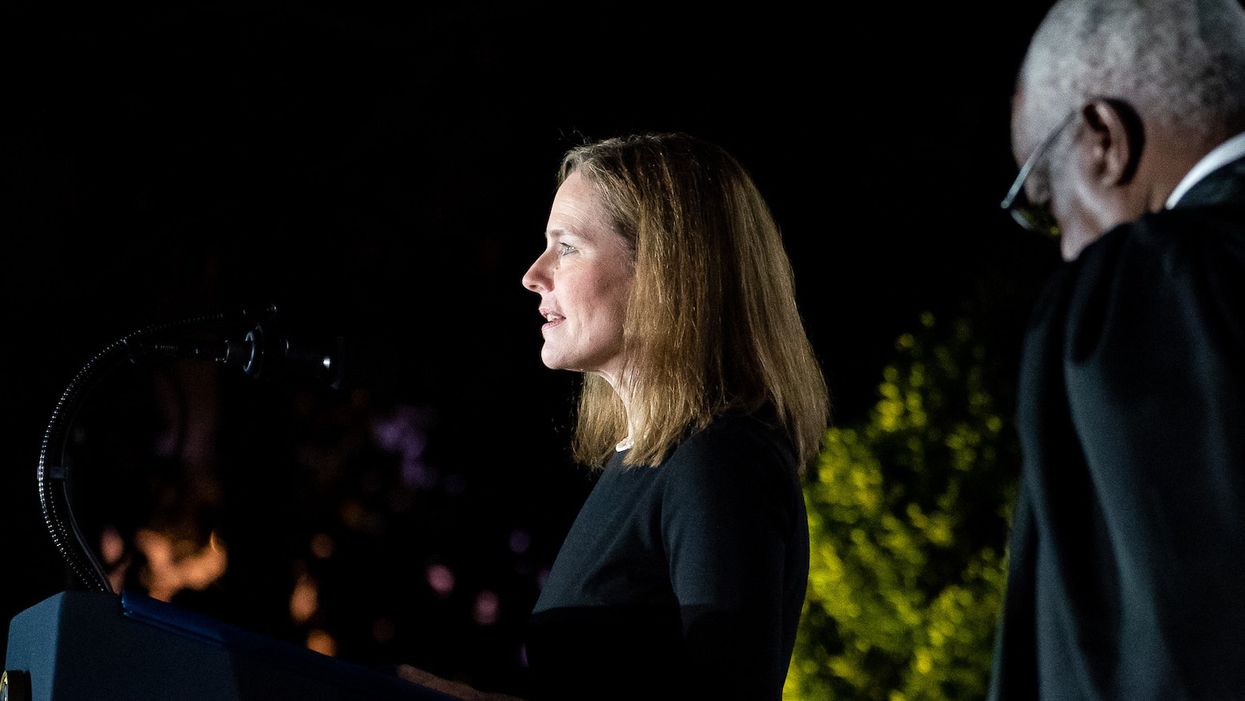 This story was produce by The Reader.

On March 16, 2016, President Barack Obama nominated Merrick Garland for the U.S. Supreme Court to succeed Antonin Scalia, who had died one month earlier. But Senate Republicans blocked his nomination on the grounds that it was too close to the presidential election, which was then seven months away. Four and a half years later, President Donald Trump nominated Amy Coney Barrett to succeed the late Justice Ruth Bader Ginsburg on the Supreme Court. Although Barrett's nomination was made just over one month from the presidential election (which Trump appears to be losing), she was confirmed.

The Democrats claimed to be united in their opposition to Barrett's confirmation. Yet their resistance to having a justice rammed through at the 11th hour of a lame duck presidency feels like the resistance that the Washington Generals used to show against the Harlem Globetrotters. That is, pure theater in which the outcome is never in doubt.

What this tells us is that the corporate donors who control the Democratic Party are happy with a Justice Barrett. In her short time on the bench, she has ruled consistently in favor of corporations. Just weeks before her nomination to the high court, Judge Barrett delivered a key ruling blocking many gig workers from suing in court when tech companies cheat them out of overtime pay. This and other business-friendly rulings are why corporations have given millions to groups such as the Judicial Crisis Network and the U.S. Chamber of Commerce to campaign for Barrett's appointment to the court. Barrett also belongs to the business-backed Federalist Society and will join five other Federalists on the Supreme Court.

The differences between Democrats and Republicans on issues like abortion and gay rights are important to be sure. But the areas of agreement between the two parties—both parties favor the interests of corporations over their workers and the environment—are also important. And these issues don't get discussed because there is no disagreement. It is just accepted by both parties that a lawyer must be business-friendly to qualify for a federal judgeship.

In a true representative democracy, a lawyer should not have to demonstrate her fealty to corporate power to become a federal judge. The interests of corporate America are closely aligned with only a small fraction of Americans: the investor class. Most of our interests are more closely aligned with those of workers and consumers. There are scores of talented lawyers who go to top law schools but do not go to work at corporate firms. Many of these lawyers devote their careers to representing ordinary people, often taking on the most powerful interests in industry and in government. These pro-people lawyers should also have a place on the federal courts.

Thurgood Marshall was a civil rights activist who distinguished himself representing victims of racial injustice before being nominated by President John F. Kennedy for a federal judgeship, and later to the Supreme Court. Marshall would never get on the court today. Without a track record of pro-corporate advocacy, the donors would reject him.

Some lawyers distinguish themselves by taking on powerful corporations that harm ordinary people through negligence or deliberate malfeasance, such as the lawyers who took on a power company's illegal dumping of toxic waste portrayed in the movie Erin Brockovich. These lawyers often exhibit great skill, resourcefulness, and integrity in fighting powerful and ruthless corporations.

Probably the most successful lawyer ever in taking on the criminal acts of massive corporations is Steven Donziger. Donziger graduated from Harvard Law School, worked as a public defender in Washington, D.C., and in 1993 agreed to represent a group of 30,000 Indigenous people and villagers in Ecuador who had been deliberately poisoned by Chevron, one of the world's largest corporations with over $260 billion in assets.

Beginning in 1964, Chevron (then Texaco) began extracting oil in Ecuador. To save about $3 per barrel of oil produced, the company decided to ignore waste regulations and dump some 16 billion gallons of toxic wastewater into rivers and pits, polluting groundwater and farmland, and destroying a large section of the Ecuadorian Amazon in what came to be called the "Amazon Chernobyl" by locals and experts. Local drinking water became noxious, and citizens became ill. This has all been confirmed by courts in Ecuador after an eight-year trial, the submission of 105 technical evidentiary reports, and testimony from numerous witnesses.

"I did not set out to be an environmental lawyer," Donziger recently told Greenpeace. "I simply agreed to seek a remedy for 30,000 victims for the destruction of their lands and water; to seek care for the health impacts including birth defects, leukemia, and other cancers; and to help them restore their Amazon ecosystem and basic dignity."

Donziger made more than 250 trips to Ecuador over the next two decades as he led the legal fight against Chevron. Then in 2011, Donziger and his team secured a $9.5 billion judgment on behalf of the victims. The trial court decision was affirmed on the merits or for enforcement by multiple appellate courts in Ecuador and Canada, including the supreme courts of both countries.

Chevron refused to pay. During the trial, it threatened the affected communities with a "lifetime of litigation." Afterwards, Chevron engaged a team of 2,000 corporate lawyers from at least 60 firms to retaliate against Donziger and the lead plaintiffs in the case, filing a barrage of SLAPP (Strategic Lawsuit Against Public Participation) and RICO (Racketeer Influenced and Corrupt Organizations) suits, legal tools used—and abused—by large companies to punish people who take them to court.

Chevron's vile and cynical legal strategy—designed to avoid paying compensation to the Indigenous people whose lives it deliberately destroyed to earn an extra $5 billion over 20 years—could not succeed without a federal judiciary populated by corporate-friendly judges willing to bend the law to protect corporate profits.

Chevron's RICO suit against Donziger was filed in the Southern District of New York, a Wall Street-friendly court. The case was presided over by U.S. district Judge Lewis Kaplan who, before being appointed to the bench by former President Bill Clinton, a Democrat, spent decades as a corporate lawyer representing tobacco companies and banks. The record of the RICO case shows that Chevron paid a disgraced former Ecuadoran judge named Alberto Guerra about $2 million to testify that the verdict in Ecuador was the product of a bribe. Chevron's cash payments to Guerra should have disqualified him as a witness. Moreover, Guerra admitted to lying about the bribe in another international proceeding. Nevertheless, after denying Donziger his right to a jury trial, Judge Kaplan found that Guerra's story was credible.

I reached Donziger by phone at his apartment in Manhattan, where he lives with his wife and teenage son. He says that his contempt trial before Judge Preska is scheduled for November 4, the day after the election. He is again being denied a jury trial.

Some 29 Nobel laureates, including nine Peace Prize winners, have signed a letter declaring that Chevron's legal assault on Donziger is "one of the most egregious cases of judicial harassment and defamation" ever seen. He has also been backed by 475 lawyers and bar associations who wrote an open letter outlining his wrongful detention and mistreatment by U.S. judicial authorities.

Donziger's story is also a story about the sad condition of the U.S. court system which, like the other two branches of our government, primarily serves the interests of the wealthy. On this topic, I strongly recommend a new book by Ronald Goldfarb called The Price of Justice.

Although the Democrats will do nothing to stop Barrett's nomination to the Supreme Court, their leader, Joe Biden, has pledged that if elected, he would establish a bipartisan commission to study whether to expand the courts to achieve greater balance.

We recall from history class that President Franklin D. Roosevelt also threatened, in 1937, to add enough liberal justices to the court to protect his programs from the "obstructionist" conservatives. The key difference then was that FDR had an agenda of bold programs to pull the country out of the Great Depression, such as putting Americans to work building post offices, bridges, schools, highways, and parks; supporting farmers and labor unions; and ending alcohol prohibition.

The Democrats of today, however, are offering nothing but a promise to wear a face mask and to not send mean tweets at 3 a.m., while Joe Biden assured his wealthy donors at a New York fundraiser that "nothing would fundamentally change" if he is elected president. Even a Supreme Court packed with Republicans is likely to go along with that agenda.

Click here for the defense fund established on Donziger's behalf.