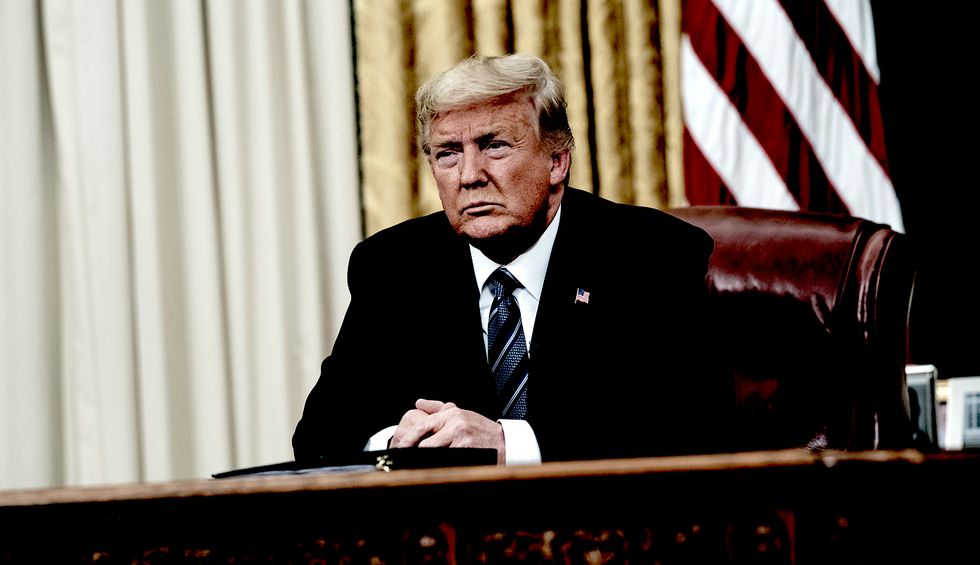 Last night, at about 10:30, reporter Dan Diamond posted another blockbuster story in Politico. Political appointees at the Department of Health and Human Services have been altering the weekly scientific reports issued by the Centers for Disease Control and Prevention (CDC) following the course of the coronavirus pandemic. They believe the reports are undermining Trump’s cheery pronouncements about the disease, and claim there is a “deep state” at the CDC determined to hurt the president.

Since 1981, career scientists have compiled weekly Morbidity and Mortality Weekly Reports to inform Americans about trends in disease. These records are not controversial. But in April, Trump passed over scientists to install one of his campaign advisers as assistant secretary of HHS for public affairs. Michael Caputo was a long-time Republican operative, an associate of Roger Stone who had worked for Russia’s Gasprom Media to improve the image of Vladimir Putin in the US.

Caputo promptly began trying to change the CDC reports on Covid. Although he has no background in medicine or science, he and his team claim that the scientists are exaggerating the dangers of Covid-19. An aide, Paul Alexander, wrote an email to CDC Director Robert Redfield calling for retroactive modifications to two reports, saying, “CDC to me appears to be writing hit pieces on the administration.” Alexander, recruited by Caputo from his position as an assistant professor of health research at Hamiliton’s McMaster University in Canada, has demanded that the CDC stop issuing reports until he is given the right to review them before publication and to make line edits.

“Our intention is to make sure that evidence, science-based data drives policy through this pandemic—not ulterior deep state motives in the bowels of CDC,” Caputo said.

The attack on transparency at the CDC echoes Trump’s attempt to protect acting director of Homeland Security Chad Wolf from testifying before the House Intelligence Committee. On Wednesday, a whistleblower filed a complaint that Wolf and his deputy Ken Cuccinelli have been pressuring intelligence officials to change their reports to bolster Trump’s campaign speeches. Rather than releasing the actual findings of intelligence experts that America’s chief threats come from white supremacists and Russian attacks on the 2020 election, Trump’s men want the intelligence reports altered to suggest that left-wing violence is equal to that of the right-wing thugs, and that Iran and China are as guilty of election interference as the Russians.

Since June, the House Homeland Security Committee has tried to get Wolf to testify before it about worldwide threats to the United States, and it had appeared that he had finally agreed to come on September 17. After Wednesday’s publication of the whistleblower complaint though, the administration did something sneaky to try to keep the House from being able to make him testify.

Trump never officially nominated Wolf for the position he holds, both because keeping his officials “acting” means they are beholden to him, and because Wolf would have a hard time winning confirmation because he had no experience with either law enforcement or intelligence, which the law requires in a Director of Homeland Security. But, thanks to a quirk in the law, Wolf could move into an acting position so long as he had been confirmed by the Senate for a different position. The day the Senate confirmed him as a DHS undersecretary, the resigning acting DHS director switched the line of succession in the department to let Wolf move into the directorship. But, according to the Government Accountability Office, the man who switched the line of succession was himself appointed illegally, and so therefore had no authority to install either Wolf or his deputy, Ken Cuccinelli. So they are both serving illegally.

I know. Clear as mud, right?

But here’s why this matters for transparency: As soon as the whistleblower story broke, Trump unexpectedly nominated Wolf for the actual job he has held illegally for more than ten months. Immediately, DHS told the House that Wolf could not testify in front of the committee, because “it is standard practice for nominated officials not to testify in their acting roles in front of a congressional committee before they have been confirmed.”

Representative Bennie G. Thompson (D-MS), Chair of the House Committee on Homeland Security, promptly subpoenaed Wolf, saying “From the coronavirus pandemic to the rise of right-wing extremism to ongoing election interference, there are urgent threats requiring our attention. Mr. Wolf’s refusal to testify – thereby evading congressional oversight at this critical time – is especially troubling given the serious matters facing the Department and the Nation.”

Assistant DHS Secretary Beth Spivey responded: “The arguments in your letter are without merit.” She said that from the moment Trump nominated Wolf, he “became unavailable to testify before Congress on matters unrelated to his nomination.” This will become a protracted fight. It is unlikely we will hear from the Director of Homeland Security about attempts to bend intelligence reports to support the president’s reelection until after the election, if then.

If this hearing was legitimately about threats to the homeland, @HomelandDems would immediately accept our offer to… https://t.co/AisySMtYaA
— Chase Jennings (@Chase Jennings)1599862696.0

If this hearing was legitimately about threats to the homeland, @HomelandDems would immediately accept our offer to… https://t.co/AisySMtYaA
— Chase Jennings (@Chase Jennings)1599862696.0

The Justice Department, too, is being shaped to support Trump’s narrative. Yesterday, Nora R. Dannehy, the top aide to John Durham, resigned from the department, apparently because of pressure from Attorney General William Barr to complete a report that could bolster the president’s claims that the Obama administration improperly began an FBI investigation of his campaign in 2016. Both the inspector general of the Department of Justice and the Senate Intelligence Committee have already concluded that the investigation was begun legitimately and conducted without political bias.

And today, as western states continue to suffer from runaway wildfires, the South and East face unusually bad hurricanes, and Iowa tries to rebuild from a derecho, we learned that the National Oceanic and Atmospheric Administration (NOAA) has hired a climate-change denier. David Legate has spent his career casting doubt on climate science: in 2014, he told the Senate that the U.N. Intergovernmental Panel on Climate Change, which identifies international consensus within the scientific community of 195 countries (no mean feat) is wrong. His work has been funded in part by grants from Koch Industries, ExxonMobil, and the American Petroleum Institute. Neither he nor NOAA would tell NPR why he was hired.

All of these stories dovetail neatly with the information shared this week from journalist Bob Woodward’s forthcoming book. Woodward reveals that Trump knew on January 28 just how bad the coronavirus was. He called Woodward on February 7 to tell him “this is deadly stuff,” and to detail for him that the virus was airborne and that it was five times more deadly than “even your strenuous flus.” But he continued to tell the American people that coronavirus was going to disappear, that they did not need to wear masks, and that those warning of its dangers were trying to advance a “hoax” to weaken his administration.

I write a lot about the philosophy of living in a fact-based reality, explaining the Enlightenment idea that we can move society forward only by evaluating fact-based arguments. Replacing facts with fiction means that as a society we cannot accurately evaluate new information, and then shape policy according to solid evidence. But the Trump administration’s attempt to hide reality under their own narrative reveals a more immediate injury. You cannot make good decisions about your life or your future if someone keeps you in the dark about what is really going on, any more than you can make good business decisions if your partner is secretly cooking the books.

We are pleased to be presenting daily posts from Heather Cox Richardson’s “Letters From an American” email newsletter. You can sign up to receive it in your inbox here.