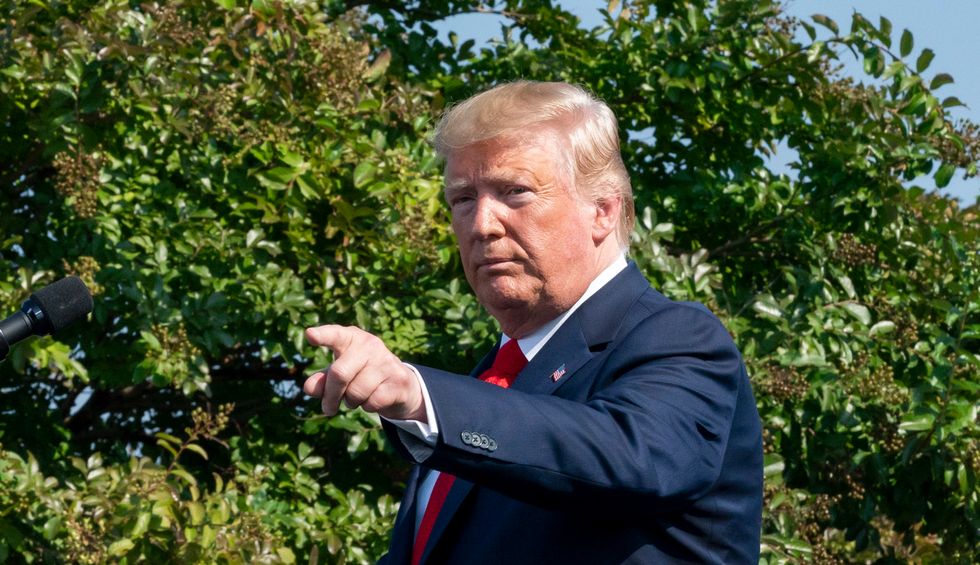 Here's the first thing to notice about the horrific news cycle of the past few days: Donald Trump is openly stoking right-wing violence, in no small part, because it bumps the coronavirus pandemic (6 million cases and rising, more than 183,000 dead) and the economic crisis (10% unemployment and 29 million Americans going hungry) out of the headlines.

The second thing to note is that it's nonetheless a terrifying development that will almost certainly lead to more violence, especially in light of what promises to be a chaotic but close election, where violent tactics and intimidation could affect the outcome.

On Monday afternoon, after days of encouraging right-wing aggression on Twitter against the largely peaceful Black Lives Matter protesters, Trump gave a press conference in which he upped the ante by defending Kyle Rittenhouse, the 17-year-old who apparently shot three people, killing two of them, during a weekend protest in Kenosha, Wisconsin.

Trump's claim? It was self-defense. "I guess it looks like he fell and then they very violently attacked him," the president said, adding that Rittenhouse "probably would have been killed" had he not shot the protesters, though, in standard Trump fashion, he hedged the whole thing by noting that the shootings are "under investigation."

Trump's language is, not surprisingly, misleading. The investigation has advanced to the point that criminal charges have been filed that present a clear narrative: Rittenhouse shot people who were trying to disarm him.

During the same press conference, Trump defended the caravan of right-wingers that invaded Portland, Oregon, over the weekend for the obvious purpose of terrorizing the population, especially BLM protesters. Trump claimed that this caravan "protested peacefully," even though there's video of them shooting unarmed people with paintball guns and pepper spray. One member of the right-wing group Patriot Prayer was shot and killed during this encounter — it's not clear what happened, but to be clear, lethal violence is deplorable no matter who's pulling the trigger.

Trump of course seized on the shooting as a way to depict the right-wing caravan as a band of innocents, saying they used "paint as a defensive mechanism" and that "paint is not bullets."

Trump is following in the footsteps of his most adamant supporters — and Fox News host Tucker Carlson — who have rallied around Rittenhouse, declaring him a hero and martyr who acted only in "self-defense".

Now the baton has been picked up by at least one Republican senator, Ron Johnson of Wisconsin, who told CNN that he approves of "citizen soldiers" showing up to "overwhelm the number of rioters."

It is worth pointing out once again that while Republicans characterize virtually all Black Lives Matter protesters as "rioters," the vast majority have been peaceful. And even in places like Kenosha and Portland, which have seen some acts of property destruction and some protesters arrested for nonviolent offenses the unrest was largely sparked by police crackdowns, often with tear gas and violent assaults.

Obviously, we don't know all the facts in the Rittenhouse case, and he will clearly get a zealous legal defense. What is not in dispute is that if Rittenhouse had simply stayed home and minded his own business, two other men would not have died and he wouldn't be facing murder charges.

Similarly, the caravans of armed Trump supporters in Portland and elsewhere are deliberately fashioning themselves as an invading army, organizing to "liberate" "Democrat cities," as Trump would put it. They're outsiders coming in to conquer, or at least that's very much the message they're sending.

Let's set aside the legal specifics of what constitutes "self-defense" for a moment, and look at the big picture. We're talking about people who pick up weapons and deliberately go out, most often to other cities and towns, looking for trouble.

That behavior is outright aggression, to anyone with common sense. But Trump and his allies are trying to redefine it as "self-defense."

This all follows last week's Republican National Convention, which featured Mark and Patricia McCloskey, the St. Louis couple who were charged with a crime after threatening a bunch of BLM protesters with guns for the perceived crime of marching on a public street.

Again, the fact that the McCloskeys were the aggressors really should be beyond dispute. The protesters they threatened had done nothing to them, and in fact were merely walking past on their way to the mayor's house, which is nearby. But the McCloskeys and their defenders have continued to insist that this too was "self-defense."

"What you saw happen to us could just as easily happen to any of you," Patricia McCloskey said in the bizarre video the couple taped for the RNC, painting herself and her husband as victims of some kind of terrible invasion, instead of instigators who threatened people who had done nothing more than exercise their constitutional rights.

Welcome to the upside-down logic of TrumpWorld, where our president openly encourages violence and crime while claiming to be for "law and order," and defines acts of armed aggression, as long as white conservatives are the aggressors, as justified self-defense.

This is typical Trumpian projection, of course. He's always accusing his opponents of doing the thing that he's actually doing, to the point where any Trump accusation should be presumed to be a confession.

This mentality doesn't just flow from Trump's own psychological damage. This redefinition of right-wing violence as "self-defense" comes straight from the outsized sense of entitlement that defines modern conservatism. These are folks who believe that America belongs to them and only them, and anyone who looks or behaves different than them — because they're not white or not Christian or simply because they have progressive values — is a threat, by definition.

We can see this in the behavior of the McCloskeys, who keep yammering about "private property," even though the protesters they menaced were walking down a public street. But it's clear enough that people like them view America itself as "private" property that belongs only to them and people who look, think and act the way they do. Everyone else is a trespasser — especially if they dare to express their views.

If other people are a threat simply for existing, then it's no great leap to argue that hostility or violence toward those people is a form of self-defense.

As Jamie Jeffers, a history podcaster who lives in Portland, recently explained in a viral Twitter thread, "Portland is a deep blue dot in a sea of red, and that fact is bitterly resented by many Republicans in the surrounding towns," because Portland liberals are "seen as living in their territory."

That's how right-wingers can literally invade a city to terrorize the people living there, and justify that as somehow an act of "self-defense."

This redefinition of aggression has been going on for decades on the American right, fueled in large part by the NRA and the gun industry. The gun lobby has repeatedly claimed that using a gun in self-defense is a common event, often going so far as to allege that Americans defend themselves with guns millions of times a year. But the Harvard Injury Control Research Center dug into those statistics and found that most of the incidents described as "self-defense" actually involved people using guns to escalate interpersonal conflicts and intimidate people — situations where simply walking away would have been a vastly safer option.

Unfortunately, a lot of states, under gun-lobby pressure, have legally redefined self-defense in ways that encourage this kind of escalation. The result, research shows, is that rates of shooting homicides rise, because people feel entitled to pick fights, and when their targets fight back, to shoot first and claim self-defense.

We saw how this can play out in the infamous 2012 shooting of 17-year-old Trayvon Martin by George Zimmerman. What is indisputable about that case is that Zimmerman saw Martin returning home after walking to the convenience store and started following him for no good reason, other than than he thought Martin looked "suspicious".

Zimmerman's self-defense argument was that after he chased Martin down, Martin put up a fight and Zimmerman felt compelled to shoot him dead. Of course, if Zimmerman had simply left Martin alone, as a 911 operator specifically asked him to do, none of that would have happened.

The right to self-defense is enshrined in the law: It's supposed to be a right to take actions that are necessary to protect one's life or the lives of others. But in Trump's America, the right to "self-defense" has become a question of identity. White conservatives get to claim self-defense, no matter how clearly they instigate violence, because they view the rest of us as inherently threatening.

Giving right-wingers carte blanche for acts of violence, under the guise of self-defense, clearly raises the tension at an incredibly tense moment in America. That's what Donald Trump wants, of course. He is trailing Joe Biden in the polls, and clearly intends to claim the election was "rigged" if he loses. If you're planning to reject election results, and to refuse to accede to the peaceful transfer of power, it would sure help to have masses of armed supporters who believe that it's acceptable to shoot first in the name of "self-defense." That's exactly the army Trump is hoping to build with this reckless rhetoric.